We are not amused: How politics kills our language and clouds our judgment

A front page Seattle Times story published on June 24, 2016  decries an attack on “transgender” activist Michael Volz that happened in Seattle two days earlier. Such attacks are a serious matter, deserving of coverage. However, the Times’ handling of this relatively minor story, at the same time they were neglecting a much more important one, is evidence of a worrying new confluence of politics and journalism in the Emerald City.

The attack victim, one Michael Volz – whom I’ll take to be a male because he has a male name and looks like a guy to me – announced to reporters that he has abandoned gender-specific pronouns in reference to himself . . .

Volz — who uses them/their/they pronouns — spoke briefly at a news conference Friday at Cal Anderson Park, before the start of the fourth annual Trans Pride Seattle march, part of the weekend-long Pride festivities. 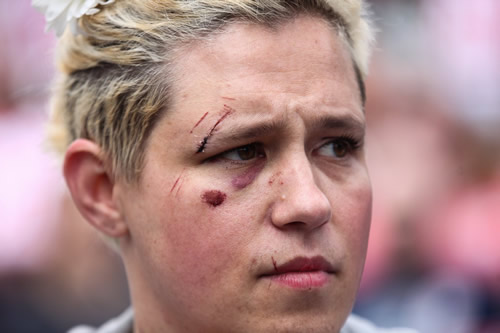 So it seems that this Volz, who looks to be about 20 – thinks he can create new English grammar rules as easily as he can change his own gender. All he has to do is announce that he’s a they and POOF! – he’s a they. Just like Queen Elizabeth is a we. 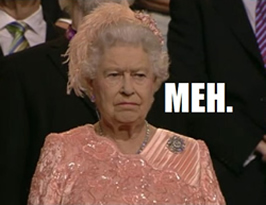 Of course, it’s Mr. Volz’s prerogative to use whatever pronouns he wants in the privacy of his own world. He can go around speaking Vulcan if he feels like it. But I don’t have to answer him in Vulcan or to use Vulcan when discussing him. Because that’s my prerogative. It seems that the Times is not with me on this, though. They seem happy to play Mr. Volz’s game, no matter how foolish they look. Behold:

According to Askini and Seattle police, Volz left the fundraiser at Neumos [bar] around 11:30 p.m. Wednesday and was walking to their car when a man confronted them at 11th Avenue and Pike Street. The unknown assailant said, “Hey, happy Pride,” then made an offensive, sexualized comment before attacking Volz, forcing them to the ground, choking them and repeatedly punching them in the face, Askini said in an interview.

Uh, how’s that again? Volz was walking to “their” car? –Whose car? The cops’ car? Neumos’ car?

Forcing “them” to the ground? Choking “them”? Huh?

Can you see why this is a problem? How many people were attacked here, exactly? –Just one, right? But the Times story says something else altogether. Times editors are making fools of themselves and befuddling their readers, just to avoid offending a single person who thinks our old-fashioned grammar doesn’t apply to him. Just like our old-fashioned gender concepts. 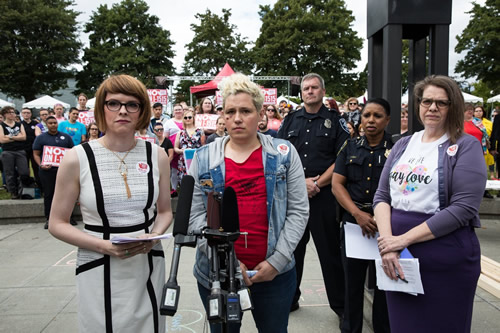 This new pronouns thing would all be droll if it wasn’t symptomatic of a much deeper problem at the Times news desk. Sixteen days earlier, on June 8, the Seattle Post-Intelligencer online newspaper broke a story about a Seattle police detective who punted on at least a dozen rape and sex abuse investigations because she was overworked and too embarrassed to admit it to her supervisors. As a result of her failure, suspected rapists were allowed to go free for years while their victims, fearful of retaliation, were left to wonder whether the cops had dropped their cases without telling them. Some investigations were so compromised, after sitting untouched in the stack for years, that they had to be dropped. See my post on that here.

The botched rape investigations are a big story. Certainly a bigger story than Mr. Volz’s news conference. Yet the Times didn’t give them serious coverage until more than two weeks later, on June 24. Meanwhile, the annual Gay Pride March was front-and-center at the Times, as if it were something that happened once in a lifetime, and not once a year.

To understand how a well-regarded, Pulitzer-winning paper like the Times, could have gotten so wrong-footed so quickly, you have to know something about the political climate in Seattle. Seattle’s been a liberal town as long as anyone can remember. But we’ve moved leftward at an increasing pace in the last decade as the blue/red divide deepens across the nation and ever more young people, immigrants, and minorities move here seeking a political and cultural climate that suits them. Our growing gay population has put us right up there with San Francisco in terms of percentages, and our political culture reflects that fact. The Human Rights Campaign gives us top ratings in ALL categories of their “Municipal Equality Index” scorecard.

We have a gay commission, a gay newspaper, a gay Yellow Pages and so on. (Need a gay-friendly accountant to do your gay taxes? We guarantee that our accountants will not scribble homophobic slurs all over your 1040!)

Our Mayor, Ed Murray, is an international gay poster child, lecturing Ireland on gay marriage one day, banning city travel to the barbarian state of North Carolina the next. Back home, Murray has lobbied successfully for all-gender public restrooms in Seattle and uses his bully podium almost daily to call for new programs for gays in the City. Seattle is now a gay town, and the Mayor is one gay guy you especially do not wanna cross. Not if you wanna sell newspapers.

On the same day the Times was front-paging the “attack on transgender activist” story (and ignoring the rape story), they were covering a Seattle Police initiative to provide “safe places” in the business community for gay and transgender people. 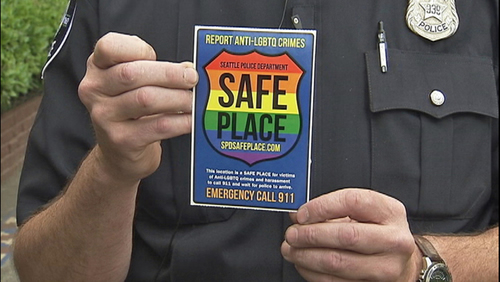 Participating businesses display this decal in their shop windows to show how much they care. Or maybe it’s just another form of virtue signalling – a way to drum up business by identifying yourself as one of the good guys. I suppose it would be the equivalent of sporting an American flag or a Christian fish on your storefront in a place like North Carolina. 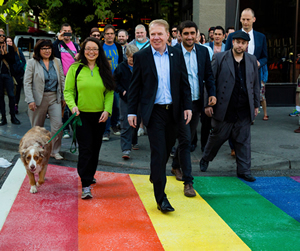 If you were a tourist and didn’t know anything about Seattle, you might assume that Seattle is a dangerous place for gays. And indeed, if you go by these safe-place stickers, or by Mayor Murray’s initiatives, or the Seattle Times reporting, it is. But if you go by actual crime stats, and the Human Rights Campaign’s scorecard . . . it’s not. If you go by the facts, Seattle is a reasonably safe place for gay people, just as it is for straights. (In 2014, Seattle was about halfway down a list of 8o large US cities sorted by violent crime rate.) In any case, the Mayor’s agenda seems to be less about public safety and more about publicity for himself and his gay constituency. But it’s not like he doesn’t believe his dark vision. In his model of the world, gay and transgendered folks, for all their recent advances, are still delicate flowers who will always need to be given an extra measure of protection by government. Even if they are the government. Meanwhile, the Seattle Times and SPD are doing their bit, bastardizing the English language and turning common sense on its head. Just to show the Mayor that they get it.

I wonder: Is this really how you do gay people a service? By doing a disservice to everyone else?  If that’s what gay rights is about, then you can count me out.

1 Response to We are not amused: How politics kills our language and clouds our judgment