The material below was sent to the Safe Seattle Facebook page over a period of several days by a reader who was unhappy about the behavior of a man named Christopher Peguero, who was running for the District 2 council seat. 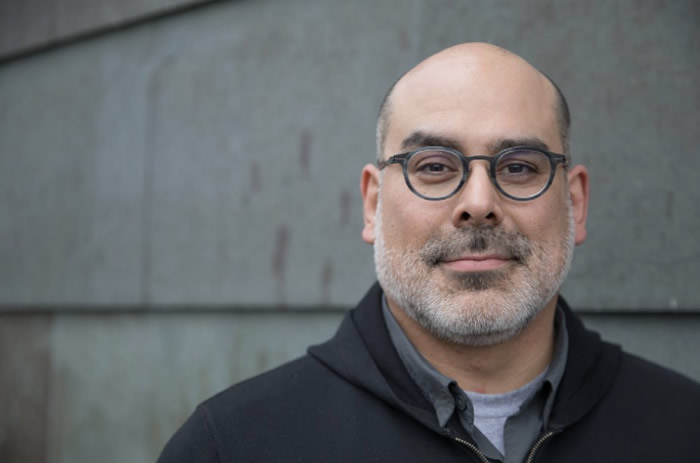 >>Hello Safe Seattle. I just stumbled upon your FB group. I was researching a few people running for my council District 2, which brought me to your page. Anyhow… If I wanted to post something anonymously. How would I do that? I saw some social media posts by someone running for D2, and I think this information should be more public. But, with that being said, I’d like to remain anonymous, as I don’t need the backlash from friends, family or anyone that doesn’t agree with my thoughts.

I live in D2 and was upset after I went through some candidate profiles for my district.  First, I was unhappy that two candidates, Tammy Morales and Christopher Peguero, did not attend the Speak Out Seattle forum several weeks ago. Then I wanted to learn more and went through their FB profile. It seems to me that voters should know more about the rhetoric of this Peguero person. He is very prejudiced with the comments he makes. I find it to be very frustrating, especially being that, like him, I’m of Hispanic background, too. He doesn’t speak for me, and I want to let others know that.

Here are some screen shots of things he’s said: 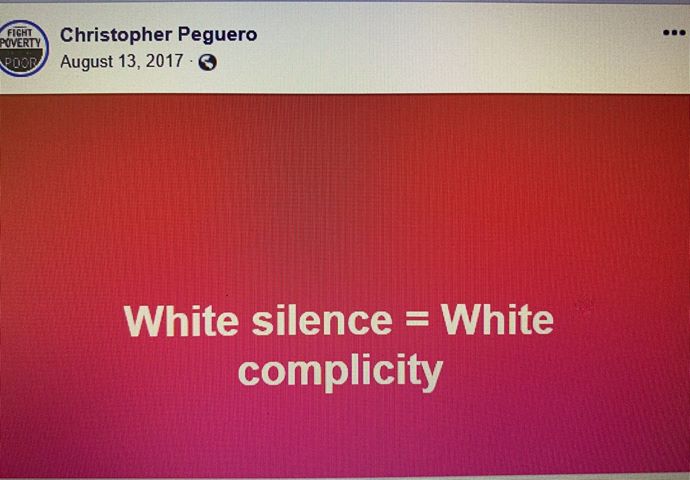 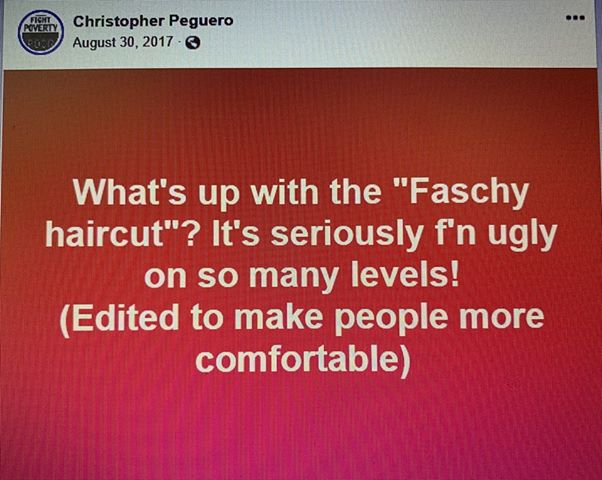 Blog Quixotic note: Peguero must have gotten some push back on his haircut posts, because he later edited one of them. Unfortunately, the edit just made it worse: 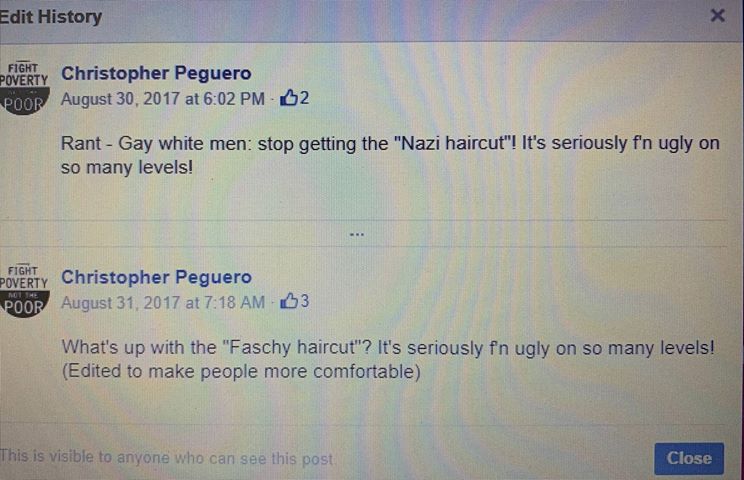 Blog Quixotic: “Faschy” is short for “fascist.” Peguero is referring to a hairstyle that has recently become popular among young white males. The style – a modified mullet cut – has a shock of hair combed back or to the side with the hair on the temples shaved clean. Self-styled social justice activists have likened it to haircuts favored by Nazi party members in the 1930s, implying that people who sport the hair style are signaling their sympathy with fascist ideals. There is no support for this claim, though. 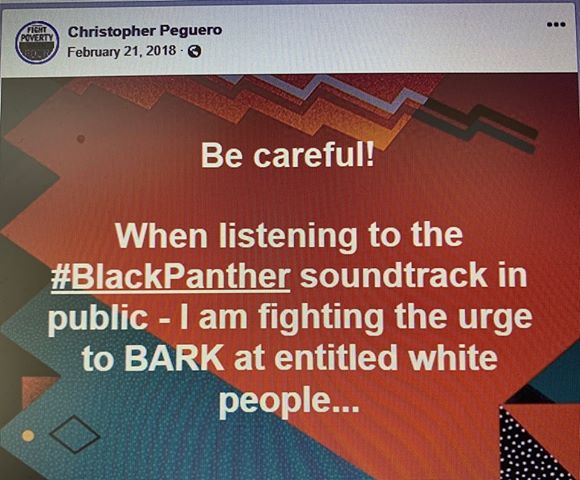 Bloq Quixotic: Black Panther is a groundbreaking film about a black superhero. It was the subject of controversy over whether white people should be “allowed” to celebrate (read: appropriate) its black protagonist. 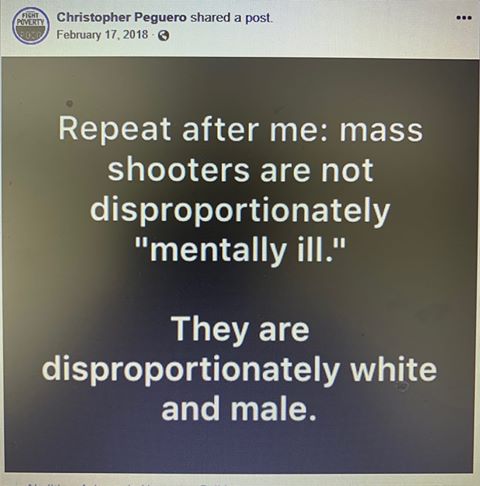 Safe Seattle reader: I feel that a council member should be all inclusive.  not anti white or anti anyone.  I have about 30 more images of slamming of white people.  This rhetoric does not help our end result of coming together.  But then again, that is just my opinion. 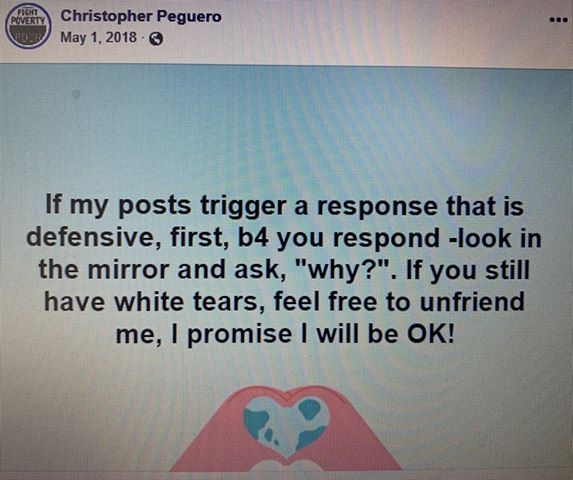 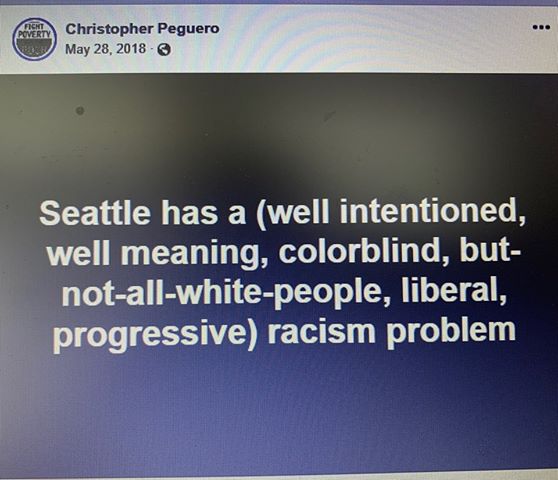 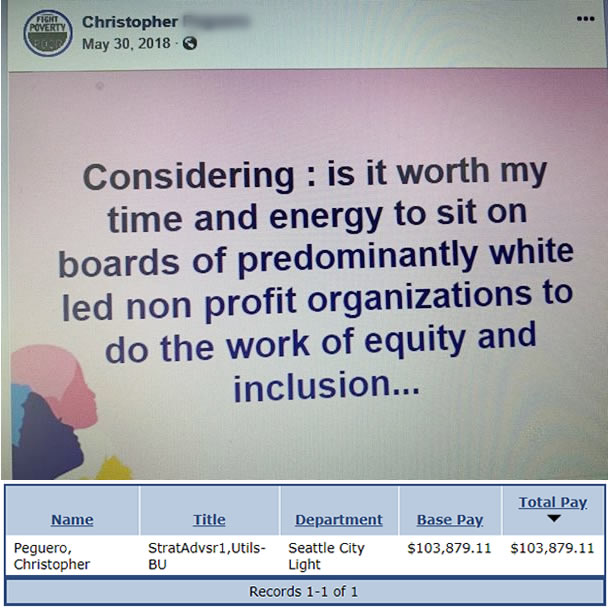 Blog Quixotic: Peguero works for Seattle City Light as some sort of “race and social justice” advisor. Why a city utility needs such a position is unclear. His salary is listed below the screenshot. 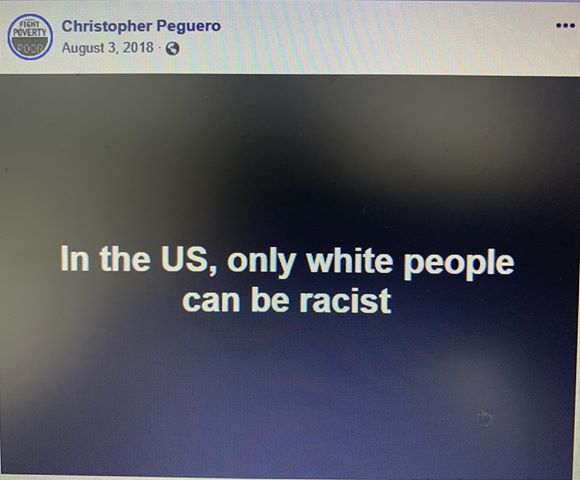 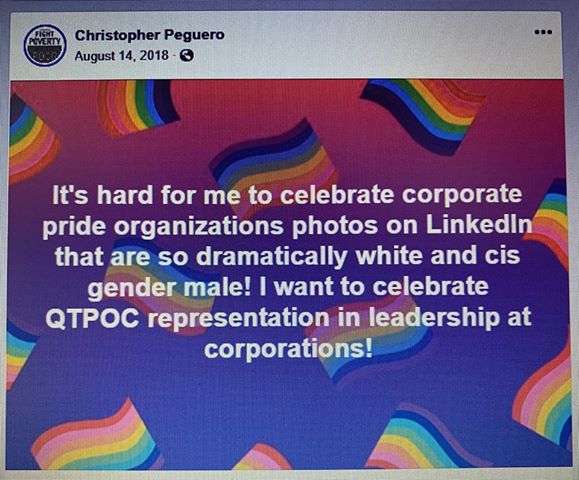 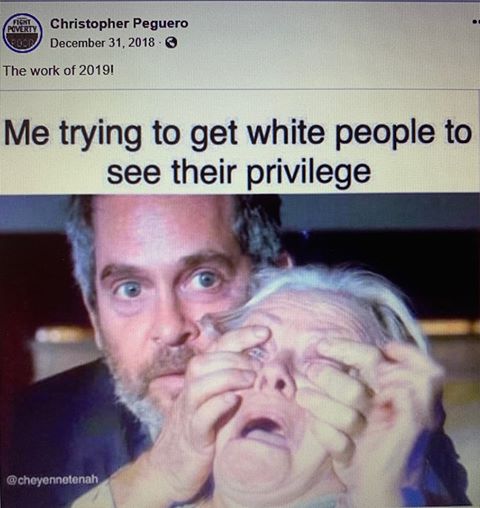 Image is from the 2018 horror filmBird Box 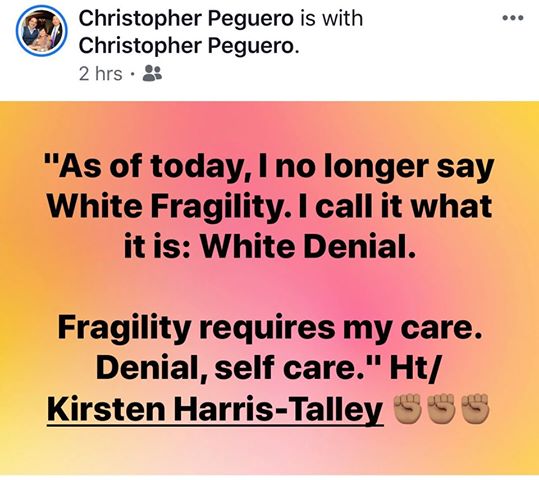 Note: Kirsten Harris-Talley is a former Seattle councilmember and is a social justice activist, like Peguero. 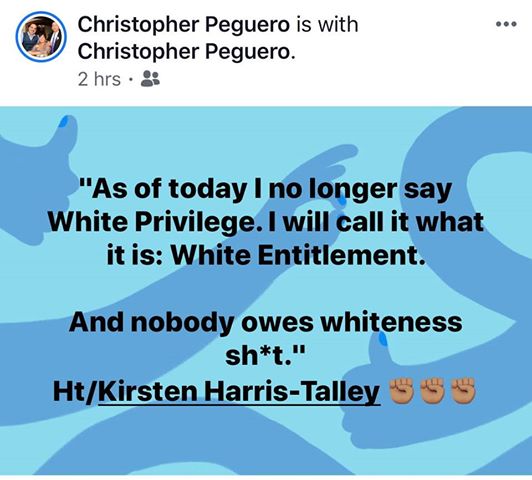 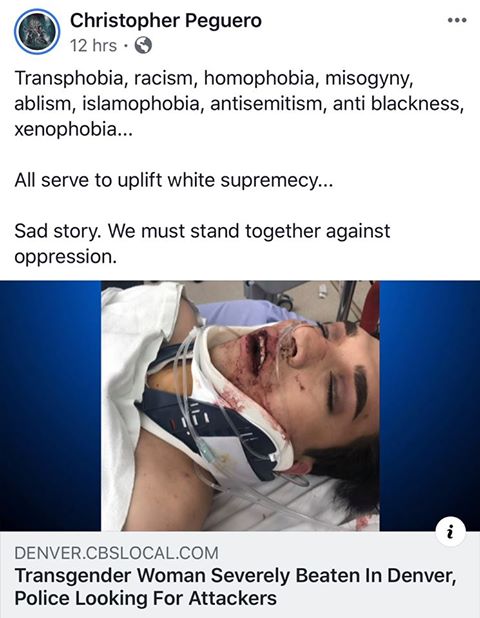 Blog Quixotic note: In the post above, Peguero speaks of anti-Semitism, but in his district race there was an Orthodox Jewish man, Ari Hoffman, who had been the subject of vicious anti-Semitic attacks that Peguero was slow to condemn and condemned only weakly. One of Peguero’s supporters, a man named Matt “Spek” Watson, has a history of making borderline anti-Semitic comments on social media. Watson has been a fierce of critic of Hoffman’s. See Watson’s tweets here.

Below: In April 2019 the Safe Seattle Facebook page began posting screenshots of Peguero’s comments, accompanied by critical analysis. On April 26, Peguero responded on his own page. Note how, in the same breath that he refers to Safe Seattle as “racist,” he claims that he will not fight back against their criticism of him. 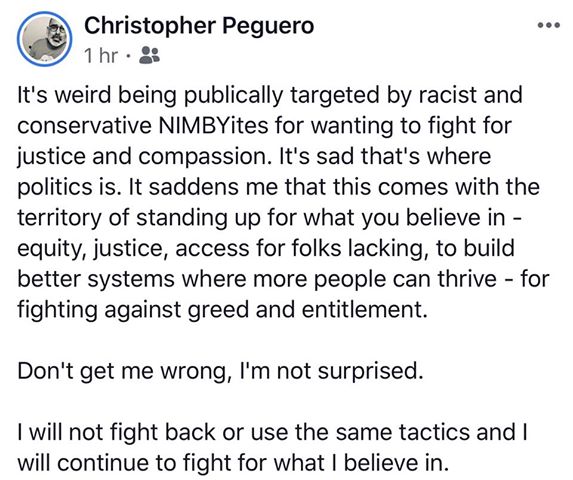 Peguero was one of seven candidates in the District 2 race, and it’s fair to say that he was the most left-leaning among them. He boycotted the first public forum of the campaign season because it was sponsored by the neighborhood group Speak Out Seattle, whom he considered too conservative. He was joined in the boycott by another social justice activist candidate named Tammy Morales, whom our source mentioned above.

Washington is a “Top 2” primary state. Peguero was eliminated in the August 6th primary election.

(But see more Peguero posts below. These were posted after this article was published.) 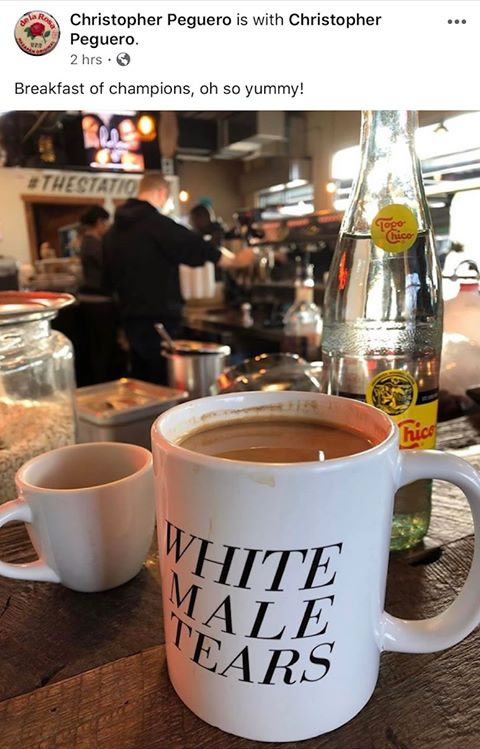