Being a collection of images related to the taking of candidate Ari Hoffman’s yard signs in the 2019 District 2 Seattle City Council race.

August 6, 2019. Election eve. A self-styled comedian and Morales supporter named Brett Hamil boasts about stealing one of Hoffman’s signs and then urinating on it. Is his claim a truthful one? It’s hard to tell. But the sign in the picture was definitely removed from some place. Hamil has a history of making intimidating statements against candidates and public figures he doesn’t like. 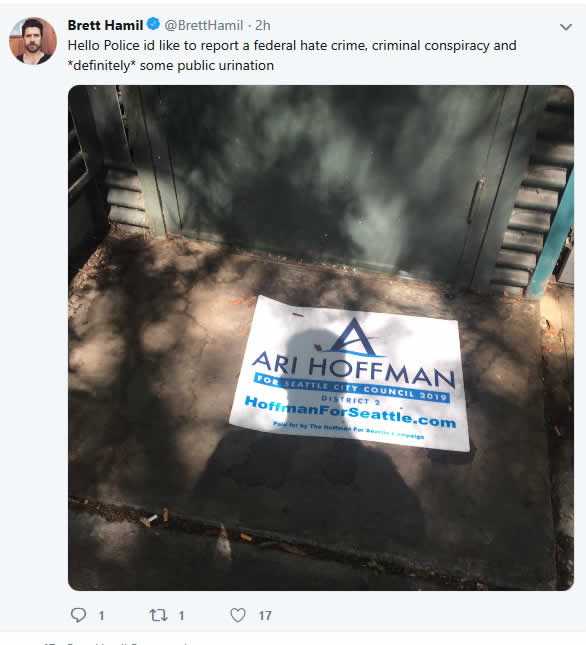 August 3, 2019. Three days before the election.  The woman below was photographed acting with an accomplice to remove several signs (some of them on private property) in the vicinity of South Morgan and Martin Luther King Way South in the Hillman City neighborhood of southeast Seattle. 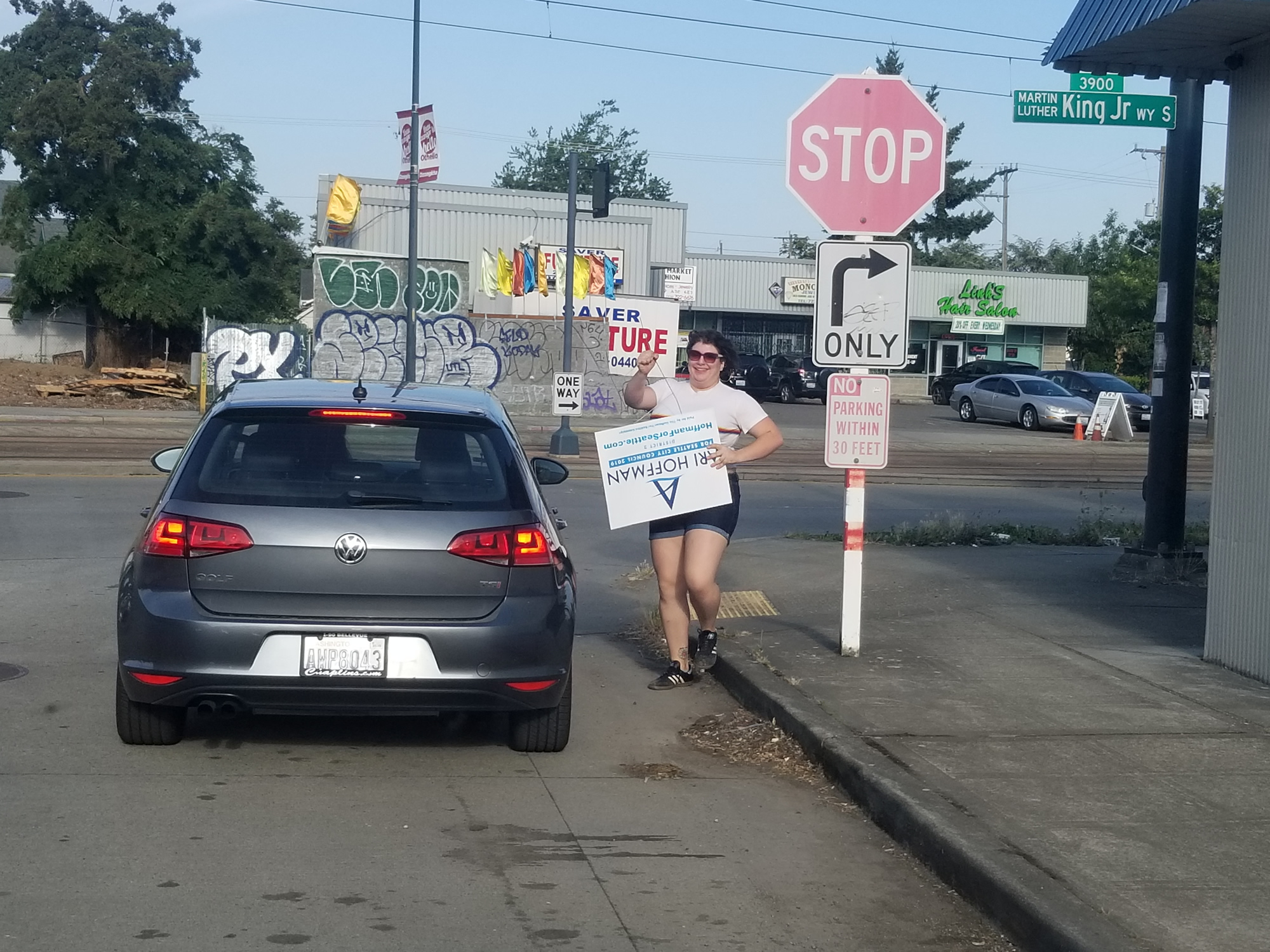 This man, “Goldy” (real name: David Goldstein) is a former writer for the left-wing Stranger newspaper. writer and is a current senior fellow at Nick Hanauer’s Civic Ventures think tank. He is also an associate of a man named Matt “Spek” Watson, whose tweets you will see below. Goldstein and Watson have kept up an ongoing sarcastic banter about the two of them taking Hoffman’s yard signs, implying that Hoffman was imagining it all. 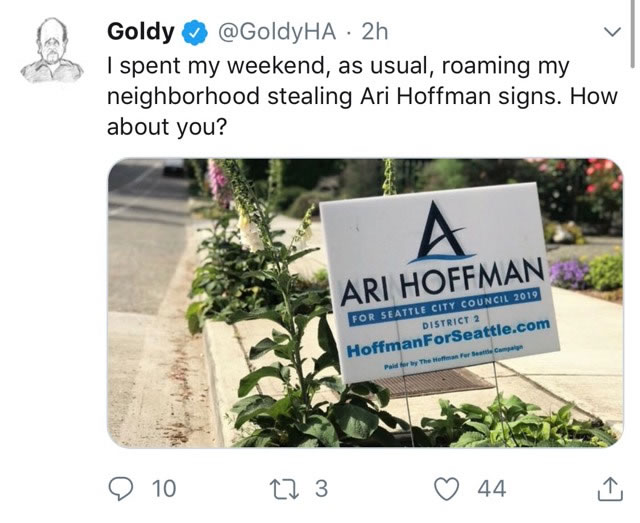 (In June, Watson got a visit from the Secret Service (or so he claims) who were acting on a series of social media posts he made menacing President Trump and ICE agents. Watson claimed his threats weren’t intended to be taken seriously.)

The city of Seattle has rules on where political yard signs may not be placed, but these rules are typically not enforced. Meanwhile, the city makes it clear that citizens are not allowed to pull yard signs on their own.

August 5, 2019 This person implied, in a comment on the Safe Seattle Facebook page, that citizens were justified in removing Hoffman’s yard signs on their own if they had determined that they were illegally placed. He implies (without any evidence) that people who support Ari Hoffman are criminals. Or perhaps he implies that putting yard signs in a public place makes one a criminal.

August 5, 2019. The man below, Dae Shik Kim Hawkins, Jr., is a political correspondent for Crosscut online magazine and has worked as a campaign consultant for Hoffman’s opponent, Tammy Morales. He claims that posting the photo of the woman taking the signs above constitutes “cyber bullying.” Meanwhile, he claims to have been witness to people removing Hoffman’s signs.

One day earlier, on August 4, 2019, Hawkins had shared one of “Spek” Watson’s tweets on the sign stealing woman above and claimed that he would taking more of Hoffman’s signs himself. The “blackmail” Watson mentions in his tweet refers to a demand made by Safe Seattle that Hoffman’s opponent Tammy Morales denounce the sign stealing. 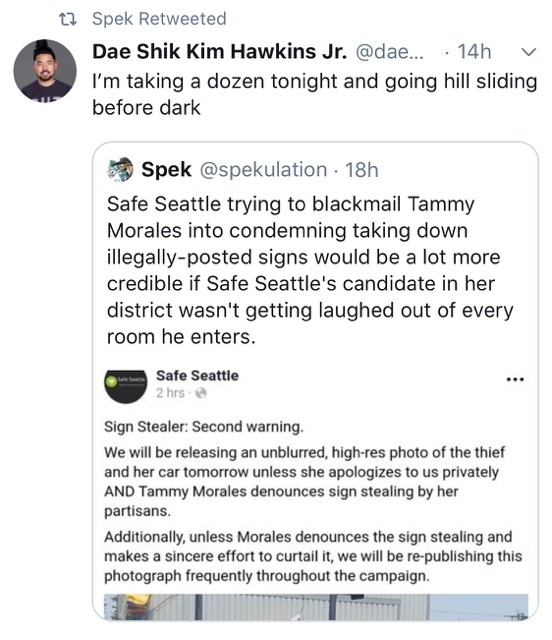 Late May 2019 The epidemic of sign theft apparently started when a woman named Dana Math who posts on the Columbia City Facebook page claimed to have taken some Hoffman signs she found in traffic roundabouts. The “Bruce” she refers to is District 2 incumbent Bruce Harrell who vacated the seat Hoffman is running for.

Hoffman reported that his signs were also being pulled from private property in his neighborhood at the same time….

Soon after Ms. Math posted her comments on Facebook, Hoffman started getting a rash of tweets from people who were also claiming to be pulling his signs. Sometimes they would add a note about how the signs were being pulled only from public property, but this is still illegal, even if the signs have been placed on public property illegally in the first place. 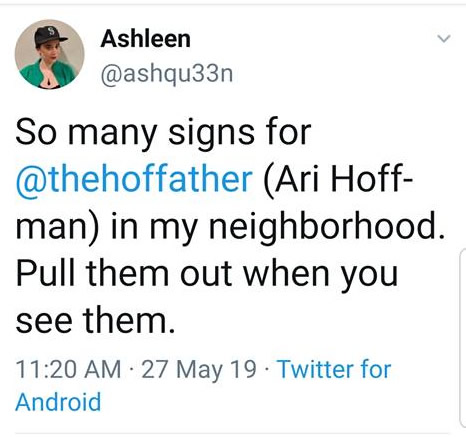 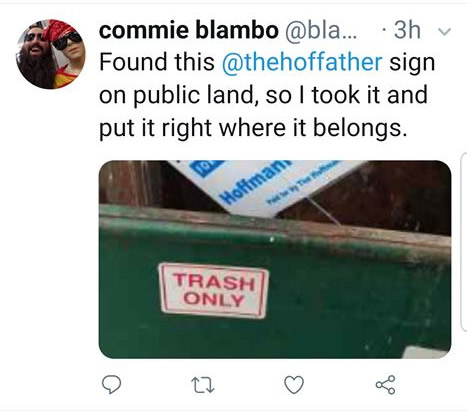 Meanwhile, Hoffman was reporting that people were pulling his signs from private as well as public property. After Hoffman reported the thefts to Seattle police, “Spek” Watson illegally obtained a copy of Hoffman’s 911 call and published it on his Twitter page, ridiculing Hoffman as he did.

It’s all fun and games until someone gets a death threat:
“Spek” Watson and Anti-Semitism in the District 2 Race

Seattle is a very liberal city, and although Ari Hoffman has broad support within his District 2 community, he can fairly be described as a center-right candidate. He runs a business in the industrial sector of south Seattle and as a candidate he has been vocal about enforcing the laws against the public camping and drug use that plague the local neighborhoods. This had led some people, particularly those on the far left, to characterize Hoffman as a “homeless hater.”

“Spek” Watson is a paradoxical character. He’s a white man who performs hip-hop music, a privileged stay-at-home dad who has an outsize persona as an all-purpose wiseguy and online social justice warrior. Over the years, he’s amassed a large following on social media, where he emits a daily stream of ridicule against those whom he considers enemies of the people.

Soon after after Hoffman declared for the District 2 seat, Watson and his friends began publicly accusing him, without evidence, of supporting vigilante actions against homeless people, proposing to round them up and put them in work camps, and so on. Leftist news outlets like The Stranger, looking to turn up the heat and paint District 2 as an ideological battleground, began quoting Watson in their coverage, which spurred him to new heights of invective.

Watson has connections with the local Antifa group (Emerald City Antifa). He’s also a supporter of the controversial BDS (Boycott-Divest-Sanction Israel) movement – a phenomenon considered by many supporters of Israel to be motivated by anti-Semitism – and has a history of borderline anti-Semitic statements against Israel (see below). 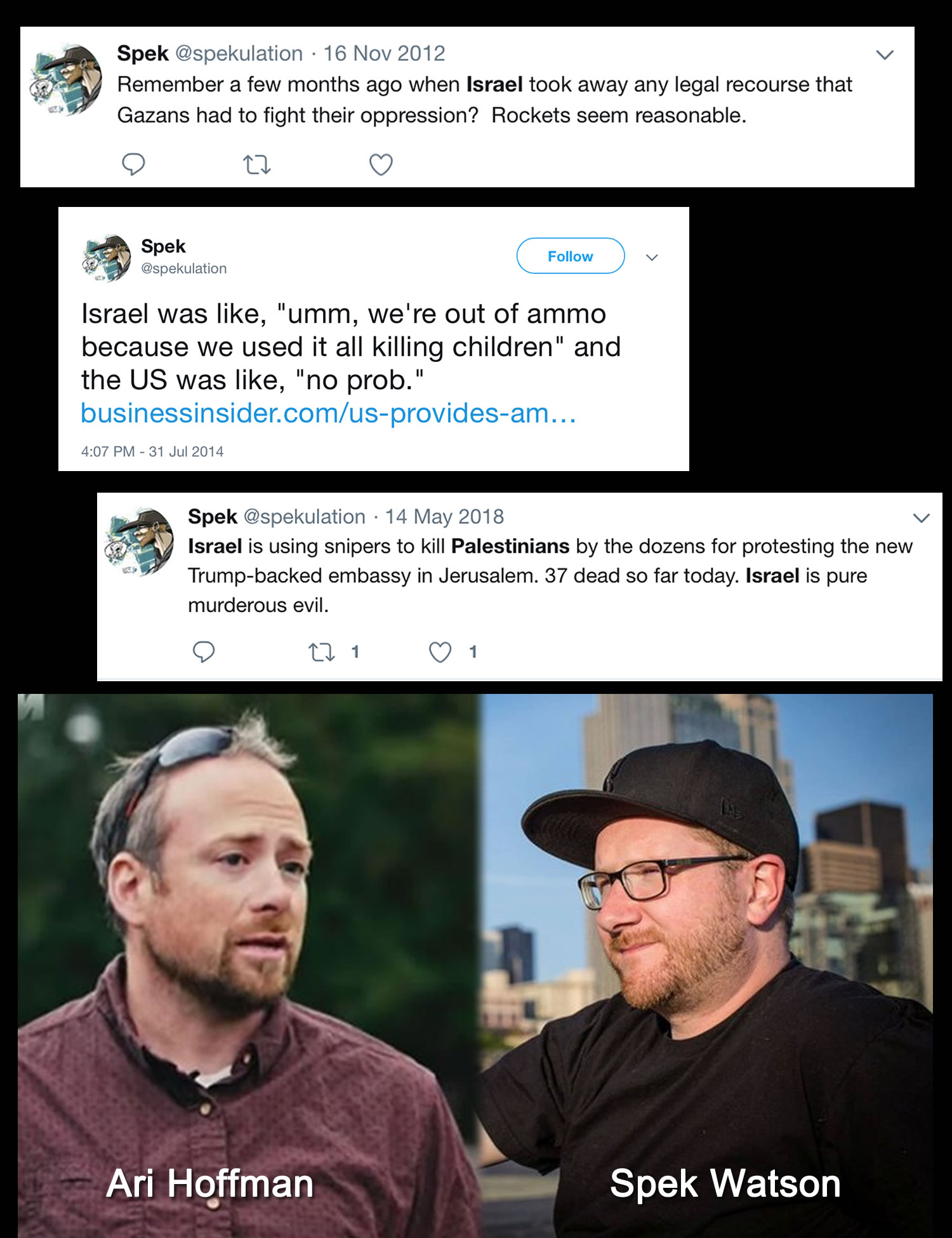 In the context of the District 2 race, Watson’s background takes on special significance, since Hoffman is an Orthodox Jew with a strong affinity for Israel.

Given Watson’s considerable reach on social media, his known position on Israel, and his daily slams against Hoffman, a visibly Jewish man, it is not just possible but likely that his comments would be picked up by those who had an even darker view Hoffman than he did. In early June, as Hoffman’s campaign began picking up steam, an alt-right online group calling itself 8Chan began making detailed threats against Hoffman and his family, couching them in classically anti-Semitic terms.

That prompted an FBI investigation, and soon after, 8Chan was shut down. Since then, the most virulent attacks against Hoffman have subsided, but meanwhile, the sign stealing and public ridicule, spearheaded by Watson and his friends, goes on.

2 Responses to The Stealers