In the wake of last month’s mass shooting at an Orlando Florida gay nightclub, Erin Palette, a Daytona Beach-based transgender woman, founded the LGBTQ gun advocacy group Operation Blazing Sword. I contacted her through the organization’s page on Facebook, and she agreed to answer a few questions.

TBQ: How big is your operation and what do you do, exactly?

EP: Operation Blazing Sword is, at the moment, a database of firearms enthusiasts who are willing to teach the basics of firearm operations and safety to members of the LGBTQ community in the wake of the Orlando Pulse murders. Right now, if someone wants training, they go to our map, search for their hometown, find an instructor closest to them and make contact. We have plans to expand our remit once we become a 501c3 charity, but until then we are basically a matchmaking service between instructors and the gun-curious.

I ought to clarify that this isn’t JUST for LGBTQ people; the offer is open to everyone. We just emphasize that our instructors are LGBTQ-friendly because, historically, the media has led Americans to believe that gun owners are conservatives who hate people who aren’t heterosexual, and that LGBTQ people are liberals who who hate guns and anyone who owns them. Blazing Sword is outreach, across the political divide, with gun owners saying “We don’t hate you. We want you to be able to defend yourselves against violence. We don’t care who you sleep with; self-defense is a human right.”

The number of volunteer instructors is difficult to count. We have 781 pins, each representing a city or town. However, some pins have more than one instructor, especially in big cities. The last time I checked, about 100 pins ago, we had over 1,000 volunteers across every state in the union as well as the US Virgin Islands and even Canada. 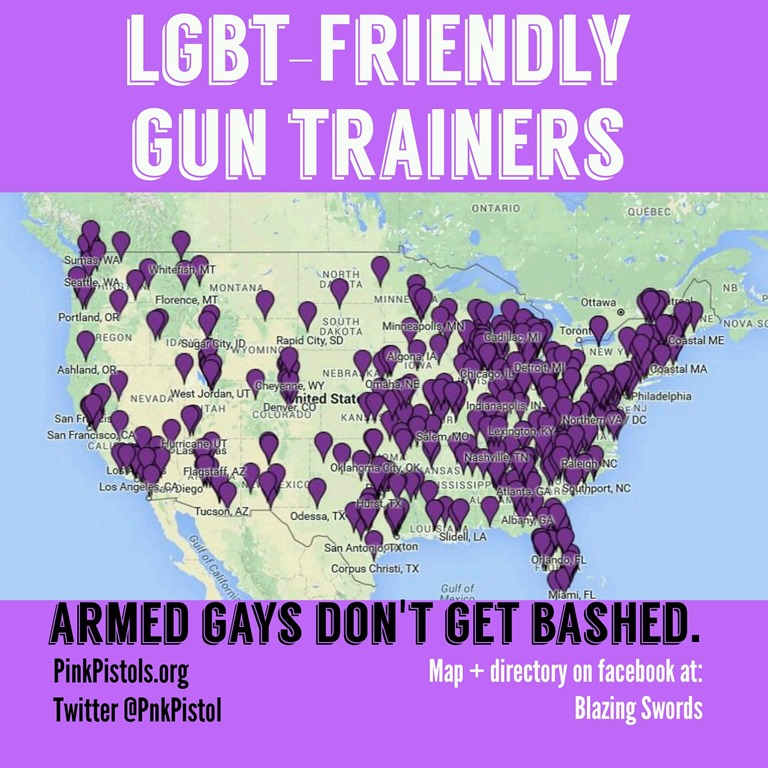 TBQ: How did you come up with the term “Blazing Sword”?

EP: It’s a very nerdy reference… when I first started collecting a list of trainers, someone suggested that I needed to coordinate with Pink Pistols. I said that I was in close communication with Gwen Patton, the First Speaker of PP, but that she was swamped dealing with the press, and when things calmed down and we could catch our breath we’d form up like Voltron. (Voltron, for those who don’t know, was a cartoon in the 1980s. It featured five mechanical lions that would combine into Voltron, a larger robot. During the transformation sequence the leader would should “Form feet and legs! Form arms and body! And I’ll form the head!”) So when Gwen replied to my “form up like Voltron” comment with “And I’ll form the head!”, it doubled down on the nerdery. And by this point, the project – which had become so massive that I’d recruited volunteers to help me process all the names and locations for trainers – required a name other than “the project.” So I decided to make another nerdy reference by calling it Project Blazing Sword, because Voltron’s main weapon was, you guessed it, the Blazing Sword. I was making a joke and didn’t think anyone would take it seriously. But people thought it was awesome and started calling it Blazing Sword, so now that’s the official name.

TBQ: How long have you been a gun owner? Do you feel safer because you carry a weapon?

EP: I have always been pro-gun, due to growing up in a military family, but I didn’t buy my first firearm until 2010. “Safer” is a poor choice of words, because it assumes the mere presence of a gun, like a talisman, will keep you safe. Fire extinguishers don’t keep you safe from fires; they simply give you a tool to fight the fire until the fire department arrives. First aid kits don’t keep you safe from injuries; they simply give you a tool to manage injuries until paramedics show up.

A gun is the same way: it gives me another option when confronted with violent crime. Without a gun, my options are “Become a victim” or “Try to get away and hope I don’t get hurt in the process.” With a gun, I am given the third option of “Defend myself until the police arrive.” And it really is an option: sometimes the best way to defend yourself is to get away.

So having a gun makes me feel like I am better prepared. 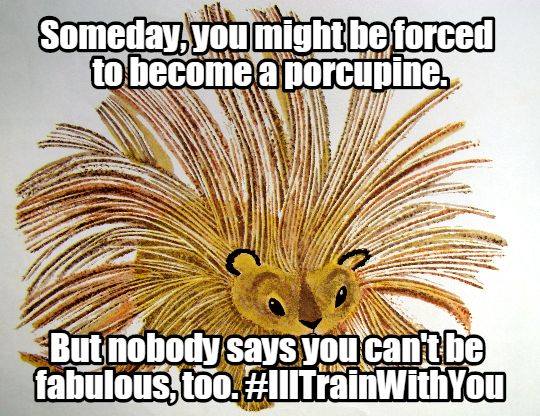 TBQ: Is it your sense that the LGBTQ community wants to fight back after Orlando? If so, why now? Hate crime against gays is nothing new . . .

EP: First, I can’t speak for the LGBTQ community. My sense, though, is that many within the community now realize that they are being specifically targeted for violence and that the police may not arrive in time to protect everybody. They are looking for more options other than “Hope for rescue” and “Die at the hands of a maniac,” and being a responsible gun owner is one of those options.

Why now, specifically? Previous to this (in my experience, to the best of my knowledge. etc etc…. I might have missed something historical), hate crimes against LGBTQs have been on the individual scale. This is the first (to my knowledge) attack where LGBTQ people – as a community, as a demographic – were specifically targeted en masse. That shifts the perception of violence from “Those people attacked that LGBTQ person” to “Some people actually want to kill all of us.”

TBQ: Is homophobia a special problem in the Muslim community? Or does it go beyond that?

EP: Owning guns has a a stigma within the LGBTQ community, to the extent that being gay and admitting you own a gun is another form of “coming out” with similar social repercussions. I could go into why I think this is, if you like, but this email is already pretty long.

As you can see from the massive response, hardly anyone in the gun community thinks this is a bad thing. We all enjoy shooting, and if we can teach our skills to new people who can join us in having fun at the range, that’s all that matters. 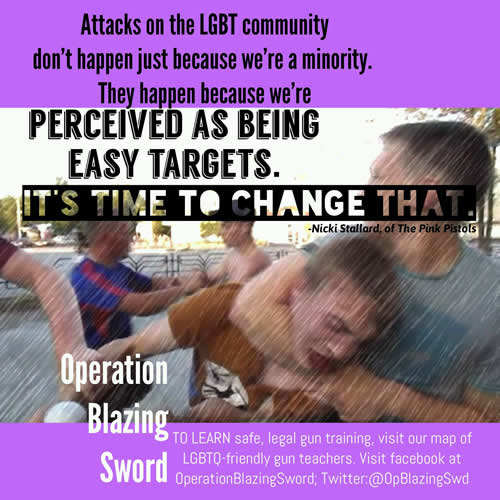 TBQ: Do LGBTQ people have special needs when it comes to arms training? Why couldn’t a gay or trans person get this training on their own? Why do they need to be part of a special group?

1) That question presupposes that there is a “standard” method of training which works for everyone. There’s no such thing. Just look at the popularity of “Women Only” firearm courses and you realize that women learn — and teach — differently from men. So LGBTQ people, just like everyone else, need to find a method of instruction that is comfortable for them.

2) They could, but the big problem is social conditioning. Again, LGBTQ people have been led to believe that gun owners are all fat white old heterosexual dudes who hate “them gays.”and so would be uncomfortable in asking for help. A straight person is far less likely to feel uncomfortable asking for help leaning to shoot.

3) It’s not a special group, it’s a special outreach. It’s like saying that one night a week is Ladies’ Night at a bar — does that mean men aren’t welcome at the bar that night? No, it’s just a desire to reach out to a specific demographic to make them feel more welcome. 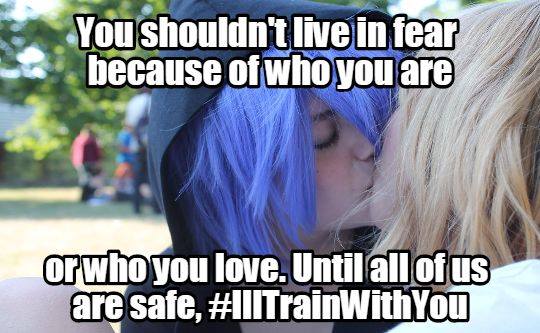 TBQ: Where would you like to see the group in five years?

EP: I’d like us to be a 501c3 charity that helps fund shooting classes for the disenfranchised — not just LGBTQ, but also the disabled, the elderly, anyone who wants to learn how to shoot but doesn’t feel comfortable going to a typical gun range.