The Case of the Missing Homeless Camp

Do you see a homeless camp in this picture? –Yeah. Neither do I.

So why was the landowner granted a two-year “transitional housing” property tax exemption on this pricey patch of real estate near downtown Seattle? Good question. Let’s take a look . . . 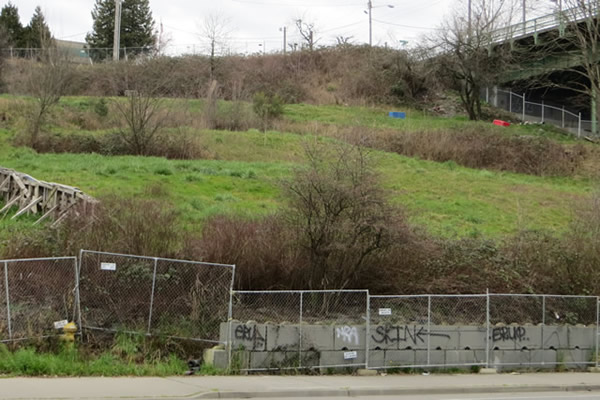 In December of 2014, landowner Chris Koh (dba ABCD Trust, Inc.) applied for and got a two-year tax exemption on the land in this picture, as well as land nearby. The exemption was granted under a Washington state law (RCW 84.36.042) that rewards private landowners who use their property to create emergency and transitional housing for homeless people. The RCW defines transitional housing as “a project that provides housing and supportive services to homeless persons or families for up to two years and that has as its purpose facilitating the movement of homeless persons and families into independent living.” The project has to be supervised by a qualified non-profit organization.

The exemption application process is managed by Washington State’s Department of Revenue (DOR), and it is extensive. The applicant first has to prove that he, or his agent, has a bona fide 501(c)3 non-profit organization to provide the housing and supportive services. He then needs to provide a detailed description of the services he’ll be giving people on the site and show that he has experience in this area. Finally, the applicant, or his agent, has to meet on-site with DOR staff so they can assure themselves that the project is feasible. According to the application for this particular project, the proposed homeless camp at the site would be sponsored by a local church – which is in accordance with another state law, RCW 36.01.290, that frees religious hosts from zoning restrictions that would ordinarily apply. According to the application documents, the church would lease the land from the owner, and the camp would be managed day-to-day by the Seattle Housing and Resource Effort (SHARE) and one of its confederate non-profits, the Low Income Housing Institute (LIHI).

In sum, the landowner wouldn’t have to do anything to get the tax benefit except defer using his property for some other purpose for the duration. We can surmise that not using this patch of land didn’t inconvenience Mr. Koh too much. Considering what Seattle land prices have been doing lately, he might even have come out well ahead by waiting for them to appreciate a bit more before selling or developing them. According to the King County Property Tax Division, the parcels of land Mr. Koh got the exemption for have appreciated about $400,000 in assessed value in just one year. Tax free.

The landowner, the pastor, SHARE and LIHI jumped through all of DOR’s hoops, and on June 12, 2015, an official determination was made to grant an exemption for up to two years for the eight Koh-owned parcels below. See the approval document here. 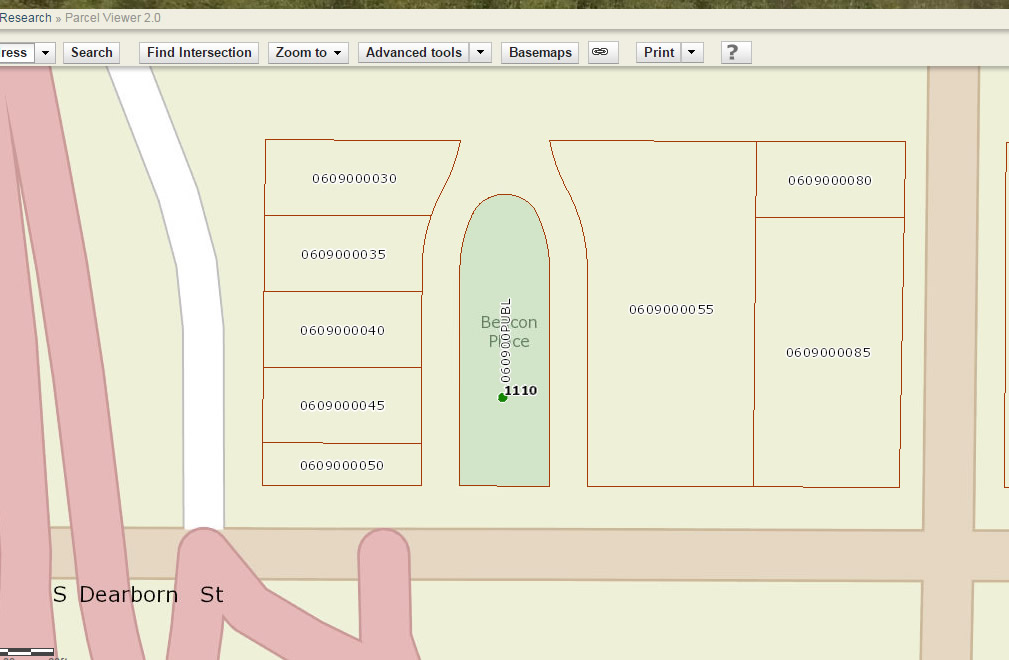 These parcels are in the 1000 block of South Dearborn Street, less than a mile from the heart of downtown Seattle. There are three parcels on the right/east side, five more parcels on the left/west side, and one slice of publicly owned land in the middle, shown as a dark green blob. The public parcel is owned by the City of Seattle and is currently undeveloped.

–Yes and no. There was a camp (“Nickelsville”) on the five parcels to the west. The camp was put up there in September of 2014, and it stayed until March of 2016, when a power struggle between residents and management ended with the expulsion of SHARE and its director, Scott Morrow (see more that story here and here).

Here is what that camp looked like. The shack at the bottom right-hand corner is at the eastern boundary of parcel 0609000050: 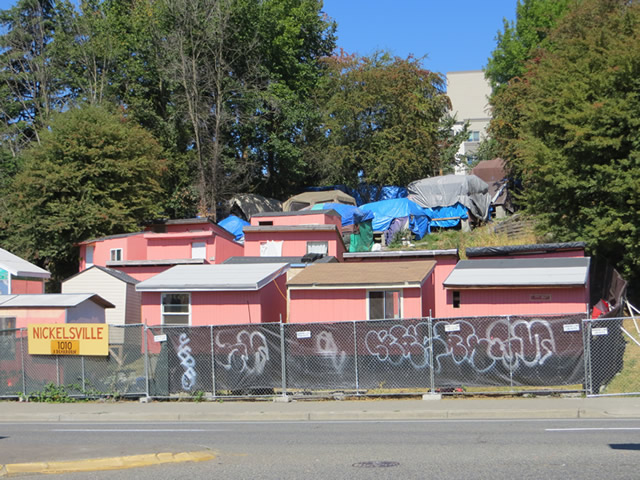 Here’s a picture of the public parcel in middle (0609ooPUBL) showing that same shack off to the left (west): 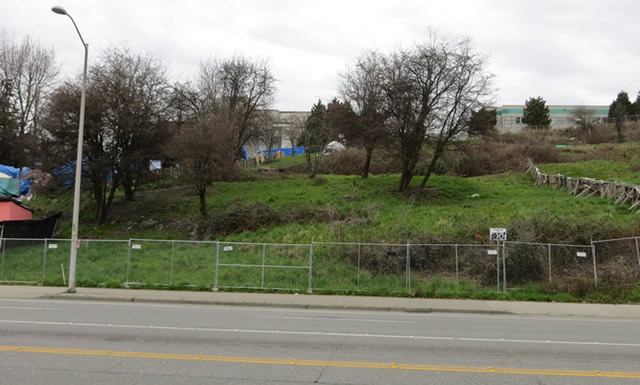 And here, once more, are the three eastern parcels:

Even though these eastern parcels – which form the larger chunk of land – were granted a tax exemption, I never saw any “transitional housing” structures or activity there on any of the three visits I made to the area during Nickelsville’s stay. Homeless campers I’ve talked with have confirmed this as well: There was no housing of any kind on that property, transitional or otherwise. In the picture, you can see a few large containers scattered about the ground. Those might have some connection to Nickelsville, but if so, it is a slender one. The application documents refer to the camp storing gardening material somewhere on the site, but there’s no reason that gardening material would take up three large parcels of land. Nickelsville had at least two storage areas at the camp on the west parcels, where the camp was. That storage was under a canopy near the entrance to camp and at the north edge of parcel 0609000030. Here’s what that storage area looked like: 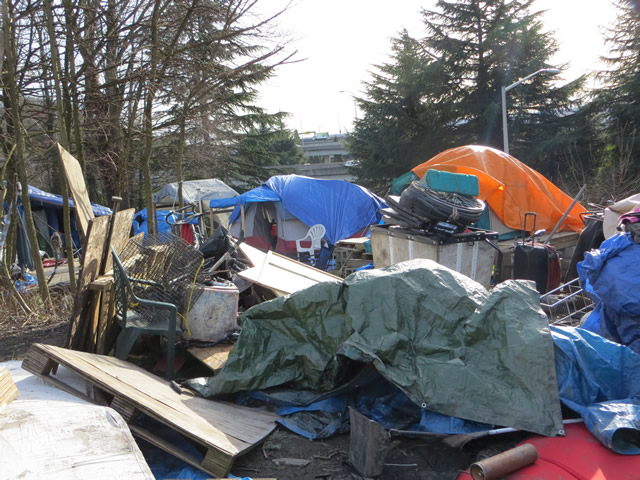 Here’s a graphical view of how the tax-exempt parcels were used: 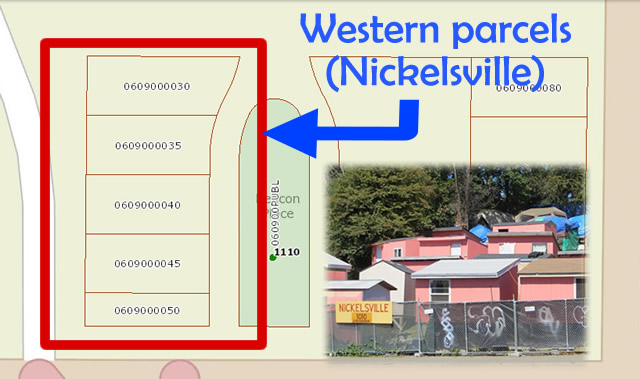 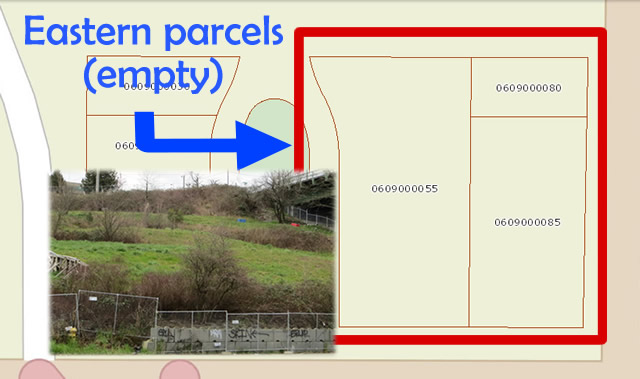 How much money was at stake here?

–The landowner saved a total of $87,000 in property tax on all eight parcels for two years. Of this, the biggest share, $50,000, was from those three unused parcels. See a breakdown of the tax savings by parcel here. That $50k might not seem like much in terms of what King County spends on homelessness – it’s less than a tenth of what the County gave SHARE in free bus tickets alone – but in terms of changing homeless people’s lives, $50k is a lot. And in terms of fraud – if indeed that’s what we’re talking about here – $50k would enough to call for a severe penalty on someone. But fraud is not an easy charge to prove. It would require establishing that someone had a criminal intent to deceive, and that would require a smart district attorney, backed up by a brave county prosecutor’s office and county executive. Such an alignment seems especially unlikely, given the act-tough-but-look-the-other-way attitude King County has taken toward SHARE over the past 20 years.

But no matter. In the coming weeks, I’ll be going back to the application documents and talking to the principals to see just what they promised to do at Nickelsville . . . and comparing that with what they actually did do. If public officials choose to do their own investigation into this, that would be excellent. If not, they can keep following along with mine.

–Story and photos by David Preston

SHARE (the Seattle Housing and Resource Effort) has been in the news again lately. King County has failed to renew some of their funding in light of various scandals and non-performance. Meanwhile SHARE has fought back by closing its indoor shelters and getting homeless people out in the street for protests. See a Seattle Times story here.

SHARE has always weathered these storms in the past. Often, they will emerge stronger than ever, opening even more homeless camps and landing still larger government contracts in the wake of a confrontation with government. If you follow SHARE for a few years, you’ll notice a pattern: SHARE will be the subject of a scandal, or will have a funding crisis. There will be a noisy confrontation, complete with daily and nightly news stories. After a few weeks, the furor will die down. Next thing you know, SHARE’s opening a new camp or celebrating a new government contract.

Why should this be? If SHARE is really as corrupt and/or ineffective as the news stories imply, why is it so hard for the authorities to shut them down?

I dunno . . . Why did it take so long to put Capone behind bars?

Whenever someone accuses SHARE of some foul deed, like selling drugs, say, or pawning donations, the charge sticks like ice cubes on Teflon. Unfortunately, SHARE’s victims don’t make good star witnesses. These are homeless people after all; many of them have lifelong problems with addiction or mental health. When you speak with them about their bad experiences, they often seem confused, isolated, or afraid. They are apt to change their story at the last minute, or change their mind about testifying all together. Even when an accuser is rock solid, which occasionally happens, SHARE can always muster enough of its own people and friends in the media to discredit the accuser. One case I studied involved a brave young woman who took her complaint all the way to the Seattle Office for Civil Rights. This women alleged that SHARE had evicted her from its shelter network for refusing to attend one of SHARE’s mandatory political demonstrations. When the woman produced a “bar slip” signed by SHARE’s management team, SHARE produced several witnesses who claimed that, while they had barred her from a tent camp outside Seattle, she hadn’t been barred from SHARE’s Seattle shelters and that therefore the document must have been forged. The hearing officer went with SHARE’s version, and the case was then dismissed on jurisdictional grounds. This woman made it further than any of SHARE’s other accusers. Most claims against SHARE never make it past a brief segment on the 6 o’clock news or a back-page slot in the Times, where, in keeping with the best journalistic traditions of fairness and objectivity, SHARE’s spin doctors are given a chance to do their thing. We never saw any of this stuff happening, camp bosses will say. The accuser is a malcontent. A behavior problem. She’s just angry because she got kicked out of camp . . .

A few complaints make it as far as the desk of city officials like Seattle Councilmember Lisa Herbold, where they are quietly “managed.”

And so it goes.

It’s a different matter when it comes to SHARE’s dealings with government, however, as we see in this tax exemption affair. In cases like these, corroborating witnesses are not required, because it’s all right there on paper: What SHARE got paid by the government and what services it was supposed to provide in return. The only thing that’s left to find out is what services SHARE actually did provide. Did they have a homeless camp on this piece of land? Or not? Did they provide people with transitional services? Or not?

10 Responses to The Case of the Missing Homeless Camp