Lisa Herbold is the presumptive new Seattle councilmember for my district. Her campaign platform is that she works for the little people (just like Kshama Sawant) and that she’s not for sale to corporations. She might not be for sale, but that doesn’t mean she’s not for rent. 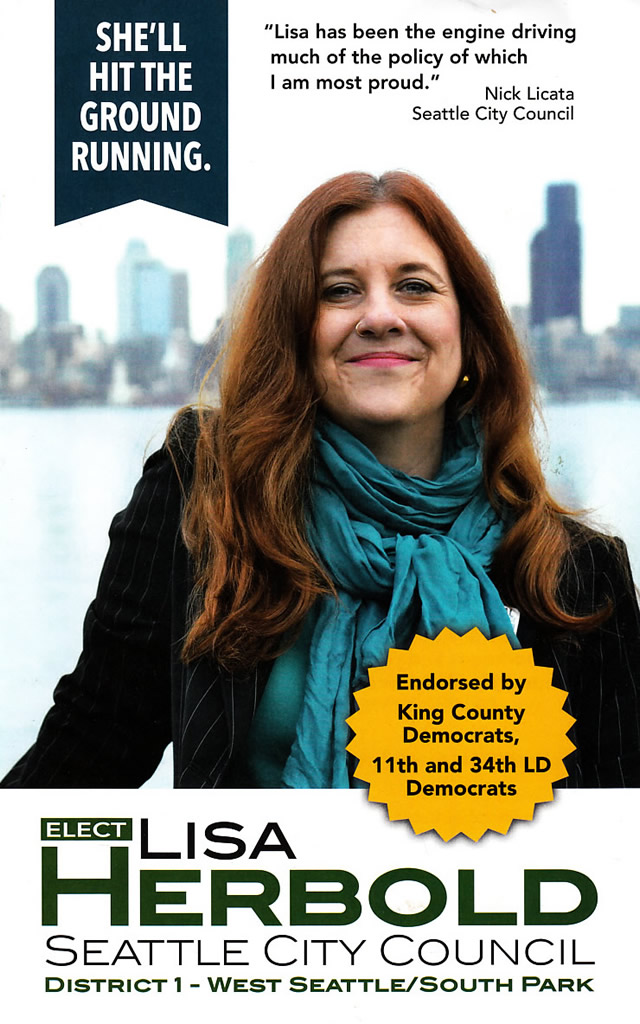 Two years ago I had some interaction with Ms. Herbold. The manager of a large and problematic homeless camp in my neighborhood was refusing to meet with the city about finding a new place to stay. The camp had been in the same place nearly two years and everyone agreed that it was time for them to move on, but the camp manager insisted he wasn’t budging until the City found him a place at least as good as the one he was at. Many people in the neighborhood were getting tired of all this, however. The camp was on public land (illegally) and the City had many tools at its disposal to resolve the situation, but there was a political stalemate caused by political cowardice and a lack of imagination.

I e-mailed and called Ms. Herbold and her boss Councilmember Nick Licata repeatedly over several weeks, but they didn’t respond . . . until I threatened to embarrass them publicly. When I finally got a call from Mr. Licata, he told me that he couldn’t do anything to force the homeless camp owner into talks, but he did agree that the City would participate if I could set something up informally with the other stakeholders, which included the homeless camp manager and a local neighborhood group. Fair enough. I got the neighborhood group to buy off on having a meeting. But then camp manager refused to participate, so nothing came of it. (It took the city another year to evict this guy from the property, and when he finally went, he left a huge mess to be cleaned up at taxpayer expense.)

Some months later, after I first contacted Ms. Herbold, I heard through the grapevine that she had had a previous “relationship” with the manager of the homeless camp, a guy named Scott Morrow. So I e-mailed and asked her: Did you know this guy from the time before you worked for the City Council? First she said, No. So I got right back to her and said: Think hard. Because I’ve heard that you used to work with him.

So then Ms. Herbold came back and said (paraphrasing), “Yes, well, looking back I remember that I did work on some projects with Scott when we were at the Tenants Union together.”

I believe that Ms. Herbold did not apply any pressure to Mr. Morrow to get him to do the right thing. And she never will, because she considers him a friend, and you just don’t side with strangers against your pal. I have seen pictures of Herbold at fundraisers for Morrow’s non-profit organizations, pictures that should be very troubling, consider Morrow’s dependence upon taxpayer money. Morrow’s non-profit groups – that is, the ones he controls directly – get hundreds of thousands of dollars in city funding every year. And the ones he controls indirectly, through intermediaries, get far, far more. I don’t know exactly what the relationship is between Herbold and this money, but you can bet there is one. You just to have to do a little research and connect the dots. 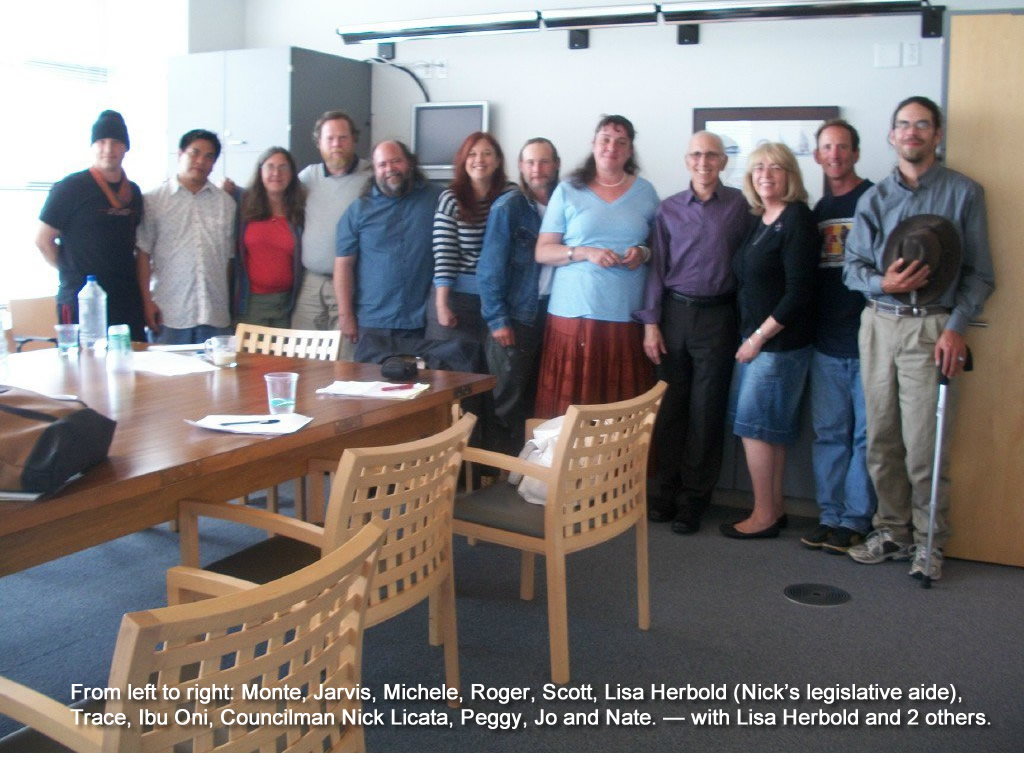 Scott Morrow and Lisa Herbold during a recent meeting at City Hall. Also in attendance are Councilmember Nick Licata and several of Mr. Morrow’s employees at SHARE. [Click photo to enlarge.]

In recent months, Ms. Herbold and her boss Nick Licata have been instrumental in pushing forward legislation that has allowed Herbold’s old pal Morrow to set up his homeless camps on City-owned land, with the promise of still more funding to follow. Unfortunately, Morrow is not very forthcoming about how he runs these camps, but we do know from the public record that if you’re a resident at one of these places, and you go against Morrow, you can be evicted immediately without recourse – which is a violation of fair housing law. I wrote on these pages about an incident last winter where Mr. Morrow threatened to evict everyone from one of his “democratic, self-managed” camps if they didn’t agree to let him call the shots. At that time, he told the rebellious campers that they owed him some 10 grand for expenses he’d incurred (for port-a-pots, garbage pick-up, etc.), and that if they didn’t pay up, they’d all have to leave within a few days. When I asked Mr. Morrow to give me an accounting of the money he’d actually spent on these services, he didn’t respond. When I contacted the City’s Housing and Human Services Department to ask them to investigate the matter and make some changes in their policy regarding the camps. They did not agree to do either.

Ms. Herbold is aware of all these goings on with Mr. Morrow and his camps. I cc’d her on several of e-mails to Human Services and have sent her links to numerous stories that I’ve posted on my personal blog. But of course I never hear back from her, and nothing ever changes. If anything, matters are now likely to get worse. After being elected to Nick Licata’s old job, Ms. Herbold will have even more power to help Mr. Morrow. And there’s no reason to think she won’t.