This post is dedicated to an avid TBQ’er who likes to text me with photos of ex-Nickelsvillains he sees roaming the highways and byways of Highland Park, weeks after Nickelsville itself has moved on. I’m naming the project “ppl” after the texting/twitter abbreviation for “people.”

Now let me honest about something here. I’m not trying to make you think this is all Nickelsville’s fault. Some of this shit was here before they moved in. But it has gotten worse – much worse – since they were here. And even locals who once supported the camp (like I did) can’t help but notice the difference. 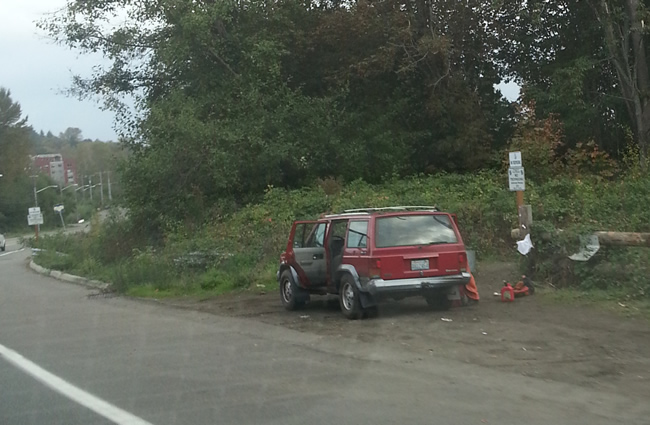 At first flush, this person appears to be merely dumping shit. But in fact they are more likely getting ready to have a cook-out.  If you know what I mean by “cook-out.”

The SHAG senior apartment housing complex known as “Arrowhead Gardens” can be seen just up the road on the left. If you think of it, why don’t you send them an e-mail with a link to this story? Here’s the link for SHAG e-mail.

SHAG has a lot of weight with the cops and the City. Trust me: If they want the meth labs and prostitutes outta there, they’ll be gone.

Oh. And thanks again, Mayor McGinn. For tossing my neighborhood in the Trash Bin. 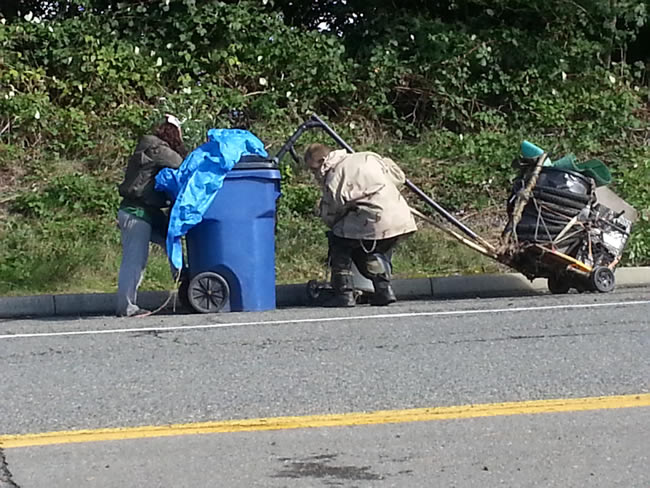 TBQ sez: Is that our friend Deano-Beano? Kinda looks like, but it’s hard to tell, because he’s hiding from the  camera.

Whoever the guy is, he’s definitely a hoarder. I have a picture of those bicycle tires that was taken in camp during the move-out. Looks like the guy probably just stripped the tires off the wheels and then stretched ’em around his stuff. Could be different tires, I suppose . . . 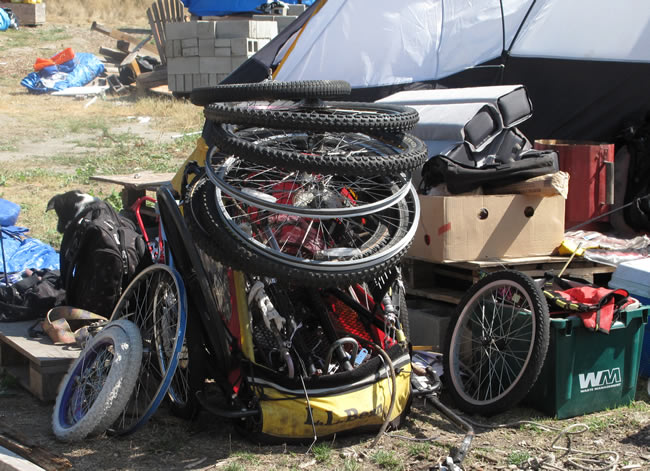 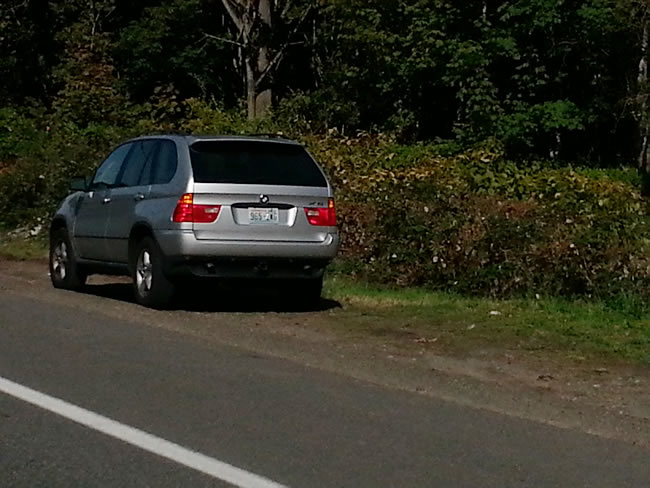 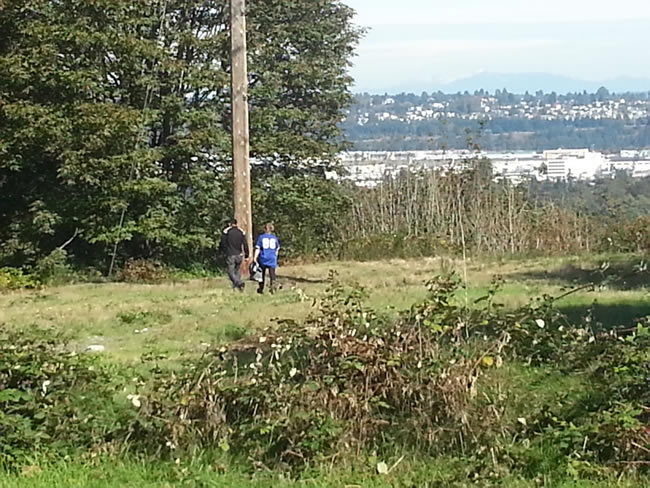 According to my correspondent, this car pulled up along Myers Way and these two charming “ppl” got out and hustled to the cover of the greenbelt, intent upon some foul play. Or fore play. Or something like that.

I said: Let’s not jump to conclusions, now. Mightn’t this be someone dropping off donations to the ex-Nickelsvillains living down there? As you know, there’s some well-heeled folks in West Seattle who like to help out now and then.

Correspondent said (rather quaintly I thought): They’re either buying meth or fucking. Not donating. LOL.

(Which might not be technically correct on the fucking part, because as TBQ sees it, if two people are fucking to make themselves happy, that’s like a donation, isn’t it? [An “in-kindness” donation.] But perhaps I’m putting too fine a point on it, because when my correspondent said “fucking” I’m sure he meant like, fucking for pay. LOL.)

Correspondent said: She looked like [white] trash. He was Asian. I mean . . . if she is a hooker, whatever. But, God! In the woods?!

TBQ notes that the license plate number of the Beemer starts with “965” and ends with something like “ZNG” or maybe “ZWG.” Washington plates. See? 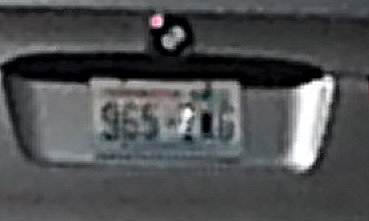 Sure hope I’m not spoiling the romantic mood here, because it’s still possible that these are just two people who happen to be very much in love with each other and want some privacy. Like a modern day Romeo and Juliet or something. Only with meth. 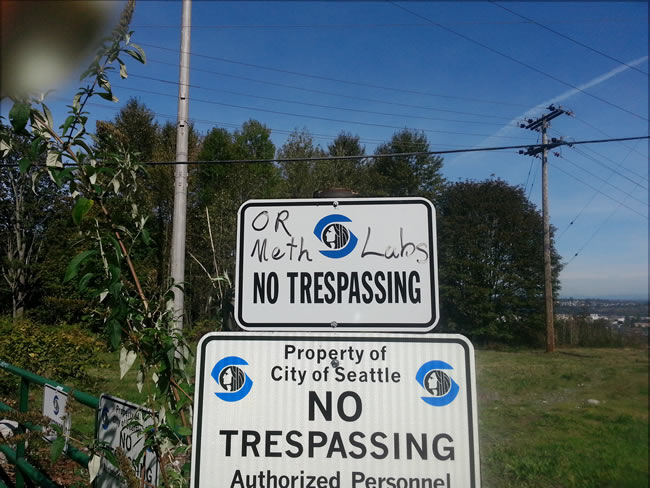 On a more serious note, I hope all of you TBQ readers in the Highland Park / White Center area will send a link to this story to the local constabulary and ask them: What are you doing about this nuisance in our community? –because my correspondent and other neighbors have been bugging them about it for some time now, with very little to show for their time.

If you don’t get a satisfactory answer from the cops, go right to the Mayor’s office and say: “The cops won’t help me. What are you doing about this, Mr. Mayor? You’re the one who invited Nickelsville to stay in this community, so in some sense, you’re responsible. Sure, we had crime in this area before Nickelsville blew in. But crime went WAY UP after they got here. And now that they’re gone, it’s STILL here.”

Here! You can e-mail them right now:

Jerry is a senior policy advisor for Mayor McGinn.

You can also try:

Darryl is Deputy Dawg Mayor, and I’ve had some success with him, too.

Or whuthafuck? Just go straight to the Mayor:

If these people get enough fan mail, they’ll do something. But if they don’t get enough fan mail, they won’t. And that’s just cuz that’s how politics works. Someone could be pitchforking babies onto a bonfire, but unless the Mayor’s office starts getting complaints about it, these pols will be like: “OK. Hm. Baby bonfires, huh? Must be a hip new thing. Maybe I should come out in favor.”

Here’s a related essay on what’s been happening in this part of the world since Nickelsville moved in. Click here.

The area in question is this spot right here: 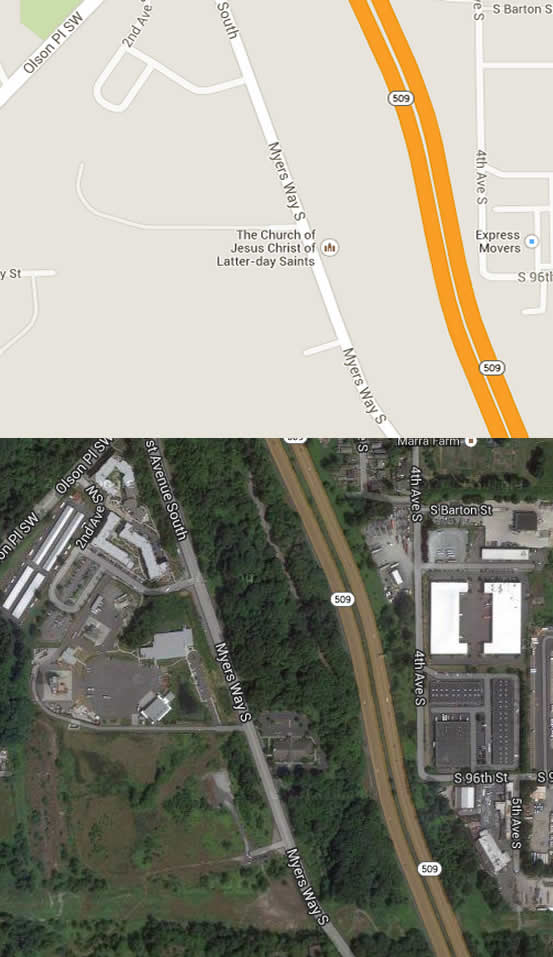 Or Google Map it here. It’s tricky when people try to report drug activity here, because there are few street addresses to go by, and I don’t think 9-1-1 can work with GPS coordinates instead of addresses. But if you just said “the greenbelt between Myers Way S and and Hwy 509, just south of the Mormon church” -it would be good enough. The City should know just where this is. Hell, they’re the ones who put up the “No trespassing” signs . . . for all the good that did.

Now you’ve probably noticed that I’m pointedly avoiding blaming the cops for all this.

Yeah. I got problems with cops not doing more, but I want to be careful what I say about that, because I don’t want you to come away with the wrong impression. The Nickelsville crime wave in Highland Park was NOT the cops’ fault. Got it? Not! They were down there plenty. But they were told, more than once, to take a “hands-off” approach, because the Mayor and SHARE had already worked out a deal where Nickelsville had the Mayor’s blessing until further notice. And this was because Mayor McGinn, pussy that he is, was scared shitless of Scott Morrow and SHARE. McGinn didn’t want what happened to his predecessor Greg Nickels – “Nickelsville” . . .  get it? – to happen to him as well. So he told the cops to back off. And I know this for a fact.

But just for irony, I’m going to finish with an excerpt from a speech Peggy Hotes made last month to the West Hill Community Association in Skyway. One of Nickelsville’s new squats. In this segment Ms. Hotes, who runs Nickelsville along with boyfriend Scott Morrow, is blaming the cops for Nickelsville’s crime problem.

Ya got that, folks? According to Hotes, it’s not Nickelsville that’s responsible for all the crimes that those people do. It’s the cops’ fault! (And guess why: It’s because they hate poor people.)

No really. Listen for yourself:

Peggy Hotes: Crime at Nickelsville HP is the cops’ fault

Think about this. For two years this woman – a teacher at the Lake Washington School District, a woman who lives in a nice Bellevue neighborhood, in a $500,000 house – ran an illegal squatters camp in my neighborhood. And into this squatter’s camp she and her grubby, trustifarian boyfriend invited all kinds of drug dealers, felons, and low-lifes. And then, when someone asks her about the resulting crime wave, she had the GALL to blame . . . of all people . . . the cops!

Now remember, this is the same Peggy Hotes who invites children into her camps, as we can see in this detail from a flyer she created and posted on her Facebook page: 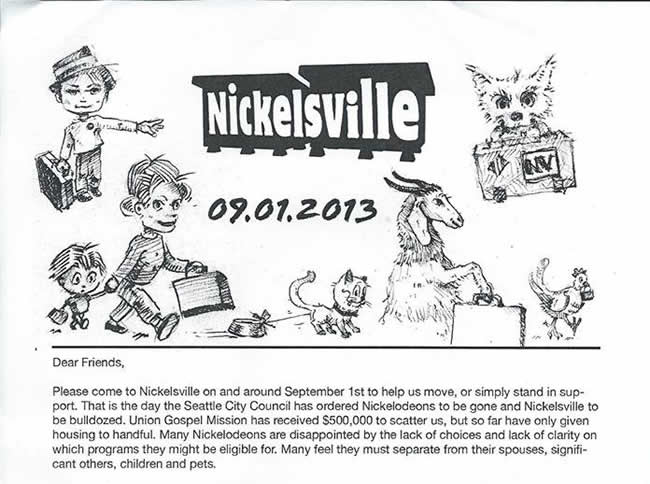 Just like her deadbeat boyfriend, Peggy Hotes is always blaming other people for her mistakes. How much you wanna bet that when a kid is killed or molested at Nickelsville, she blames someone else for that too?

Oh yeah. It’s gonna happen all right. I guarantee it. A kid’s gonna get hurt at Nickelsville – I mean really hurt – and Peggy’s gonna say it was someone else’s fault. In fact, it already has happened. And she already did say that.