The Good, the Bad, and the Shmorrow

Last month I paid a social call at Nickelsville’s new Skyway digs. While there I was surprised to find one of my old buddies, Yordan. (Pronounced: Yor-DAN).

Yordan’s from Bulgaria, and he’s an intelligent, hard-working man. 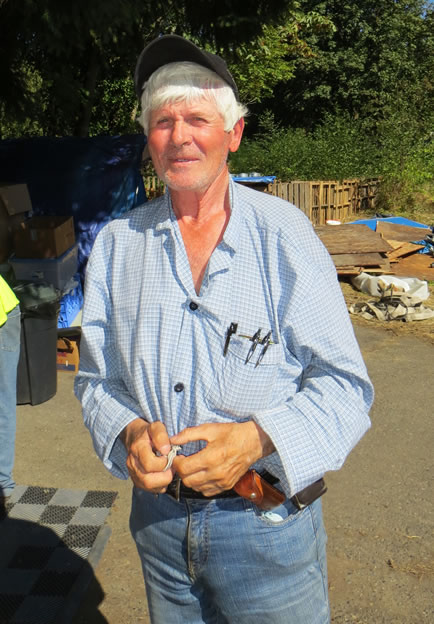 Yordan is one of those folks whom Nickelsville actually helps – at least, up to a point. Let me tell you what I know about him, and how our stories converge.

I first met Yordan some three years ago, when I was doing peace vigils with my group (West Seattle Neighbors for Peace) in the West Seattle Junction. We’d stand out there for an hour every Saturday with our “End the War” placards, trying to solicit friendly waves from passersby.

One day Yordan came up and volunteered to hold a sign. He hit it off with folks right away because he’s so friendly and because he believes so strongly in people exercising their sacred right of free speech. See, he grew up in a place where criticizing the government came at a very high cost. So now that he’s here, where they’re giving it away on street corners, he thought he’d get him some of that.

Dammit! Kinda makes you wish that every American grew up in Bulgaria, doesn’t it?

Anyway, Yordan would drop by about every other Saturday, stand with us for an hour, and chat. During these chats, I learned many interesting things. Things about Yordan. Things about Bulgaria. Things about America.

One of the things I learned about Yordan was that sometime after getting his citizenship here, he’d fallen on hard times. He’d lost his job as a carpet-layer when the 2008 recession hit, and he’d been living in a succession of crummier and crummier places. He ended in a squat near Lowman Beach, with the tenuous permission of the landlord. He was getting by (barely) with some friends from a local church. During this time, he was probably hungry. A lot.

I also learned from Yordan that, in addition to his difficulties just keeping his head above the sand, he was being ripped off by some heartless asshole who told him he’d won the lottery but that he’d have to pony up to claim his prize. When I explained to Yordan that this was a scam and that someone was robbing him, he assured me that, no, he was too smart to be tricked like that. Rather, he was about to become a millionaire, he assured me, and would soon be back on his feet and in his own home; he was merely waiting for the fellow he’d been talking with to hand the lottery ticket over to him.

He was also expecting a visit from his brother back home, he told me. A brother whose arrival in Seattle was expected “any day now.” Or sometime this summer. Definitely.

I believe that the visit from Yordan’s brother was probably a fantasy, just like the winning lottery ticket deal. Or perhaps the brother himself was a fantasy, woven from the same hopeful cloth as both the brotherly visit and winning ticket. Perhaps the brother did turn up in the end, but things didn’t go well. (You know how brothers from Bulgaria can be, right?)

As I saw Yordan’s actual fortunes fare inversely to his imagined ones, it occurred to me that things were probably not going to end well for him. And indeed, they didn’t . . . though I’m sure it could’ve been worse.

When I hailed Yordan at Nickelsville-Skway, he didn’t remember me for a while, and after talking to him for a few minutes, I realized that he was probably already slipping into the early stages of dementia. He explained that he’d finally been kicked out of his squat (the landlord needed it for something, no doubt) and that some nice church people had helped him find his way to Nickelsville, where he was being treated well. –And indeed, from what I could see, he WAS being treated well.

Yordan does not seem like the type who could hack it on the mean streets of Seattle for too long, and the fact that he should find himself homeless in Paradise constitutes the essential irony, not only of his life, but of our life as nation. For how can it be that life for a good honest man like him should be harder in a free nation than it was under a communist dictatorship?

So God Bless Nickelsville for helping Yordan, I guess. Yeah, God Bless Them for saving the life of this good man. Or for saving the life of any man, good or bad. But I have to wonder: What’s next for Yordan? To put it plainly, the man needs psychiatric care. Will the people in charge at Nickelsville – who could use a little help themselves – prevail upon this guy to see a shrink? And if so, will they see that he gets to his appointments? Make sure he takes his meds? Help him with a plan to get into permanent housing?

Or will they let him sit there and rot, until illness claims the body as well as the mind?

Walk through these camps, as I have. You’ll see it everywhere: psychosis, paranoia, bipolar disorder, depression. And everywhere: drug addiction. Most of these cases are amenable to treatment. Yordan is. Heather is. Diane is. These people will NOT get the help they need, though. Not as long as they’re living at Nickelsville. –Why? Because that’s not part of Scott Morrow’s vision.

According to Scott, the way these people are living now is the way they want to be living: as totally free and self-actualized individuals, coexisting in democratic harmony with others like themselves. These folks just want to be free from other people interfering in their lives. They can get well and manage on their own – thank you very much – if all the busybodies and bureaucrats will just leave them alone.

Yeah. You just keep telling yourself that, Scott . . .

Ending up on a hopeful . . . you still get a karma point for getting Yordan off the street. I’ll give ya that. Just like you got one for saving Mike and Tracy, and Mike S., and Heather, and so on.

But you’ve been throwing those precious points away, buddy. Right when you needed them most.

1 Response to The Good, the Bad, and the Shmorrow