February 4, 2018 ~ I have a friend, “Joe,” whose mind zips along at a hundred miles an hour. He’s always analyzing city politics and connecting the dots. On a typical day, he’ll send me a dozen e-mails with various insights and links to news stories he thinks I’ll like.

Today Joe sent me this diagram he made explaining how the Homeless Industrial Complex thrives off the homelessness that is manufactured, in a sense, by its own actions. I like this diagram very much, and I have dubbed it The Swindle Cycle™ in accordance with my theory that Seattle’s homeless “crisis” is in fact nothing more than that: one giant swindle.

Of course Joe’s diagram is an oversimplification; there are many other factors that affect the cycle – things like corrupt politicians, pressure groups, lazy news media, a distracted citizenry – but this diagram captures the process in its essentials. 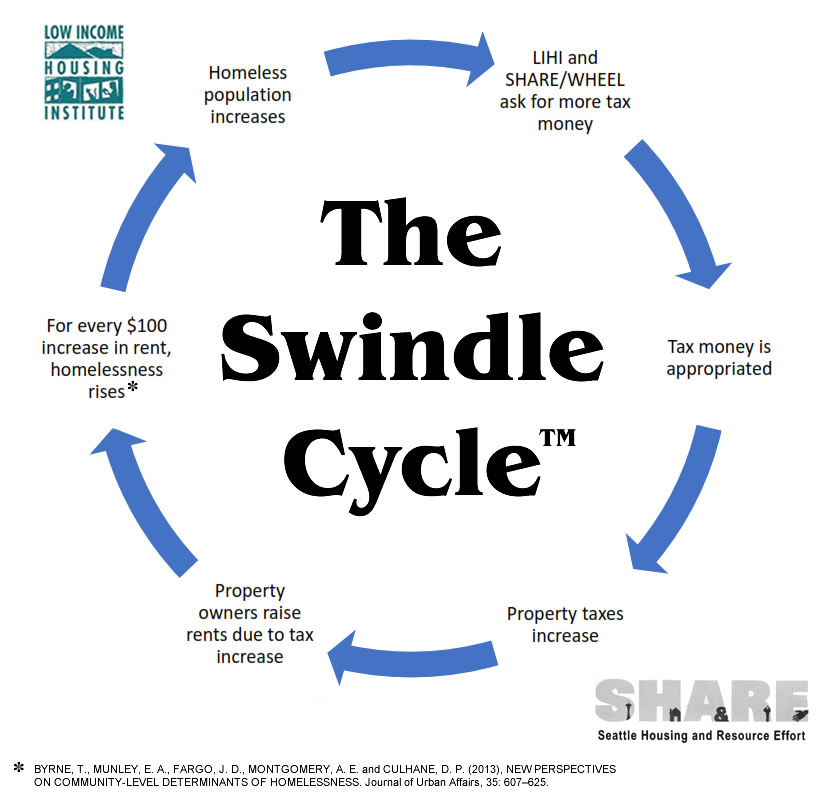 One caveat I’d add is bear in mind that the Seattle-ites who get priced out of their homes due to tax increases and rent hikes* (center left position on the cycle) are not the same people we see living on the streets. In fact, they are not a significant part of the homeless population at all. A person doesn’t go from living in a pricey studio on Capitol Hill one month to being sprawled out under the viaduct with a needle in his arm the next, just because of a rent hike. But that doesn’t change the equation, because, as with any con game, it’s illusion that drives it and not reality. Yes, people ARE being priced out of Seattle; that’s a given. And yes we ARE seeing more homeless people on the streets than ever. The Homeless Industrial Complex wants us to conflate those two groups, and in the absence of any data proving that they are not the same – and there IS no such data, thanks to the efforts of Homeless, Inc. – people will assume that they ARE the same. Once that illusion has been implanted, Homeless, Inc. and their allies on the City Council can go to the good people of Seattle and say: “You’re doing so well here… but look, others are suffering! It’s your fault these people are on the street, so it’s your moral obligation to give us some of your money, so we can help them.” –Thus begins another round of tax hikes, rent increases, and price outs, and a new, even larger wave of vagrants hits the streets.

And so the swindle continues…

Also see my article “Anatomy of a Swindle” for more background on this.

7 Responses to The Swindle Cycle