No Excuses: How Seattle’s activist judges endanger our citizens

May 13, 2018 ~ In a landmark court case last March, King County superior court judge Catherine Shaffer cited an obscure provision of Washington’s Homestead Act to rule that cities can’t impound vehicles or “excessively fine” their owners when those owners are living on board. If upheld, that ruling will block police from confronting the growing number of criminals running drug operations and doing other sleazy stuff out of their RVs. Packs of RVs have already turned several areas of downtown into “no go” zones, and one of the places impacted, ironically enough, is the King County Courthouse, where Judge Shaffer holds court. Last summer, the Courthouse made headlines when several jurors were assaulted and King County Sheriff John Urquhart was attacked by a psychotic man with a pair of scissors.

After reading the story about Judge Shaffer, one of my readers on the Safe Seattle Facebook page told me she’d been assigned jury duty downtown last fall and had asked to be reassigned to the suburban Kent Regional Justice Center instead because she feared for her safety. Shaffer turned the woman down, telling her that if she felt unsafe, she could use the back entrance to the building. This graphic shows her letter asking to be excused and Judge Shaffer’s response: 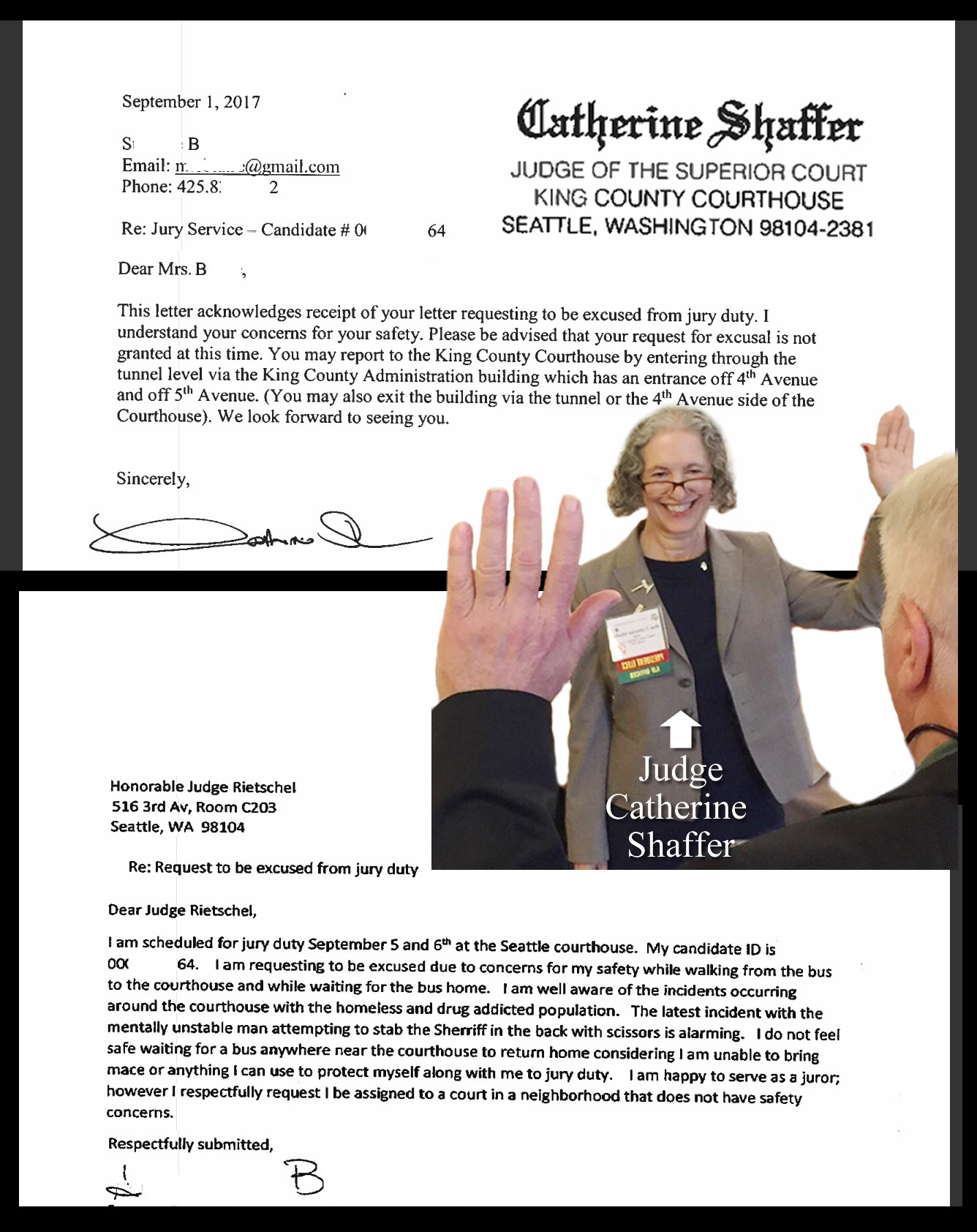 Below is some commentary the unexcused juror sent to me, describing the incident:

In my request to be excused, I cited the attack on Sheriff Urquhart that happened a few days prior. The Sheriff was able to defend himself because he has a weapon. I am unable to bring a weapon to court and did not feel safe standing on the street waiting for the bus at the end of the day or walking from the bus to the courthouse. I didn’t ask to be excused all together; I just asked to be assigned to the courthouse in Kent, so I could drive there. Judge Shaffer didn’t address my concern and instead told me to go in the County Administration Building on Fourth Avenue and then walk through the underground tunnel to the Court. That was not helpful to me.

I had to take a bus to downtown Seattle in the middle of winter when it’s dark for much of the day. Luckily, the bus let me off on the safe side of the street, and it was in the 20s that morning, so the street dwellers were tucked away keeping warm. In the end it was a total waste of my time. They had more people then they needed, and 60 of us were sent home after watching the video. Luckily I was one of the them, but still, it was such a waste. There was $600 plus mileage spent just on the first group they sent home. There were close to 200 of us waiting and most were sent home by lunch.

It would appear that Judge Shaffer cares more about the rights of criminals living in RVs than she cares about the safety of the good citizens she compels to appear for jury duty. In this case, there was no reason for Shaffer to compel the juror to come downtown, since the Court had overbooked by about 60 people anyway. Shaffer’s actions make no sense, unless you see them in the context of “progressive” Seattle, where those who obey the law are vilified while those who disobey it are exalted.

2 Responses to No Excuses: How Seattle’s activist judges endanger our citizens