The right to recall an elected official is a constitutional right of the people set forth in our constitution. The procedure is governed by statute. A “typewritten charge” needs to be submitted and it has to allege malfeasance, misfeasance or violation of the oath of office.* That charge has to be specific as to date, location and nature of the act or acts complained of. The charge has to be submitted by a person in the position to know and signed under oath. The prosecutor then writes a ballot synopsis. Then there is a hearing in superior court. The hearing can involve lawyers and testimony. 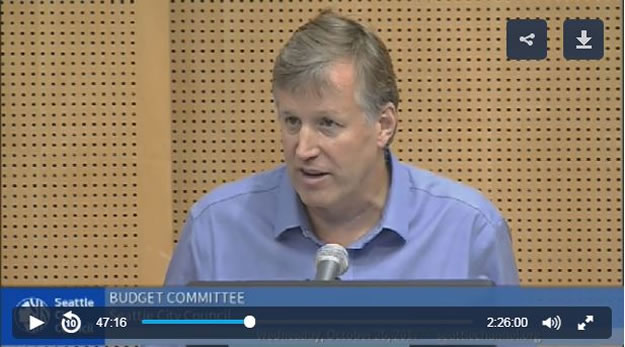 The court decides whether the factual allegations are sufficient (the court’s role is not to decide whether they are truthful) to move forward and also whether to make changes to the ballot synopsis. The official to be recalled can appeal a sufficiency finding to the supreme court. A sufficient charge can move forward with a petition and there are timelines for gathering signatures, timeline for the above-mentioned hearing, signature requirements (35% of total number of votes cast for the position), form requirements, an opportunity for response, a recall election – majority rules. If the recall is successful, the seat is vacant. What happens next? I believe the City Council can then fill the position until the next election but I would need to read more.

The standard for proving the legal and factual sufficiency of a petition in the superior court is high and there is a well-developed body of cases rejecting petitions based on, essentially, policy or judgment disagreements, among other similar things. There was a recall effort against Kshama Sawant’s predecessor Richard Conlin, but the Recall Conlin petition did not clear this high bar.

*
(1) “Misfeasance” or “malfeasance” in office means any wrongful conduct that affects, interrupts, or interferes with the performance of official duty;

(a) Additionally, “misfeasance” in office means the performance of a duty in an improper manner; and

(b) Additionally, “malfeasance” in office means the commission of an unlawful act;

(2) “Violation of the oath of office” means the neglect or knowing failure by an elective public officer to perform faithfully a duty imposed by law.