The document in the link below was produced by Seattle’s Customer Service Bureau (CSB) in response to a public disclosure request from Safe Seattle. The document shows how many citizen complaints the City got in a six-week time period. The report is a whopping 37 pages long with hundreds of individual complaints. And remember: that’s for just six weeks. And this list does not even reflect all the encampments that were in existence around the city at that time; just the ones that one or more complaints came in on. 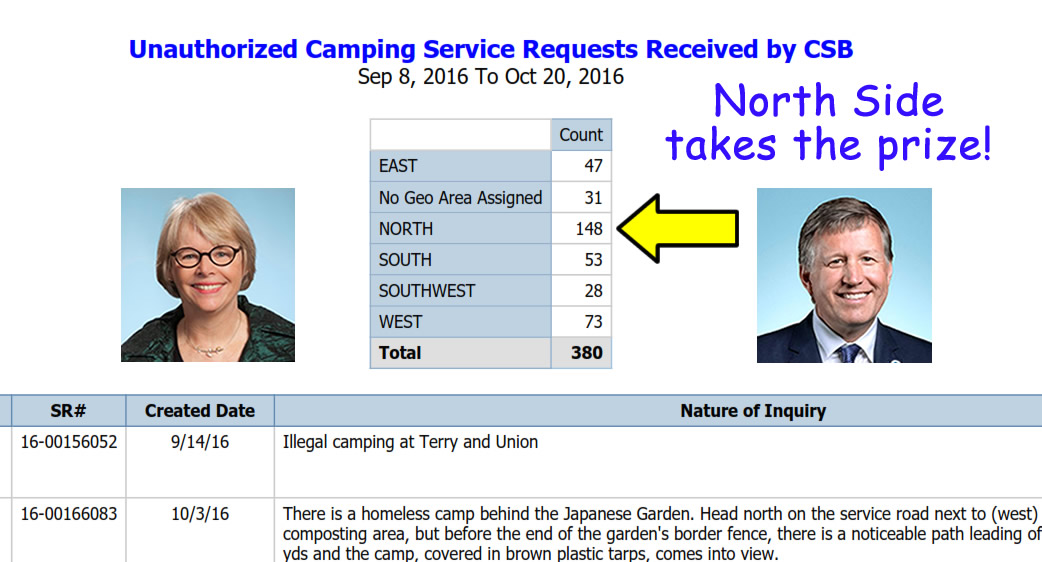 So, what can we learn from this report? A couple of things jump out. First, we can deduce that the number of complaints reflects the actual situation on the ground — relatively speaking. In other words, there is a correlation between geographical regions and relative numbers of encampments in those regions.

It is clear from a quick scan of the data that the north side of town is bearing the brunt. At 148 complaints, the North has more than twice the number of complaints than the next highest region.

So why should this be? Is it because there are twice as much greenbelt and park acreage on the north side? –Doubtful.

Is it because the population density is twice as high on the north side? – Again, not likely. Yes, the north end is denser than some other parts, but not THAT much denser.

If you’d like to report an illegal encampment or similar issue to the City, you can do that through the Customer Service Bureau, here.

Postscript: It would be interesting to do some longitudinal GIS mapping to see how the illegal encampment clusters in other neighborhoods have developed in relation to the Ballard and Interbay encampments is. I’d also be curious to compare this period to the same time last year, and the year before that, and so on.