In my time, I’ve been in some pretty bad places. Figuratively and literally. I was raised in an affluent home, but as a young man, I traveled to an embattled Third World country because I wanted to see how the other half lived. I was stranded there for a time, and I became so immersed in the poverty – and so shocked by it – that I went into a profound depression, which worsened when I came home to the “shock” of affluence. I later became impoverished myself, living for years in a series of filthy, vermin-infested flophouses in the poorest quarters of town. Even after I came to Seattle, I lived for several more years in the “projects” on the south side, before finally pulling myself out of my funk and moving on to better things.

In the course of my years among the down and out I became a student of misery, sensitive to its many moods and incarnations. I’ve heard Seattle tent camps compared to the slums of Bangalore, and I can tell you that that statement is, in the main, false. But not in the way you might think. In some ways, the Bangaloreans have it better than our homeless. They’ve not fallen as far for one thing, most of them. And they have a sense of community that comes from a universally shared misery. People can maintain social norms there, even amid the despair, simply because there is no better option them. And they know it. 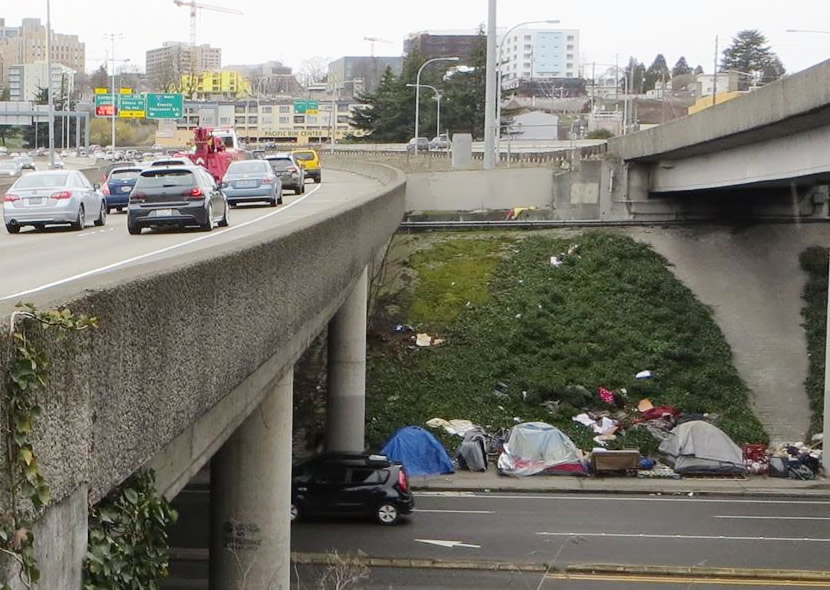 I’ve seen people in our camps trying to recreate that community, telling themselves they’ve got it. It never lasts. These squalid tent camps and corner lots crammed with prettified shacks they call “tiny houses” will never be the stable, self-managing villages that the poverty pimps say they are. The briefest visit will disabuse the outsider of that idea. Drifters and malcontents, damaged souls with a history of anti-social behavior . . . These poor souls can be corralled for a while, kept in line under the whip of a single dominating personality (the camp boss). But left to their own devices they will never do any better than they could under the regime of brute force. And they will usually do worse. Which makes the “sanctioned” camps actually look good in comparison to the unsanctioned ones. Thus, when homelessness and homeless camps are presented to us as an inevitability, and these two options (sanctioned or unsanctioned) are offered to us as the **only** choice, the sanctioned ones suddenly don’t seem so awful any more. And as for the unsanctioned ones, even THEY are better than the street, aren’t they? To my mind there’s little difference, since none of the three options gets people any closer living in a real home. And none is very far above the level of a brute struggle for survival. It’s just a question of whether you spend most of your time fighting the local camp boss . . . or fighting the streets.

I was chatting candidly with the head man of an unsanctioned encampment the other day. This fellow had been there for a year or more, and he was telling me of his aspirations to get sponsored by a willing non-profit and blessed by the city leaders. He was duly frustrated that his efforts weren’t bearing fruit. City officials weren’t leveling with him, he said, but I could see in a trice what the problem was. “We had a lot of stealers in this camp a few months back,” he explained. “But we dealt with ’em, and now we’re good.”

“How did you deal with them?” I replied.

He leaned over and gave me a knowing grin.

This entry was posted in General, Stories and tagged affluence, authoritarianism, democracy, poverty, the jungle. Bookmark the permalink.

2 Responses to The Thin Veneer