The True Cost of Eco-Babble 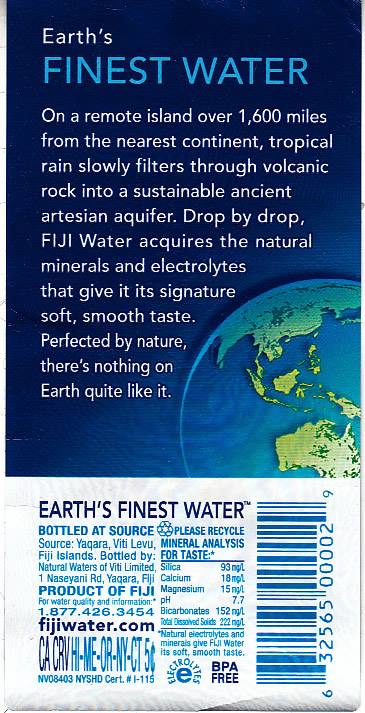 Someone chucked an empty FIJI water bottle in my yard this morning. Before recycling it, I took a minute to read the label. The packaging is clearly targeted at the “green” demographic. Can you see how? The wording wraps around an image of Planet Earth, tinted in blue and green. The word “earth” is used three times in the blurb and the word “nature/natural” twice. But the money word is “sustainable” (as in sustainable aquifer).

In fact, there is nothing sustainable about drinking water from a throw-away plastic bottle – especially when that water has been shipped half-way across the world. According to the article linked below, it takes a seven gallons of water and quarter of a gallon of fuel to produce and ship a bottle of FIJI water to the U.S. How is that sustainable? It’s not, obviously. But no matter. As long as they’ve got a picture of the planet in there along with the right wording, we’re good, right?

It’s especially silly when someone in Seattle drinks bottled water, thinking it’s got to be better, because this town has some of the highest-quality drinking water in the world. –You want mineral water? You want electrolytes? Put a pinch of baking soda in there. You want the volcanic aquifer effect? Toss a pinch of pulverized sand in there, too. That’s what the “silica” on the FIJI label is.

Seattle: Do you really want to do something good for the planet? First give up the bottled water. Then drop the hypocrisy.

Fiji is no bed of roses. This article from Water Liberty News discusses political and hygienic conditions there.

Fiji Water, the corporation, has a 99-year lease, and almost exclusive access, to an enormous, more than 17-mile-long, aquifer on the main island. The country’s corrupt and broke government was unable to obtain the infrastructure to tap into it before that, and its people struggle with continuous water problems ranging from crumbling pipes and dysfunctional water treatment plants to a lack of adequate wells and drought.

2 Responses to The True Cost of Eco-Babble