Why I’m voting ‘no’ on the Housing Levy

Proposition 1 is a tax levy on the August 2016 primary ballot for Seattle voters. The levy would double the total amount currently levied for “affordable housing.” See the King County Voter’s Guide description on this item here.

Unfortunately, there is little to no research on the root causes of homelessness in this city and what the homeless demographic actually looks like. Among the many factors contributing to the problem – housing prices, unemployment, financial self-discipline, drug addiction, mental illness, government policy – no one knows how they interact to cause homelessness. In fact, nobody knows if it’s even possible to end homelessness in a place like Seattle, because it’s never been done under similar conditions. Seattle isn’t Spokane after all. Or Salt Lake City. This city is a magnet for people around the country. Lured here by the promise of good jobs, mild weather – or maybe even just cheap heroin – poor people are rushing here along with the “tech bros” and rich retirees, even as rents are zooming through the stratosphere.

Some hard questions need to be asked here. If Seattle builds more affordable housing, will it attract even more homeless (or soon-to-be homeless) people to our city? Will it encourage poor working people who might be making the rent elsewhere to quit their jobs and try their luck here? Because if it does, then building more affordable housing will only be perpetuating the problem rather than fixing it.

Another tough one: Where exactly are Seattle’s homeless coming from and what is our fair share of the homeless tab? Are we subsidizing other cities? Or countries? Seattle is a “sanctuary city” and thus attractive to illegal immigrants. What part of the homeless population do these immigrants comprise? –This is an especially painful thorn for politically correct  Seattle-ites to tug on. But ultimately they might have to.

While we’re updating the road map, we need to make some repairs to the car that’s supposed to get us to our destination. In this case, the non-profit housing industry. In the voter’s guide, in the statement AGAINST Prop 1, the authors note that it does not “exhibit fiscal responsibility.” I can vouch for that from personal knowledge. One of the chief beneficiaries of Prop 1 will be the Low Income Housing Institute (LIHI) and its director, Sharon Lee. Here we see Ms. Lee looking on approvingly as Seattle’s Mayor Ed Murray signed the proposal onto the ballot last spring: 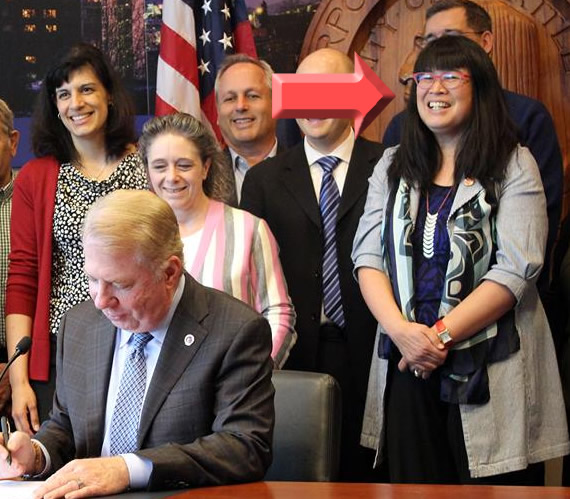 Lee’s non-profit organization builds and operates affordable housing around Seattle, with the help of tax levies like Prop 1. With a capitalization of some $50 million and an income of over $5 million, LIHI is one of Seattle’s biggest non-profit housing outfits, so naturally we’d expect to see Ms. Lee in the picture here. Unfortunately, Lee won’t answer questions about what she does with the public money she gets. Or helps others get. And that’s a problem. In 2014 Lee’s organization partnered with a church, another non-profit, and a local real estate developer to a put a homeless camp on a piece of undeveloped land near downtown. The developer got a $84,000 tax break in exchange for Lee’s promise that her organization would provide case management services to the people in the camp, to help them find housing. But according to the campers, Lee never provided that case management, and when I asked her to verify that she had, in fact, provided some services, she did not respond. (See that story here.)

Lee’s group also has a multi-year agreement with the City of Seattle and another organization (the Seattle Housing and Resource Effort or SHARE) to provide “emergency winter housing” for homeless people in Seattle. SHARE gets money from Seattle to rent space from LIHI for the shelter, but neither Lee nor SHARE can document that the shelter space was indeed provided or used. This leads me to believe that the money is not being used to pay for winter shelter at all but is instead going into the coffers of SHARE, from where it gets transferred into the pockets of SHARE’s director Scott Morrow. (Lee and Morrow are longstanding allies; Morrow co-founded LIHI in 1991 and was likely there when the group hired Lee in 1994.) 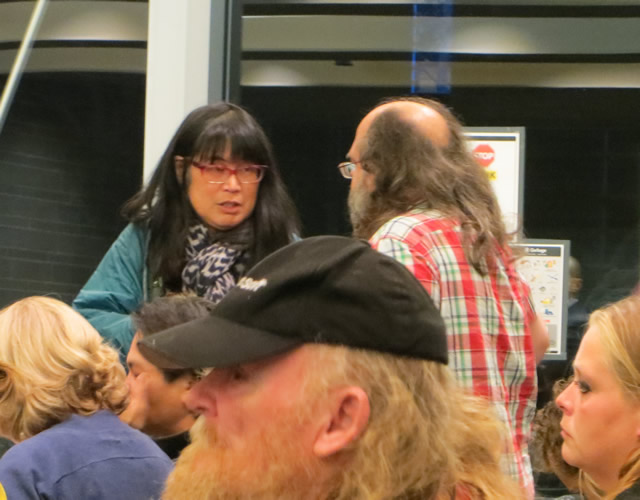 LIHI’s Sharon Lee confers with SHARE’s Scott Morrow at a political rally hosted by Councilmember Kshama Sawant in late 2015. Lee was a featured speaker at the event.

SHARE is a large recipient of City housing money in its own right and, like LIHI, the group does not account for how it spends that money. In May 2016, I broke a story on how SHARE has been using an unlicensed accountant for the past several years. SHARE claims to be getting its books in order and cooperating with the City, but when I asked them some basic questions about their tax returns last month – questions that it doesn’t take an accountant, licensed or otherwise, to answer – they simply refused to respond. (I’ll be doing another post on that shortly.)

SHARE and LIHI are among the worst offenders when it comes to malfeasance and lack of accountability, but they are surely not alone. Unfortunately, the City plays a role in abetting these organizations. City staffers and councilmembers have refused repeated requests from me to impose accountability on either SHARE or LIHI. Even the most liberal of councilmembers, Kshama Sawant, doesn’t respond to my requests for help with this . . . but when you read this article, you will understand why.

In 2014, the Washington State Auditor’s office audited Seattle’s management of federal grant money, which includes money earmarked for homeless programs. The audit found “deficiencies in the design or operation of internal control over financial reporting” that they considered to be “significant.” Below is an extract of the Auditor’s report:


This is all very concerning, particularly in the context of a situation where it can be shown that there are political and financial favors flowing back and forth between housing providers and City Hall – as we see from the Kshama Sawant story above.

As editor of the Blog Quixotic, it is my policy not to recommend that people vote for or against ballot measures or candidates. And I’m not changing that policy now. In this post, I’m merely explaining why I’m voting against Prop 1. I’m not urging anyone else to follow my lead.

I can see reasons to vote for Prop 1 as well. In the first place, it’s not going to break the bank. If it’s approved, the number of poor people housed in Seattle will certainly go up. Which is a good thing for those folks, at least in the short run.

Still, as a voter, the questions in my mind on Prop 1 are:

–Will it really do what it’s supposed to do? Will the number of homeless people on the streets of Seattle finally start going down? (And if so, why?)

–Will the organizations that get the money be required to account for it?

Unfortunately, I can’t see anything in the language of Prop 1 that addresses either of these questions. Therefore, I have to vote No.