On August 24, the Seattle Times ran a piece by columnist Daniel Beekman about the struggle between Mayor Murray and the city council over homeless folks collecting in hot spots around the city. In this post, I look at one aspect of how Mr. Beekman covered this story. Or rather, how he covered it up.

Beekman is usually a keen observer, but in this case he’s left out an obvious, and important, aspect of the homeless camp he visited. And in doing so, he misrepresented the story, not just for that camp, but for homeless camps generally. You can read the full article here; the part I’m concerned about is this:

The proposed ordinance could prevent officials from shutting down operations similar to Camp Second Chance. Since late July, about 20 people have been living together in tents on vacant city property near White Center.

The campers weren’t authorized to set up on the Myers Way South site, but their area is tidy, they’re out of the way and they have portable toilets.

Reading about the Camp Second Chance area being “tidy” and “out of the way” gave me pause. I’d been there recently myself and saw that lots of people were squatting outside the camp, in cars and RVs. To be fair, this stretch of road has been attracting RV campers for years, but there’s never been more than a few people there at a time, and they’ve always been concentrated around the turnout where the camp is. Now, a couple months after the camp moved in, there are campers lined up and down Myers Way S for hundreds of yards. And if you take a walk in the area (not recommended) you’ll catch a distinct whiff of urine and rotting trash that was never there before.

Don’t take my word about what it’s really like. See for yourself . . .

Below is a different view of the hangers on, from the same time as the video. The still shots don’t show all the car campers in the area, just the ones closest to the camp: 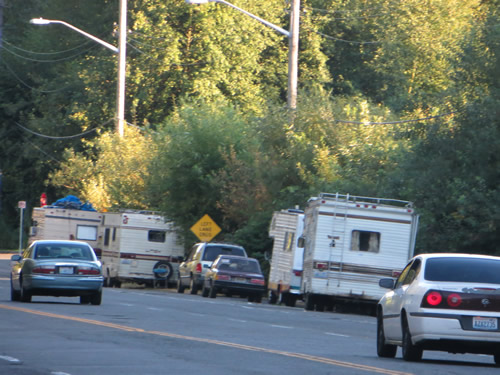 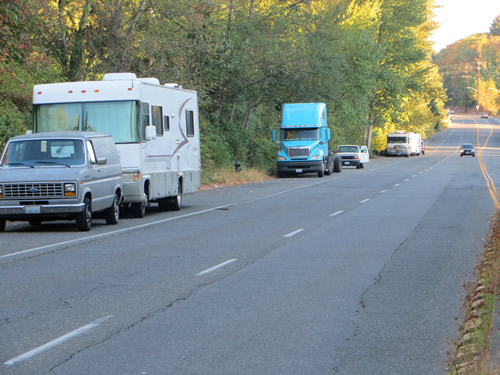 Does this situation look “tidy” to you? How about that tidy little trash pile half a block outside the camp gates?

Nor is it exactly “out of the way.” Although you don’t see houses in this one spot – which is a protected watershed known as Hamm Creek – the surrounding neighborhood is actually zoned for residential. In the video, you can see the entrance to the SHAG senior housing complex, for example. That’s just a couple hundred feet from the road and downwind from the trash smell. And a quarter mile to south of the camp, at the end of the greenbelt, there are single-family homes.

As I said, this isn’t a one-off deal for Camp Second Chance. It’s true of homeless camps generally. In addition to whatever few people these camps shelter inside, they tend to attract more homeless people to the surrounding area, along with the trash and squalor you’d expect from people living in those conditions. Once a camp is established, it’s not unusual for there to be more homeless people living around the camp than there are living in it, as we see with Camp Second Chance. And unlike the folks in the camp, the ones living around it are not subject to whatever rules and structure the camp has. When the camp moves along or is evicted, these hangers-on sometimes linger in the area for years, camping out by themselves in secluded greenbelts, panhandling at local shops. (See the links in the postscript below.)

In his piece, Mr. Beekman refers to the camp area. I guess by “area” he means the small plot of land the camp itself is on and nothing else. Although that distinction might technically be allowable, it is an artificial one. And in this case, it’s misleading. Beekman is painting a picture of Camp Second Chance in his readers’ minds, and by cropping that picture to leave out the RVs and trash all around it, he steers his readers to conclude that the council’s proposed legislation will have a much milder impact than it actually will. If that legislation passes, the police will effectively no longer be able to evict any group of five or more people living on public land. –But then, who’s afraid of a tidy little out-of-the-way camp here and there anyway, right? (Look, Ma! It’s like a street fair. They’ve even got prayer flags. Kewl!) 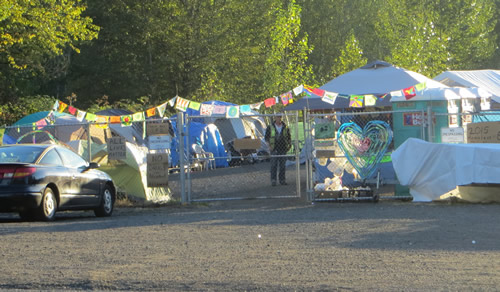 Given the time and space constraints he was under – not to mention the political considerations – Beekman probably shouldn’t have even mentioned Camp Second Chance in his story. But once he did, he should’ve been honest about the problems it was causing for the neighborhood.

No one knows better than I do that homelessness is a big. complicated story. Wanna tell that story, Mr. Beekman? OK. Tell the whole story, though, not just the part you think your liberal readers want to hear. Take all the time you need. Stand up to the establishment if you have to. Just get it right.

Pictures and story by David Preston

Here’s a lead for anyone who wants it. A friend of mine works in the area around Camp Second Chance. She was talking with a maintenance guy at SHAG housing nearby, and he said that police and parking enforcement were telling car campers to go to this area because it’s right on the city/county line, which is a legal no-man’s land where parking laws aren’t strictly enforced. Besides that, Seattle has already announced it will tolerate a homeless camp there, so it figures that they would also tolerate car campers, trash piles, and all kinds of other stuff.

Related stories on this blog:

Homeless Camps: Do they get people off the street?

Nickelsville: The Gift That Keeps on Taking

2 Responses to Tell the whole story please, Mr. B