Do you think she’s in danger?

May 17, 2021 ~ The following post was removed by Facebook from the Safe Seattle page for allegedly violating the platform’s community standards about sexual exploitation. Even though the pictures were blurred and no locations were mentioned. The story is obviously not about sex but about illegal drug use. –David Preston

Reader: Mid-afternoon on a day last week. I was driving along a major arterial in Ballard when I saw a fully naked woman face-down on the corner in front of one of the shops there. Her legs were sprawled out and she had blood smeared on her torso and other parts of her body. (I found out later that she was not wounded, so this must have been menstrual blood.) Although this was a high-traffic area for both foot and car traffic, it looked as though nobody had stopped to help, so I pulled over and called 911.

As I was describing the scene to the dispatcher, the woman began rolling around, flailing and flopping all over the sidewalk. She then sat up and started twitching, scratching herself, swatting invisible flies around her head, and talking to the air.

By this point, two other passersby had stopped, and I could see that one of them was also calling 911. One of them, a young man, tried talking to the woman, but she wouldn’t respond. She just continued chatting away with her imaginary associates in a language I didn’t recognize and was probably just gibberish. 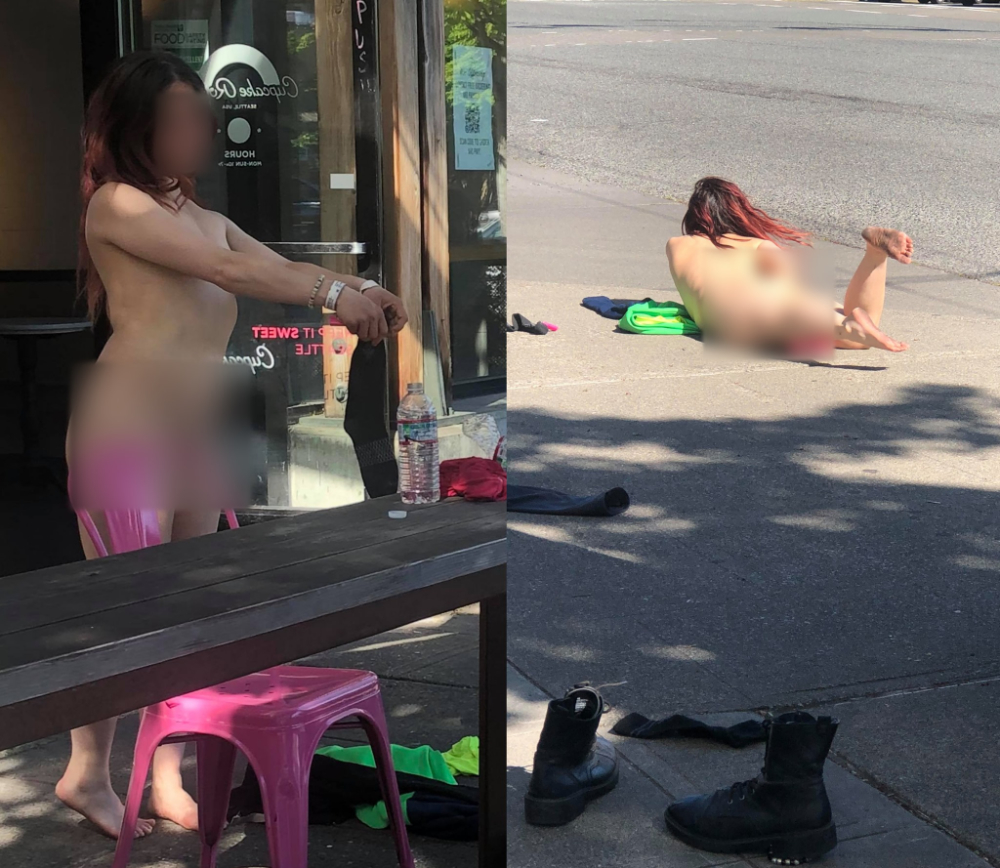 As you can see from the photo on the right, her shoes and clothes were strewn about on the sidewalk. After a few minutes (while we were waiting for either medics or police to show) the woman stood up, picked up her shoes and clothes, and, still stark naked, walked about aimlessly in traffic at the intersection, stopping cars and nearly causing collisions. Eventually she made her way to another shop where she stood on the patio and resumed her gyrations and conversations with imaginary partners.

The good Samaritan guy showed up again, approached her and offered her a bottle of water, which she took from him and drank up in the blink of an eye. He tried talking to her again but she continued ignoring him and went back to her hallucinations.

The first SPD officer then arrived. He approached her and said, “The nice people at this establishment say they need you to move on,” whereupon she snapped to for a moment and said, “I really appreciate that,” but she continued flailing and made gave no indication that she was going to leave.

He tried a different approach. “Have you had any drugs today?” he asked. “I don’t believe in that,” she replied.

He asked her if she wanted to go to the hospital, but she shook her head and said no.

“You want to buy some coffee?” he said. “You’re gonna have to put your clothes on to do that.”

At this point, he turned to me and the other two people who’d stopped and asked us what had happened. We told him what we’d seen, but, as it turned out, none of us had been there for the opening act.

Mind you, we weren’t the only people on the scene. We were just the only ones who appeared to be paying attention. This was all playing out on the patio of a boutique food shop with customers inside and individual pedestrians, couples, and even families passing by on the sidewalk just a few feet away. Except for a few of the kids, not one of them stopped or even turned their heads to look.

I asked the officer if there was REALLY nothing he could do. “What would you LIKE me to do?” he snapped. The frustration in his voice and actions was unmistakable.

I said, “Take her in for a psychiatric evaluation and or medical check.” He told me the police can only do that if the subject requests it, and this woman had clearly declined his offer.

I wondered if what we were witnessing was drugs or mental illness. “Drugs,” he said emphatically. “Look at her eyes.”

(Yes, I had noticed her eyes were bugged-out and wild.)

The officer told me there the woman wasn’t breaking any laws, since neither nudity* nor public intoxication are crimes in Seattle. He said the only way they could arrest for nudity is if someone complained that they were “offended.”

“Are you offended by her?“

“Well, if you’re not offended by the nudity we can’t do anything.”

“Do you think she’s in danger?”

“Sure, all kinds of danger,” he replied.

Two more SPD cars then arrived and the three of them began working jointly to persuade the woman to put her clothes back on. Eventually, she began dressing herself, but in her drug-induced confusion, she couldn’t figure out what piece of clothing went with what body part. She tried to wriggle both legs into a neck gaiter, and an officer said, as politely as you can imagine.

When the back-up arrived, the first officer told me to stick around in case any of them had questions for me, but now he said I was free to leave, and since I had an appointment to get to, I did.

It was 7 or 8 minutes from the time I called 911 to when the first officer arrived and the entire episode was about 20 and the whole thing felt surreal, from beginning to end. The woman’s behavior was shocking enough, but what was also shocking is that of the dozens or hundreds of people who passed by, no one seemed to take notice. I know they saw the woman and were aware of what was happening, but for some reason, they refused to look. Maybe they’re just learning to accept this as the new normal.

*There is no law against nudity. There is a law against “indecent exposure.” Washington’s indecent exposure law makes it a misdemeanor to “make any open and obscene exposure of his or her person or the person of another knowing that such conduct is likely to cause reasonable affront or alarm.” In other words, there must be lewd or obscene behavior for an officer to take action. In order for the police to make an arrest, we must have witnesses currently in the public place where the nudity is occurring who must make a complaint.

This entry was posted in Crime, Facebook, General. Bookmark the permalink.

2 Responses to Do you think she’s in danger?