The presence of transient sex offenders in Seattle points up why the city’s current approach to illegal encampments is so dangerous. In 1998, the man pictured below was convicted of sexual assault on a child. (Reference RCW 9A.44.083). Since then, he’s been convicted of violent felonies, in addition to failing to report his whereabouts. In November 2015, “Washington’s Most Wanted” showed him classified as a LEVEL II sex offender. Curiously, since then, he got bumped down from a LEVEL II to a TRANSIENT LEVEL 1. 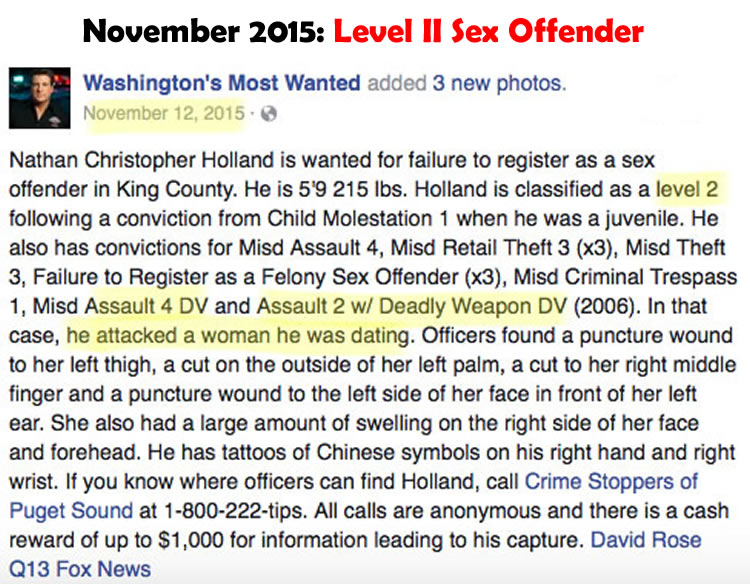 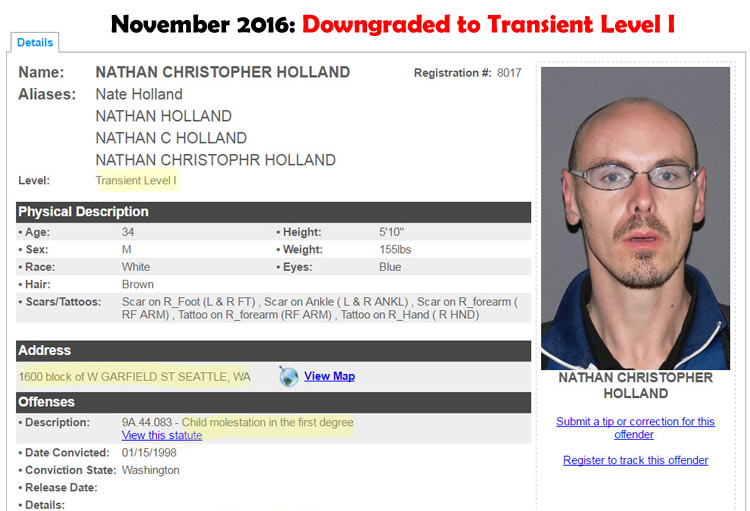 The reclassification to Level 1 means that the authorities now consider him as being at the lowest risk to reoffend, while the transient part means that he doesn’t have a permanent place to stay and therefore his reporting requirements are be lower. His current address is listed as the 1600 Block of W Garfield Street in Seattle. Or in other words, somewhere under the Magnolia Bridge. If he were at a stable residence in Seattle (even if it’s just a shelter) he’d be under the Seattle Police Department’s supervision. But as a transient, he’s in limbo, still nominally under the King County Sheriff but not really blipping their radar either. His info is out there online for anyone who knows how to check the database, but several of his violent offenses have been dropped from the profile available to the public, and this LEVEL 1 transient designation could give people a sense that he’s not that dangerous. But is that realistic? What is that based on exactly? It’s not clear. The average viewer isn’t even going to know that he was a LEVEL II just one year ago.

As for the offender, one can certainly see the attraction of a homeless camp. No one’s going to do a warrant check on him when he “moves in,” and he’s much less likelier to get regular visits from the cops there too. As for the neighborhoods, they’re pretty much on their own now, thanks to the City Council and the ACLU.

Were our city officials too shortsighted to see that this would happen when they opened the gates to homeless camping? Or were they just too checked out to care?

IMPORTANT: THIS POST IS FOR INFORMATIONAL PURPOSES ONLY. TBQ DOES NOT CONDONE THE MISTREATMENT OF ANYONE. HARASSING OR ASSAULTING HOMELESS PEOPLE IS UNETHICAL AND ILLEGAL AND MAY BE PUNISHABLE BY LAW.

2 Responses to Sex, Lies, and the Seattle City Council