Photos of anti-Trump protests in Chicago and Seattle tell two very different stories about political culture. The Chicago crowd (above) is large, varied, and rowdy. The placards there are hand-made, and each one bears a different message, unique to its creator. Chicago is typical of the country, as you’ll see if you read this story in the Atlantic. 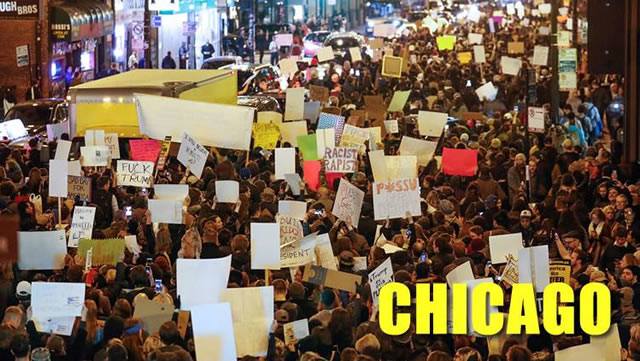 Now check out the Seattle “anti-Trump” crowd (below). 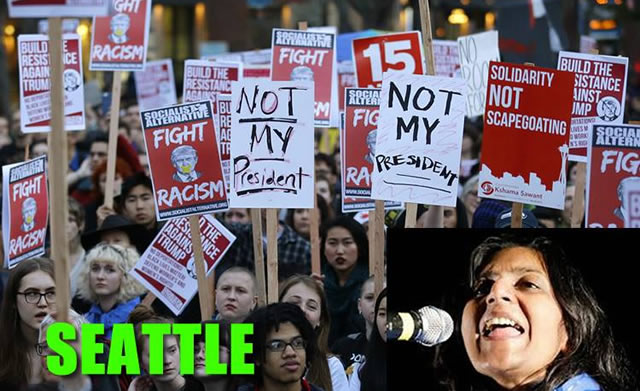 The Seattle folks are much more disciplined, and you can see at a glance that most everyone is carrying a slick pre-fabricated placard. Though there are several different messages on the Seattle signs, they all come from the same source: Kshama Sawant’s Socialist Alternative party. The signs, while purporting to be about Donald Trump, racism, or whatever, are really nothing more than ads for Ms. Sawant. And that’s what the whole rally is, really. Just one big ad for Sawant.

Sawant was portrayed on local TV as the chief organizer of Seattle’s rally, which also speaks to her influence on the local scene, which is huge. Since getting on the City Council three years ago, she has pushed the Mayor and other councilmembers decidedly to the left. If local politicians dare cross her in public, she denounces them on social media, in press conferences, and even right from the Council bench!

The same people toting the Sawant signs in this picture can be counted on to turn up at public meetings to “testify” in favor of Sawant’s legislative program – just as if they were honest-to-God concerned citizens instead of party hacks. And of course, during their “testimony,” they never fail to put in a plug for Ms. Sawant and her party.

It was never like this when I was growing up in politics here, in the ’80s and ’90s. Back then we had dozens of parties and movements on the left. Now we’ve just got Kshama. You can either line up behind her, or get out. This is Kshama Town now.