C is for Vengeance: A blogger and politician team up to punish critics

Have you ever written an angry letter or e-mail to a government official? Most of us have at one time or other. God knows I have. But did you ever think, when you dropped that letter in the mailbox (or hit the SEND button) that the person you were writing it to would hand it over to someone who would use it to threaten you? Well, that’s what happened to north Seattle resident Jennifer Aspelund. On December 13, Aspelund sent this two-page e-mail to the Seattle City Council (press the PAGE DOWN button at the bottom to see second page):

In her e-mail,  Aspelund is referring to a movement by some councilmembers to kill plans for a new police precinct building in the north end of Seattle, where Aspelund lives. Aspelund is angry because, according to her, City Hall is wasting money on non-essential projects and not doing enough to curb the street crime that’s been on the increase in her neighborhood. She feels that the Council is isolated in their “glass palace,” that they waste money and appoint bureaucrats to useless committees while the police department goes begging. Aspelund isn’t the only north-ender who feels that way, either. A number of neighborhood groups have formed around public safety issues in the last year, and Aspelund is a member of one of them. (I first met her in November, in connection with a story I was doing for the Blog Quixotic.)

The Girl Next Door

Aspelund’s is an outspoken government critic and has testified before the City Council in terms similar to the ones she uses in her e-mail. She has also been active – along with her neighbors – on the Nextdoor neighborhood blog site. And in that connection she came to the attention of one Erica C. Barnett. Barnett runs a local social justice-themed blog and has been critical both of the Nextdoor model and of the opinions expressed by many Nextdoor users, like Aspelund, who support the police and oppose the expansion of homeless camps and drug-injection sites. 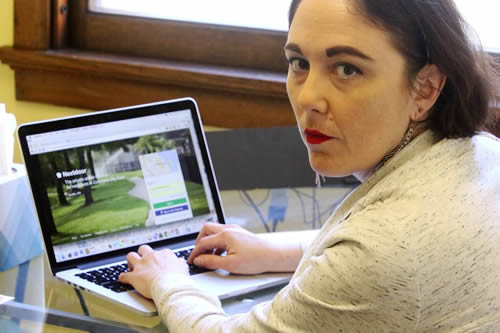 Last February, Barnett and several Nextdoor users were involved in a public feud over the issue of Barnett posting Nextdoor user comments on her blog, along with the commenters’ names and Barnett’s critical commentary. The users had believed their comments would be privileged to their own neighbors when they made them, since Nextdoor’s terms of service (TOS) – which Barnett had accepted – forbade copying of user comments outside the Nextdoor “neighborhood.”

For her part, Barnett felt that Nextdoor’s TOS was out of line, since the Seattle Police Department had been using Nextdoor as a conduit for discussions with neighbors. Barnett argued, with justification, that shielding those discussions from public view defeated the open government principle by which the police and other officials are supposed to abide. 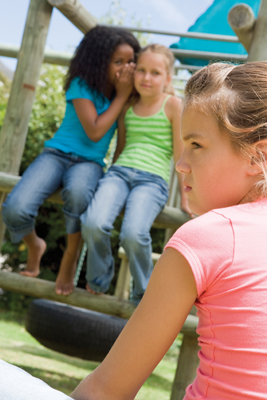 Barnett did not seek permission from the Nextdoor neighbors before posting their remarks on her blog, however. Nor did she give them any warning, or any notice afterward. In most cases, they found out after the fact, when someone told them that something they had said the night before on Nextdoor (thinking it would be private) was now splashed over Barnett’s blog, with Barnett saying, in effect: See how nasty these Nextdoor people are? They’re rich. They’re White. They hate homeless people. –And so on. (See the Seattle Times story here.)

In any place outside social justice land, Barnett would be ignored as a minor eccentric. In Seattle, however, she gets some traction. She’s a regular on the talk show scene and is a fixture at City Hall meetings, where she can often be seen tweeting color commentary like a sportscaster at a ball game. Over the years, she has cultivated close relations with various government officials. She is particularly close to Lisa Herbold, the Councilmember who was first on the “To” list in Aspelund’s e-mail. So this was the political situation prevailing when Ms. Aspelund penned her missive to the City Council: Aspelund is a known critic of both City Hall and Barnett. Meanwhile, Barnett and Councilmember Herbold are chummy with each other. And they both have reason to dislike Aspelund.

On the afternoon of December 13, just hours after Aspelund sent her e-mail to Herbold and the others, it appeared on Barnett’s C is for Crank blog, in redacted form. In her post (which you can read here), Barnett complains about unspecified persons who are allegedly harassing her by doing public disclosure requests (PDRs) on her correspondence with the City, contacting her associates in the media, and so on. As a parting shot, Barnett has Aspelund’s e-mail to the City Council, along with a gratuitous dig at Nextdoor and an admonition that “public disclosure law applies to everyone.”

I’ve been living my life online for a long time, and I’ve been the subject of online abuse for just as long. But I have seen a shift recently, not in the level of anger, personal vitriol, and gendered name-calling (the very name of this blog is in part a response to people’s incredibly clever comments about knowing what my middle initial stands for) but in the prevalence of conspiracy theories, as if the city, journalists, and advocates (especially homeless advocates) were somehow colluding to destroy Seattle to make themselves rich at everybody else’s expense. You see this on Nextdoor, certainly. But you also see it in emails to council members—like the one below, which was sent to all nine council members by one of the women who filed records requests for my emails. Which reminds me of another pro tip: Public disclosure law applies to everyone. –Erica C. Barnett

Barnett’s final words were a one-two punch. The first punch was a general warning to anyone who might be thinking of crossing her. (See? This is what I can do to you!) The second punch was directed against one person who actually did cross her: Aspelund. Only three people would have known for sure whom that second punch was being thrown at. One of course was Barnett. One was Aspelund. And one was Councilmember Lisa Herbold. But Aspelund didn’t know the Herbold link at the time; she had to piece that part of the story together for herself. 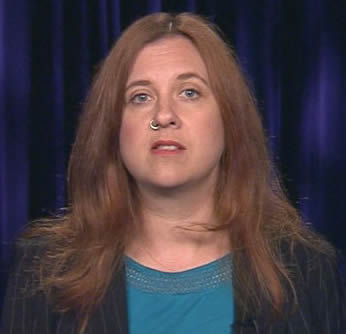 Aspelund follows Barnett’s blog, and when she saw her letter there, she naturally wondered how Barnett had gotten her hands on it. So she fired off another e-mail to the Council: Did one of you give my e-mail to Erica Barnett? –No reply. She then contacted the City’s Public Records Office with a priority request, asking for a record of where her e-mail went after it landed at City Hall. She was given a record showing that exactly one hour after her e-mail arrived at City Hall, Herbold forwarded it on to Barnett. Aspelund gave me that e-mail forward the next day. Here it is: 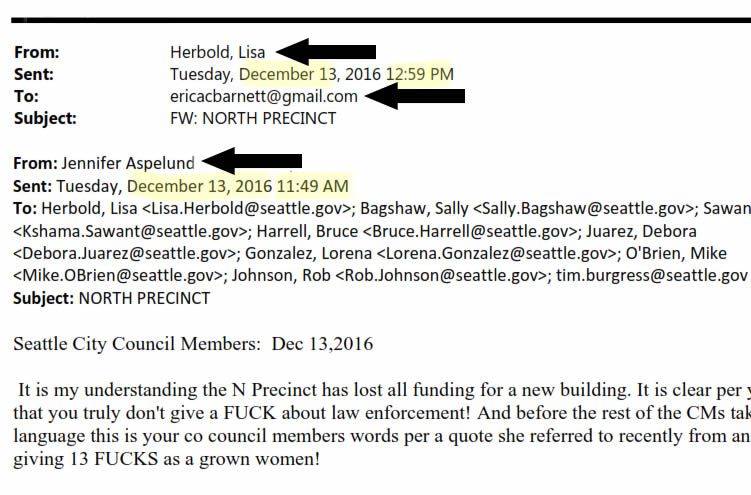 This was clearly a breach of trust on Herbold’s part, but it goes beyond that. The inescapable conclusion is that Herbold and Barnett were working as a team. It’s interesting that Herbold didn’t include any commentary when she forwarded this to Barnett. Not a single word. Possibly, she was worried about incriminating herself – though, if that’s the case, she obviously wasn’t worried enough. Another possibility is that Herbold didn’t feel she needed to tell Barnett what to do with Aspelund’s e-mail, given that Barnett has a habit of publishing other people’s correspondence. My hunch is that Herbold did give Barnett some suggestions here. Just not in the e-mail itself.

It would be useful to know whether Barnett solicited the e-mail or whether Herbold forwarded it on her own initiative. Perhaps it was a combination. Perhaps Barnett had an understanding with Herbold whereby Herbold would pass on to Barnett anything Barnett might be able to use to hurt her critics. Or Herbold’s. We may never know. I asked both Barnett and Herbold to comment for this story. Herbold didn’t respond at all. Barnett said only: “Your hunt for conspiracies at City Hall is weird and off base.” 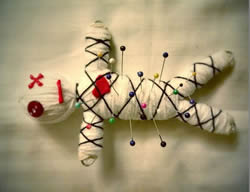 An ethical lapse? Or a habit?

The important thing here is not whether Barnett is the perpetrator (or subject) of some conspiracy; it’s that CM Lisa Herbold violated the public trust by forwarding a constituent’s e-mail to a third party without first asking permission. Or notifying the constituent. Or apologizing to the constituent after the fact. It’s inexcusable.

Could Herbold plausibly claim ignorance in this case? Could she say that she didn’t know how Barnett would use Aspelund’s e-mail? No. Given that Herbold is on close terms with Barnett, and given that she knows what kinds of pieces Barnett writes, it’s as sure as the rain in Seattle that Herbold handed that e-mail over to Barnett knowing exactly what Barnett would do with it. Based on how she handled Aspelund’s e-mail, it’s a reasonable inference that Herbold has passed other constituent correspondence on to Barnett as well. And will do it again. And why not? – when it’s such an easy way to get even with a problem constituent like Jennifer Aspelund. Need to do a hatchet job on a critic? Don’t risk getting bloodstains all over your dress. Send your blogger pal to do the dirty work.

I asked Aspelund if she saw the City Council in a different light as a result of this incident. “Absolutely,” she replied. “I don’t trust them anymore.”

–By David Preston, with assistance from the Safe Seattle research team.

18 Responses to C is for Vengeance: A blogger and politician team up to punish critics