So I was googling away with Google’s Maps latest beta version and just for google-giggles I did a search on “drug dealers near Seattle.” See? 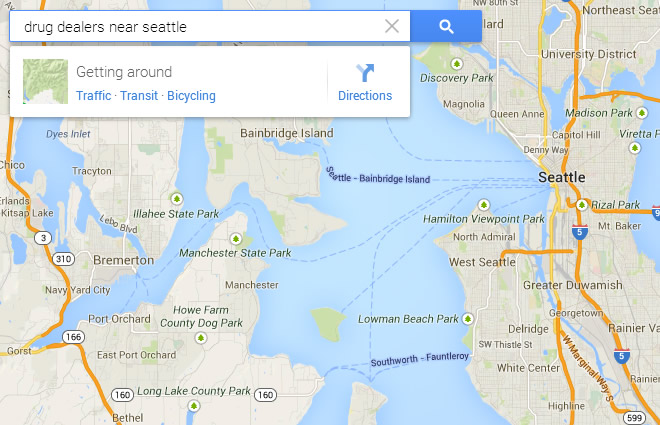 To my surprise, there were several hits . . . 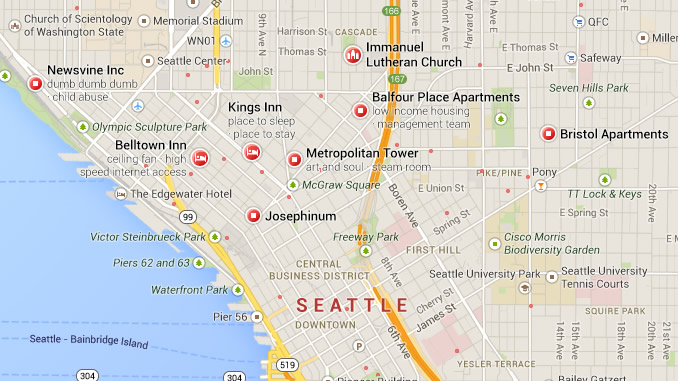 Look who made the list: The Josephinum Hotel. Belltown Inn. Bristol Apts. Some of these locations are, in fact, heroin hot-spots. Honesty in mapping, baby. You go, Google!

Look at Newsvine, Inc., whatever that is. Great publicity for them, huh?

Did someone at Google skip their Anonymous tribute payment or what?

It gets better . . . I scrolled down past Sea-Tac Airport and look what I found at Wellington Place Apartments. Drug addicts! 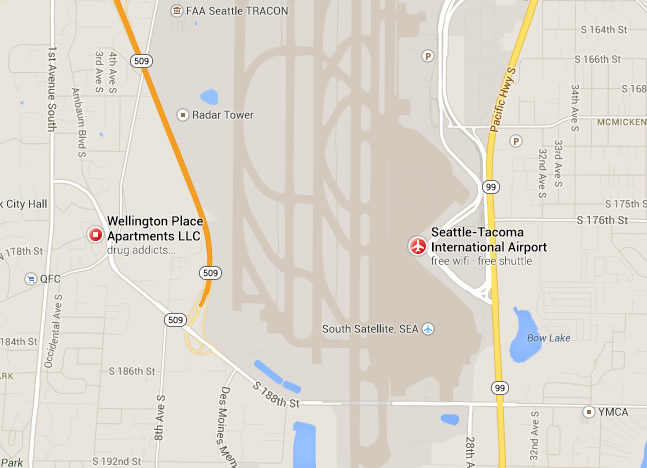 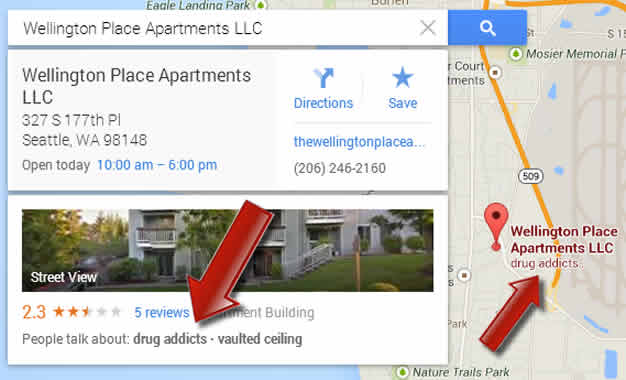 So . . . Wellington Place = drug addicts and vaulted ceilings, huh? Well thanks for that, Google Maps. That saves me time.

At first I considered this as a programming bug, but then I figured out that, strictly speaking, it’s not. It’s a logic bug. What Google did here was to tie in their map labeling with reader review comments from one of their other services. Check out the screenshot below to see how this works:

This is one of those deals that probably looked great on the drawing board on corporate HQ, when the software testers were working with cherry-picked data or a small sample. In the real world, though, people say some nasty shit about businesses on the Internet, and if you make that kind of stuff come up on a map label, you’ve got problems. Especially if you’re a high-profile company like Google. It’s like saying that Google is endorsing this perception of Wellington Place Apartments as a place to buy or use drugs. Is that what they’re really saying? No. But a lot of casual users won’t get that.

How long til Googles gets sued over this, I wonder. It’s not like they’re not in enough hot water already, right? –what with this huge class action lawsuit that’s been filed over them capturing people’s passwords and user data as they were driving through with their neighborhood snooper cars. I’m not sure how they can fix this, other than to add a comment-moderation feature to screen out the worst put-downs. But when you do that, you’re defeating the purpose of a review. If you lobotomize the reviews too much, people will ignore the feature. And in any case, Internet censorship is evil, right? Yeah. LOL. That’s the kind of shit that someone like China would pull . . .

(OK. This last screenshot was doctored. But the rest are real.)