The Ghettoization of the Soul

Here’s another Nickelsville hype piece from our friends at Real Change News. The story is designed to make you believe that Nickelsville is the last place of refuge for families with children:

It’s also designed to get you to accept that a woman could choose to bring two small children to live in a place like Nickelsville and still, somehow, be an OK mom. A caring mom. A fit mom. Real Change knows that once they can get you to buy off on a concept like that, you’ll follow them anywhere.

But first, briefly, a word about the connection between Real Change and Nickelsville. This is stuff you need to know in order to make sense of this story:

Nickelsville is run by a man named Scott Morrow, who also directs a local non-profit housing group called SHARE. On the governing boards of both SHARE and Real Change, sits one Anitra Freeman. On behalf of SHARE, Ms. Freeman has signed her name to several questionable federal tax forms (990s). These forms have significant gaps (in-kind contributions for example) and they contradict themselves in several places, suggesting that SHARE is either lying about how they spend their money, or they’re just not keeping track. I say they’re lying, but when I ask the Department of Human Services to explain SHARE’s accounting system, they blow me off by telling me that SHARE is under some kind of investigation. And they’ve been telling me that for several months.

For her part, Ms. Freeman does not answer my e-mails. But anyway, that’s the Real Change / Nickelsville connection. It runs through Anitra Freeman, Scott Morrow, and SHARE.

The research on homeless kids is not lost on Comfort. She knows that studies show that they score six percentile points lower than their housed peers in reading and math, largely due to the constant moving and poor class attendance. And she’s heard that, according to the U.S. Department of Education, half of homeless students do not meet their state’s test score standards.

Right! Somehow I doubt that this woman who can’t keep a roof of her kids’ heads knows about this “six percentile points” thing. If she does know about it, it’s only because the Real Change reporter told her for the purposes of this story.

More than 200 [families] are living like the Comforts: in a place not fit for human habitation.

Oh, OK. So here Real Change is at least willing to admit the obvious: that Nickelsville is not a fit place for children to live. So what’s the obvious conclusion? Get those kids out of there, right? –Nope. Not at all. Instead of getting the kids out of there, Real Change wants you to come to terms with the fact that kids are there. Not only that: they want you to like it! See? Isn’t little Caydon cute? Look at him getting on the school bus!

Please send money. And in the meantime, don’t trouble yourself about how many drug addicts might be living there at Nickelsville with little Caydon. Or how many felons. Or how many people with serious mental illness. In fact, don’t ask any questions about Nickelsville, right (unless you want to know where to send the checks.) In the meantime, look at the cute little kiddie!

What else do we know about Ms. Comfort? Well, if Real Change is to be believed, there’s this:

Comfort and her boys have been moving around since April, when Comfort lost her pizza delivery job and their Bremerton home and came to Seattle looking for a better opportunity. Since then, the family has done two stints at Nickelsville and spent four months at a YWCA emergency shelter.

If that’s true, it tells me two things. First, it tells me that Ms. Comfort is not from here. And in fact that’s true of most people at Nickelsville (families included). They’re not from here; they’re from somewhere else. In other words, they left a place where they probably had at least some root, some friends and family, or some kind of support network, and they came here, where they had nothing. Now why would they do that, hm? Seems like the obvious question to me.

So why didn’t the Real Change reporter ask Ms. Comfort that. Why didn’t they ask her why she came here, to Seattle, where the system is already grossly overburdened?

The second thing that tells me is that there is something wrong with Ms. Comfort’s story. Or something is missing. I know about the YWCA’s shelter-to-housing program, and I know they have a good reputation for helping women with small children. No, it doesn’t happen overnight, but it does happen . . . as long as you’re willing to work at it and as long as you cooperate with your case manager. If Ms. Comfort spent four months at the Y, and there were no prospects, that makes me suspicious. I’d like to have a word with Ms. Comfort’s case manager, but of course, that will never happen.

I did talk to several city council members last year, though, about homeless families. I asked them: “How can the City let children live in a place like Nickelsville?” They said: “We try not to let them live there. We offer the mothers motel vouchers and first-in-line access to other services. But more often than not, they turn us down.”

“We offer Nickelsville mothers help,” they said, “but they don’t accept it.”

–Now why do you suppose they would turn services down? The council members couldn’t say . . . –but hey! Do you know they have pet goats at Nickelsville? And swingsets? And free rent, for as long as you want? And best of all, the government won’t hassle you there. All on board the Nickelsville choo-choo, kiddies!! 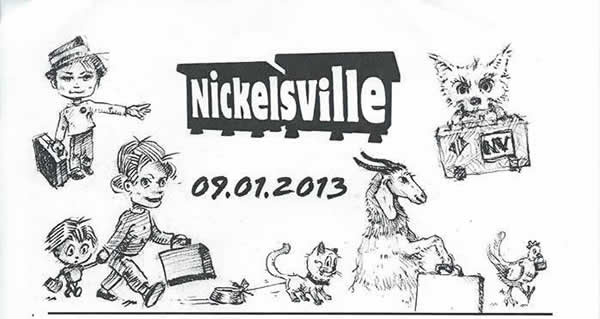 You know what’s really going on here, right? It’s simple. Real Change is spinning a tragic tale of woe, and it’s all about MONEY. Yes, it’s all designed to tug at our heart strings and get the government to keep throwing money at the homelessness problem.

And where does all that money go? Why, it goes to organizations like Real Change, and their pals at Homeless, Inc., of course:

1) How many friends Scott Morrow has in this town

2) How much money Seattle is giving to Mr. Morrow and his friends

3) How much worse homelessness seems to be here, relative to other places

Just think about that the next time you read a puff piece about kids at Nickelsville. In Real Change “News” . . . or anywhere else.

Remember: All you got is your soul. Don’t sell cheap. And don’t let Nickelsville lure in any more kids.

Also see here for another piece on Real Change’s relationship with Scott Morrow and Nickelsville. [click]

2 Responses to The Ghettoization of the Soul