A strange new thing is happening in Seattle. All over the city, in every kind of neighborhood, RVs are turning up on the streets – or just off them – and staying there. For months or years at a time. In the nicer neighborhoods, the RVs tend to be a little tidier. In the not-so-nice neighborhoods, they quickly accumulate debris: odd pieces of scrap, bags of trash, disused furniture. In a really out-of-the-way spot, a bridge overpass for instance, you might see several of these beasts pulled up together like a gypsy caravan, complete with a campfire in the center and a circle of lawn chairs around the edge. I snapped the picture below on a section of Beach Drive SW that runs between Me-Kwa-Mooks Park on the east and Emma Schmitz Overlook on the west. [Map View Here.] The RV has been there for over a year now. 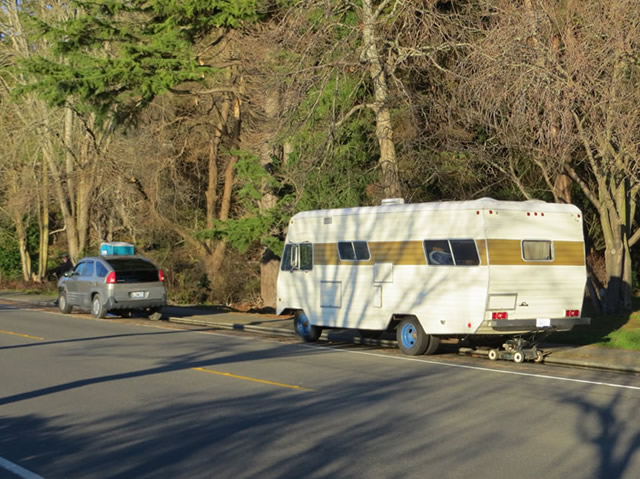 Although this is one of the tidier RVs, we can see that it’s already started the process of crapification. Note that there is a mower stowed under the back section, for example. (Why would an RV need a mower? Ya got me.) Also, do you see the silver car parked some thirty feet ahead? That might belong to the RV owner, too. Or maybe another person, encouraged by seeing the RV there all the time, has decided to stake his claim too. From closer up, the car looks to be disabled. There’s a blue tarp stuffed underneath, along with assorted junk. 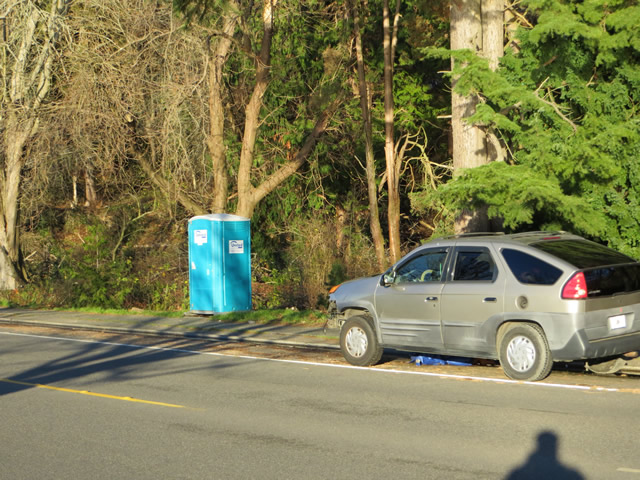 See the aquamarine port-a-pottie? ^^ That’s paid for by the City of Seattle. I don’t know why it was originally put there, but it must come in quite handy for the RV dweller(s) don’t you think? By using that, the owner doesn’t have to use their own in-board toilet, which saves money on waste disposal.

In short, the RV owner has a nice set-up here. What I want to know is whether he’s really homeless or he’s simply doing the gypsy thing to save on rent. He couldn’t have picked a better spot to flop. On one side you’ve got a gorgeous wilderness area with walking trails. On the other, a pleasant sea-wall park. This is the view looking north. Just around the bend there is famous Alki Point, where the settlers landed. From there you can see across Elliott Bay to the Seattle skyline. Average rents in this area ranges from $1500 per month to over $3,000 for a two-bedroom place. 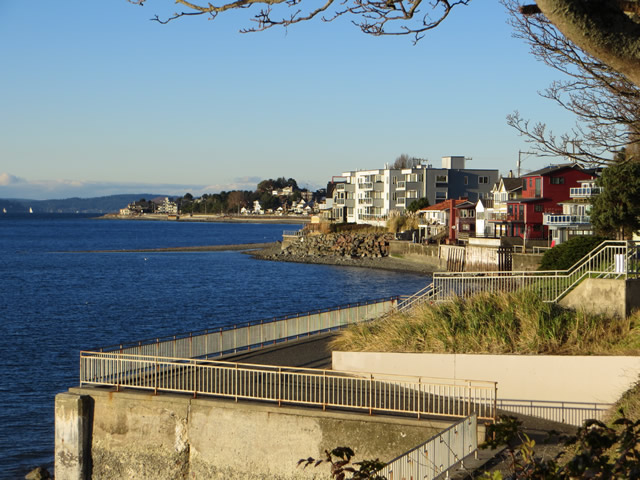 Hypothetical question: Let’s say you’ve got an income of $1,000 a month, which includes an $800 Social Security Disability check and $200 in food stamps. You could live comfortably in a one-bedroom apartment in Topeka and look at the grass all day or . . . you could scrounge an old RV and tootle on over to Seattle, with its year-round mild weather and spectacular views. The cops won’t hassle you, because in Seattle the government understands how it is to be homeless. Hell, if you play your cards right the City might even throw in free toilet service.

Which option would you pick? Blow your whole check and still be in Kansas? Or park your ass in Paradise and have some clams left over at the end of the month?

But maybe I’m just being cynical, so let’s do another hypothetical. Let’s assume that the RV guy really doesn’t have a choice. Let’s say he’s fallen on hard times and is genuinely homeless, and that he’d really prefer to be living in an efficiency apartment. So great! A social worker makes contact with him and tells him there might be a subsidized place for him, but to get into it, he’s got to get on a waiting list, and then he’s going to have to do the following:

Realistically, what are the chances of a normally intelligent adult – even a homeless one – trading a view home on wheels for a spot on in a crowded shelter on the theory that it might lead to a permanent housing? (You tell me.)

The City of Seattle is exploring the idea of creating special camps where people can live for free in RVs. Some people are critical of that (see news stories here and here) but City Councilmember Sally Bagshaw likes the idea. For her comments see here. The program is apparently not going to require anybody to get their RV off the streets, nor will it include a means for determining who is genuinely homeless and who’s a gypsy. Plans for getting the RV owners hooked up with long-term housing and social services (mental health care, addiction counseling, job training) are fuzzy. But perhaps most troubling, there won’t be any sanction for those who choose to remain in their campers, in the RV camps, indefinitely. In other words, there won’t be any penalty for coming to Seattle in an RV; there will only be rewards for doing so. Given this, do you think the program will result in fewer RV campers on the streets of Seattle? Or more?

If you want to share your thoughts on this with a politician, you can contact Councilmember Bagshaw vial e-mail here: Sally.Bagshaw@seattle.gov or by phone at 206.684.8801. Other Councilmembers can be reached through this page. 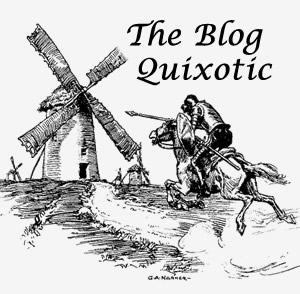