At some point we have to make hard political choices [on upzoning].
–Seattle councilmember Rob Johnson 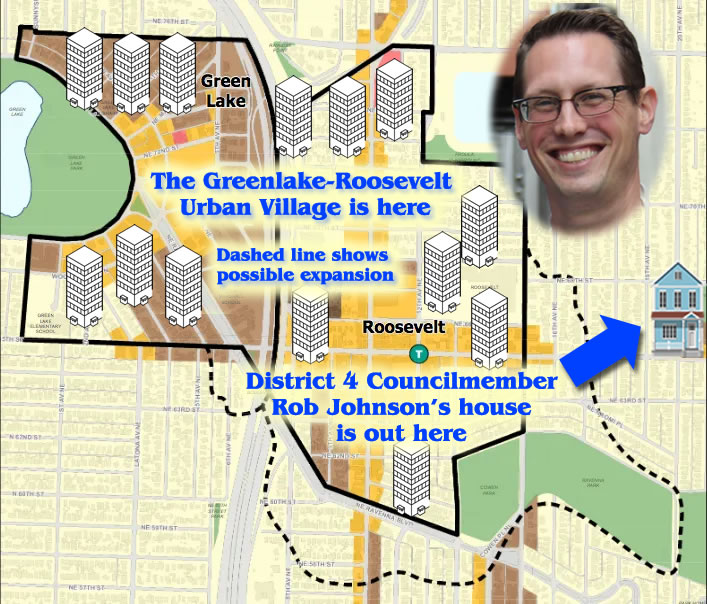 One-term* Seattle councilmember Rob Johnson pushed hard for upzoning in his district and around the city. Ironically, the Urban Village boundaries drawn up for his neighborhood of Roosevelt missed his house by just a couple blocks, which is particularly interesting when you consider that he was on the council’s Planning and Land Use Committee and that he lives within walking distance of the planned Roosevelt link light right station. Neighborhoods around other light rail stations in Seattle have already been upzoned to accommodate all those extra downtown commuters who want to live near a light rail station. So why not Johnson’s? ▼▼ 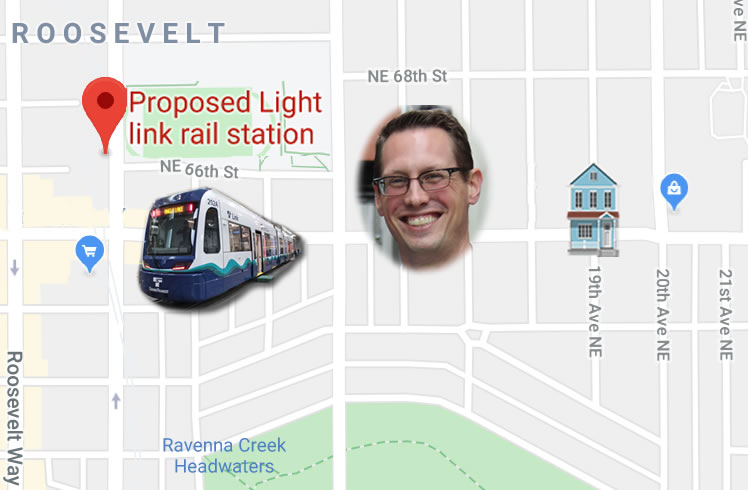 There’s no evidence that Johnson influenced the Department of Planning and Development to exclude his street from the Roosevelt Urban Village, but it’s almost certain that the people who drew the lines knew where he lived.

In 2015, when he was running for office, Johnson appeared with his opponent on the Seattle Channel’s Seattle Inside Out and floated the idea of taxing all properties within the new urban villages as if they had already been converted to the “highest and best use” for the newly rezoned area. This would mean that a single-family house would be valued and taxed as if it were already a mid-rise apartment building, a factor of several times more value than the original property. The reasoning behind this change was that it would encourage homeowners in the urban village area to sell out to developers more quickly.

The above ▲ is an excerpt from a Seattle Inside Out program that aired on November 2, 2015.

According to our sources, when a resident later questioned Johnson about his proposal at a packed Wallingford Community Center meeting, he said he was referring to a specific few properties, not the whole Urban Village area. However, his remarks on the Seattle Inside Out program seem to belie that claim. In any case, by law, property taxes cannot be fine tuned to target specific properties for conversion or removal.

*Less than one term, actually. Johnson left his council seat eight months before his term was due to expire so he could take a job with the National Hockey League. This was just weeks after Johnson had assured his constituents that he’d finish his term.

Excerpt from the February 7, 2019 “Civic Cocktail” program on the Seattle Channel: