The Hypocrite and the “Hate Group”

Following standard journalistic practice, I contacted Paul for a comment before running this piece, and here’s how that went. I’ll discuss Paul’s references to my role with Safe Seattle below.

David: This is David Preston from Safe Seattle. I have some questions about a story I’m working on. It concerns you.

Paul: What are the questions?

David: In 2018, it seems you applied for, and received, a property tax adjustment on your Wallingford house, which knocked off $127K in assessed value. Also, in the 2009 notes show that you complained about your views being blocked in another attempt to have your assessed value lowered. How does that square with your many public comments about the wealthy not paying their fair share in taxes?

Paul: Dear David Preston of #SafeSeattleIsAHateGroup: As you know, Washington has the most regressive tax system in the country. In fact, Seattle is one of the lowest tax cities in the nation. As a well-functioning society requires a just and equitable tax system, I firmly believe and support that those with higher income and/or wealth should pay a higher tax rate. Thus I would be happy to pay an income tax in Seattle and Washington, and I am happy to continue to pay property tax. Finally, if you publish personally targeted online harassment of me, including but not limited to doxxing, that results in ANY mental, physical, or financial harm to me or my family, I will hold you both civilly and criminally liable to the fullest extent of the law per RCW 9a.46.020 and 9a.46.110.

David: You might want to reexamine the statute and case law on that, Paul. Your public records and public statements are not privileged information. But while we’re on the topic, I’d think that calling someone a member of a hate group would be more likely grounds for a successful civil action.

Paul: Your use of public property information for commercial use or for the purpose of harassing or stalking an individual is not permitted by law.

You’re welcome to make your points without engaging in, promoting, or encouraging any targeted personal stalking or harassment.

But given your group membership this seems like a tall order. Best of luck!

More hypocrisy. And a dash of hate.

Before responding to my request, Paul inserted a Twitter hashtag referring to the fact that I co-moderate the Safe Seattle Facebook page, which is devoted to a pragmatic and commonsense discussion of public safety, homelessness, and drug addiction. The page is mild by social media standards, with clear posting guidelines and strictly enforced rules against abusive language. Unsurprisingly, it’s become a lightning rod for criticism by Paul and his social justice cohorts. The #SafeSeattleIsAHateGroup hashtag was created last summer by local hard-left activists, who tweeted and retweeted it among themselves, trying to make it trend and therefore rise in Twitter’s ranking of “things people are talking about.” It rose for a few days and then crashed.

The people who tipped me off to Paul’s property tax appeal sent along a sampling of Paul’s social media posts about me and the Safe Seattle page, and I’ve included those below.

Let’s put Paul’s accusation about me doing “targeted harassment” of him into perspective. In my Social Justice Hypocrite blog post about him, I using only publicly available information. At no point did I tell him I was going to “doxx” him (that is publish his full name or address) and at no point have I ever done that on Safe Seattle or on this blog. And yet he’s worried about targeted harassment. Why? Is it because that’s something he himself would do to others?

The tweet below mentions Chris Rufo and Ari Hoffman. That’s telling. Those individuals were both conservative candidates in the 2019 city council election. Rufo dropped out of the race after a few weeks, claiming that he’d been forced out by harassment of his wife on social media. Hoffman, an Orthodox Jew, stuck around longer. He was eliminated in the August primary, but in the meantime he was targeted by anti-Semitic death threats following an intense campaign of online vilification that included thousands of tweets like the one Paul made below. ▼ 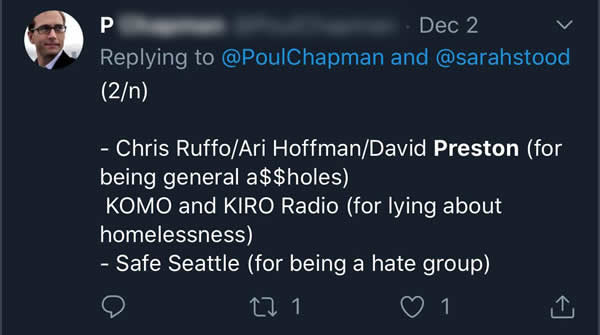 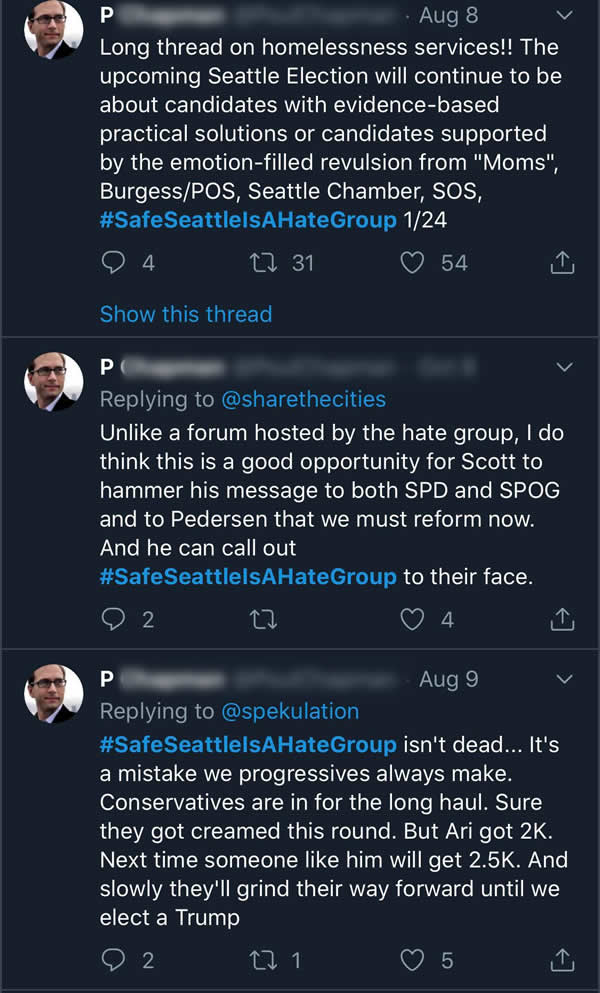 The tweet below is particularly telling, because it shows Paul claiming that two private individuals at a public meeting are members of a hate group. In his tweets, Paul never gives his definition of “hate group,” nor does he explain what it means to be a “member” of Safe Seattle, yet he has no compunction about posting photographs of people, calling them out by name, and saying, in effect, This guy is a member of Seattle, which is a hate group. 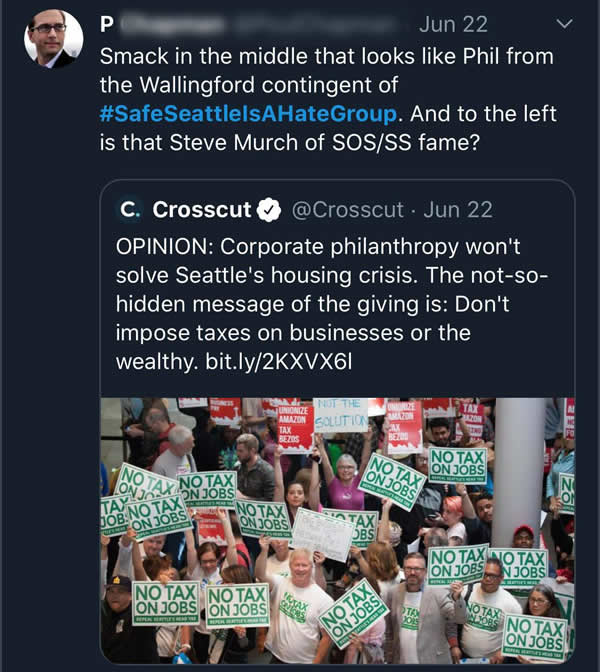 Here’s Paul is suggesting to his friend Matt Watson, a left-wing Seattle Twitter celebrity, that they go protest at the house of former city council candidate Ari Hoffman, a guy who has already been in the news for getting death threats. Doesn’t seem like Paul’s the kind of guy who’d have a problem with “targeted harassment.” ▼ 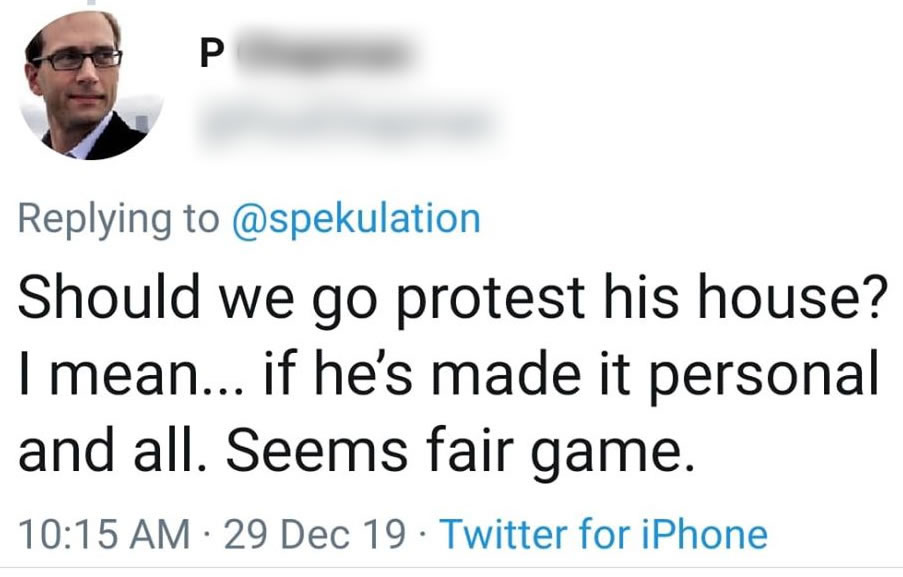 To my knowledge, no one has ever been successfully sued for publishing information about publicly available tax records or social media posts. Yet people have been sued, and successfully, for defaming others by accusing them of being in “hate group.” See the Nawaz v. SPLC case, for example.

The answer is obvious, isn’t it? He’s a hypocrite.