The City of Burien has done it again. Except this time, every homeowner in the city should pay attention as the latest indifference to resident concerns means new risks to property values and health. Residents who view exposure to wireless signal as a health concern for their children and those nearing retirement, with limited ability to pick up and move, have been very vocal. 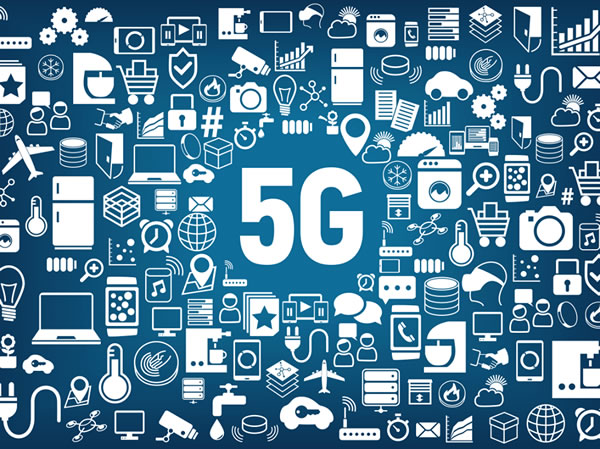 A 5G logo illustrates the Internet of Things concept the new technology will make possible.

The issue is a nearly forced implementation of new 5G** and 4G wireless “small cell” antennas planned for utility poles located in residential right-of-ways throughout Burien. If you aren’t affected now, you will be eventually. Small cell 5G networks are a massive, national wireless initiative to grease the market for Internet of Things, e.g., internet-connected “things” such as heating controls in homes, appliances, cars, medicine, medical equipment, clothing, and anything else in which an Internet-of-Things buck can be made. For telecom companies, it is the equivalent of a new Internet dot-com era. They are feverish to grab market share and relentless in lobbying for legislation that takes the control from local towns on the question of if and how 5G small cells are implemented.

Once installed, a utility/telephone pole bearing a small cell antenna legally becomes a “wireless facility” subject to the Personal Wireless Services Facilities Code. This gives wireless companies blanket permission for future modifications of the equipment, wiring, possibly tree clearing, etc. It also renders the facility and related projects subject to Federal law, which imposes a 90-day time limit or “shot clock” on consideration of applications for the collocation of wireless equipment.

In Burien, utility poles are often located on top of property lines and less than 30 feet from where a bedroom or living room is located. Residents whose homes face an existing utility pole located in a right of way – meaning curbside, sidewalk, alley or path through their property – receive the most concentrated exposure to 5G short millimeter wave signal through windows that face the pointed direction of these antennas. 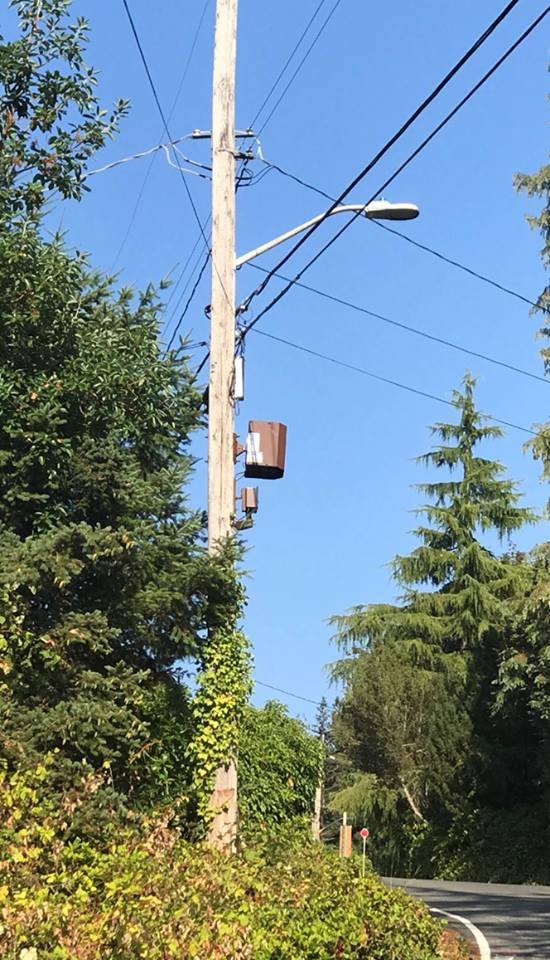 In November 2017, the City of Burien approved Ordinance 679, granting Verizon a franchise for access to Burien residential right-of-ways. In 2017 and early 2018, Verizon submitted applications for three small cell networks in Southern Heights/Beverly Park, Gregory Heights/Maplewild and South Lake Burien – totaling around 43 utility poles targeted as small cell wireless facilities by Verizon. In response, around 200 Burien residents sent in protest letters or signed petitions submitted to City Planning staff Chip Davis, Director of Community Development and Chad Tibbets. Residents were unhappy about losing the right to limit their exposure, and their children’s exposure, to Radio Frequency their homes. They cited concerns with 5G health risks, detrimental effects to home value and enjoyment of their properties, and concerns around the notification, feedback, and approval process as a whole.

Many residents, however, had no opinion because they simply had no idea what was being proposed. They felt they had been misled by the City’s letter and “Proposed Land Use” signs.

The Burien City Council and Planning staff have already approved the applications for Southern Heights and Gregory Heights, ignoring citizens’ letters, petitions, phone calls and comments at City Council meetings. Meanwhile, they are conducting ongoing meetings with Verizon and other telecom companies to solicit revisions to the Burien city code that contains local control language over these decisions. 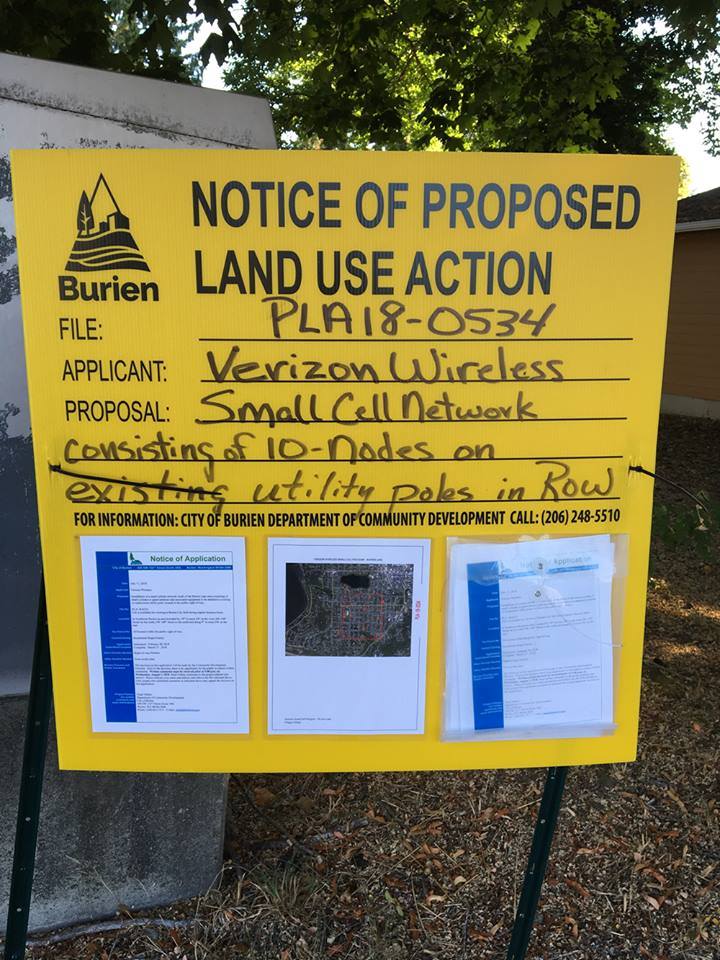 Yellow “Notice of Proposed Land Use Action” signs were placed in neighborhoods where the nodes were proposed to be located, but they were few in number and often not located at or near the poles where the transmission nodes would located.

The draft edits to Burien City Code 19.50 if approved, will place the interests of the wireless companies by streamlining approval steps and creating exceptions for small cell implementations and support structure that preempt resident input processes. One proposed edit to the code creates a 90-day automatic approval, while another steers small cell sites away from the downtown commercial zone and into single-family residential zones. Similar edits can be seen in other city code documents around Seattle.

At the State level, there is no legislation preempting local control on approvals to implement small cell antennas. Proposed legislation that tried to do this failed to pass. But sadly, it doesn’t matter, because Burien officials seem to bending over for this anyway. Perhaps directly engaging the less experienced, more gullible elected officials in cities and town to influence them to give up their own controls voluntarily is the latest tactic where state legislation efforts have failed.

The puppet master in Washington appears to be Ogden Murphy Wallace, a law firm specializing in wireless industry legal services that is advising a consortium of more than 20 Washington cities on how to get 5G implemented. Ogden Murphy Wallace says it is representing City needs, but we feel they are not doing it in the way residents would like. It is more like orchestration. Thus far there doesn’t appear to be any formal citizen representation in the working sessions where policy changes are promoted.

At Burien City Council meetings, questions about safety have been put to bed with hot-air responses from Verizon and fluff presentations on 5G from Ogden Murphy Wallace. Elana Zana, a partner at the firm representing the consortium, writes how-to articles that demonstrate her expertise in helping to push 5G along. Nowhere does her article advise to engage the community or inform property owners or include citizens in the process. Burien City Council members and Planning staff are along for the ride. 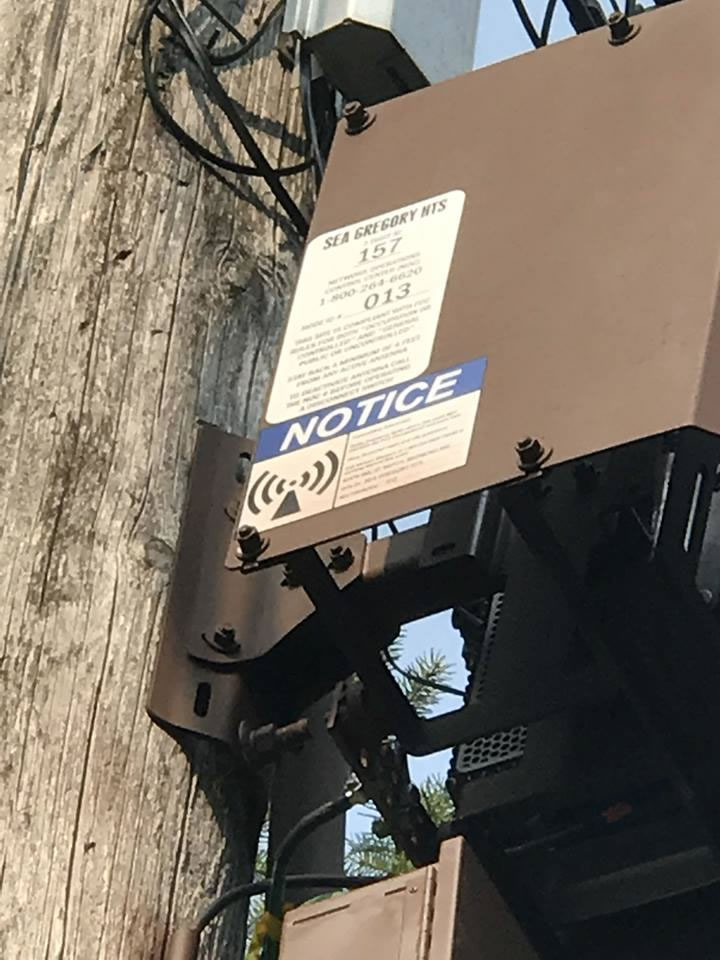 A warning sticker on a node in Gregory Heights notifies readers that the node creates an electromagnetic field.

We’re not sure why Seattle was one of 11 cities identified nationally by Verizon to “pilot” their small cell initiative, making Burien residents some of nation’s first guinea pigs for 5G. Perhaps Seattle leaders were seen as easy marks to push this program along. As the initiative started up, Verizon and Comcast were already contributing to the salaries of two Seattle city employees to identify applications for streamlined reviews. This puts the onus on Burien residents to understand the policies being developed and the level of influence occurring. But the City Planners are not forthcoming to help the community engage. And we know that Burien City Council habitually demonstrates only superficial interest and a whole lot of naiveté when it comes to steering decisions affecting the local economy, resident health, and safety.

The most recent Planning Commission session on August 22, where telecom companies were invited to present, mysteriously suffered a recording glitch where only an audio recording was made, according to City staff. A resident who requested the recording was told she had to submit a Freedom of Information Act request for it. This is unusual for a public meeting that has the precedent of normally being recorded and posted online for on-demand viewing. 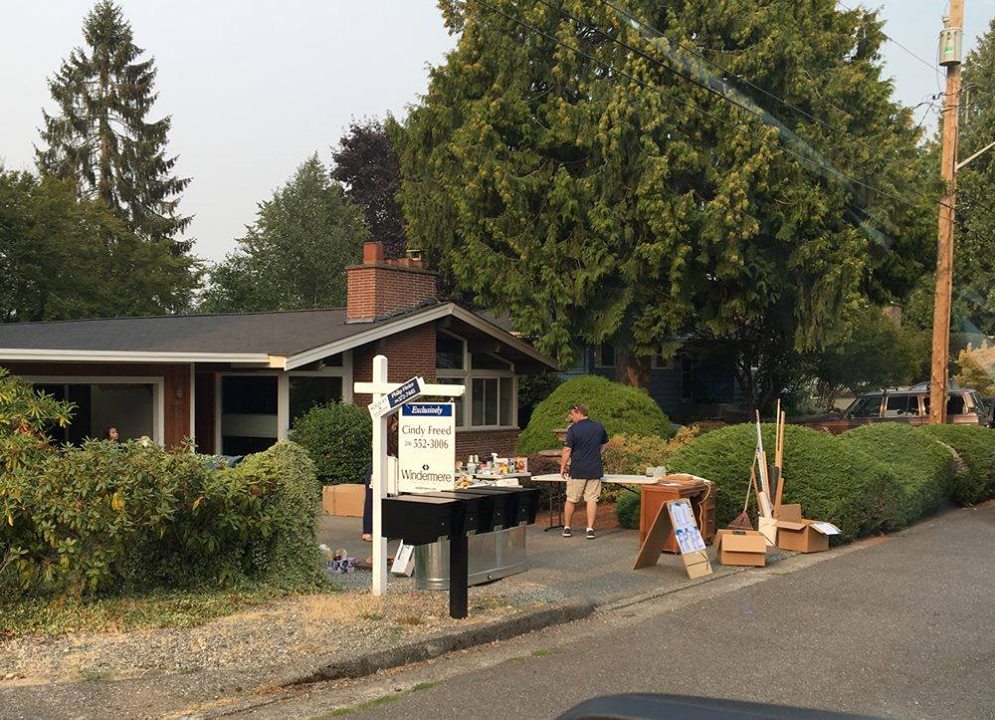 Some residents are selling their homes rather than being exposed to potential health hazards of living too near a small cell transmission node.

We encourage Burien residents to look at the draft code for small cell deployment in our city and to express concerns at meetings now, before it is too late. Also, residents should attend City Planning and City Council meetings to have earlier awareness and a voice in the process. We will keep you apprised of those meetings as they are scheduled.

If you have questions, please post them on this page. Our staff will be monitoring the response and will answer questions directly or through the page moderators. Thank you for reading. Please see the references below for more information…