Below is a catalog of posts and pictures that were banned on Facebook for violating their “community standards.” The pictures are in reverse chronological order. Most were originally published on the Safe Seattle Facebook page, which I manage.

Facebook doesn’t tell users what specific standards they’ve violated, but here are some that they might have applied, however inappropriately …

This picture was sent in by a resident of the North Aurora neighborhood in Seattle. It shows a prostitute working the street near SHARE’s Licton Springs “low-barrier” homeless camp. I added some text to the picture, which was originally shared to the page by a reader, but that text was removed by Facebook before I could save it. In my comments, I noted that since the Licton Springs camp went in, prostitution has increased in this neighborhood, and I suggested that woman in the picture might be an example of that: 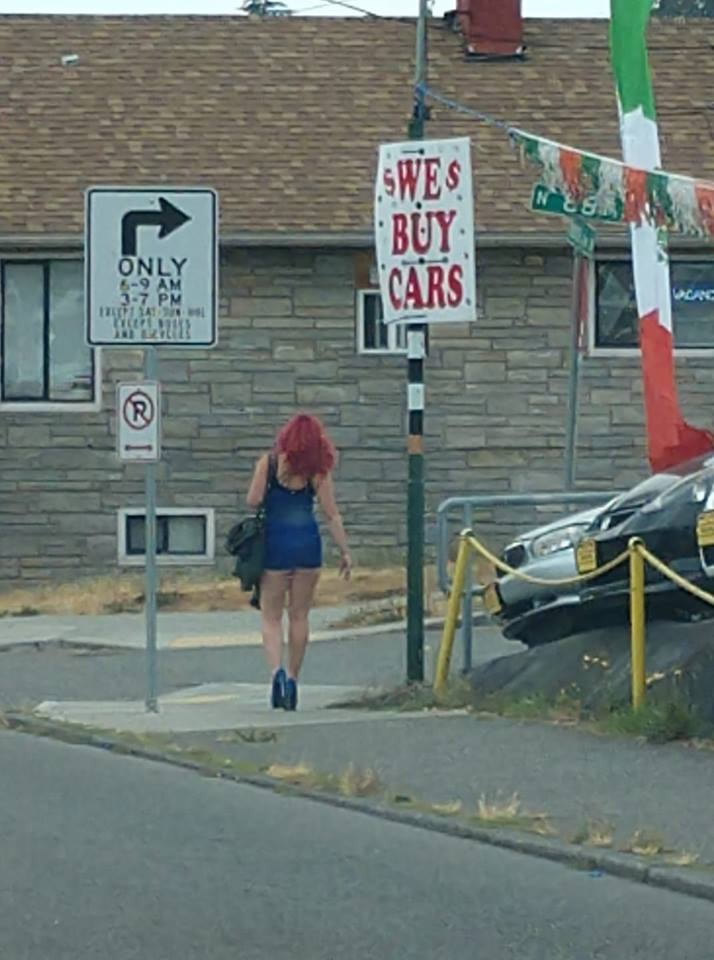 See an expanded story on the Licton Springs camp here.

I responded that prostitution is criminal activity and not “sexual activity” in Facebook’s sense of that word, and while he didn’t disagree, I knew that the Facebook review team had made their decision and weren’t going to reverse it. I then asked the Facebook staffer, rhetorically, whether Facebook’s policy meant that Safe Seattle readers were not allowed to discuss prostitution occurring on their streets. He replied that he thought we could discuss prostitution, as long as we did so carefully.

Facebook claims they removed the post for the commentary rather than the picture, but that’s clearly not true. An all-text post speculating about whether there are prostitutes on North Aurora would not have been removed. Conversely, this picture alone, without the text speculating that the woman might be a prostitute, would not have been removed. It was the combination of picture and suggestive text that got the post removed. Fortunately, the picture had been shared to us by a reader and I merely added the text. Had I posted the picture directly, Facebook would have banned me as well as pulling the post.

July, 2018 ~ Anti-Defecation League
or “A picture’s worth a thousand turds”

A variant of this picture was reported and removed. It also earned the owner of the  Seattle Looks Like Shit page a ban. The image shows a man defecating at the entrance to the Ross clothing store at 3rd and Pike in downtown Seattle. Feces are visible dropping from the man’s buttocks onto the sidewalk. It’s gross, but it really happened. In fact, it’s a regular occurence in this area. 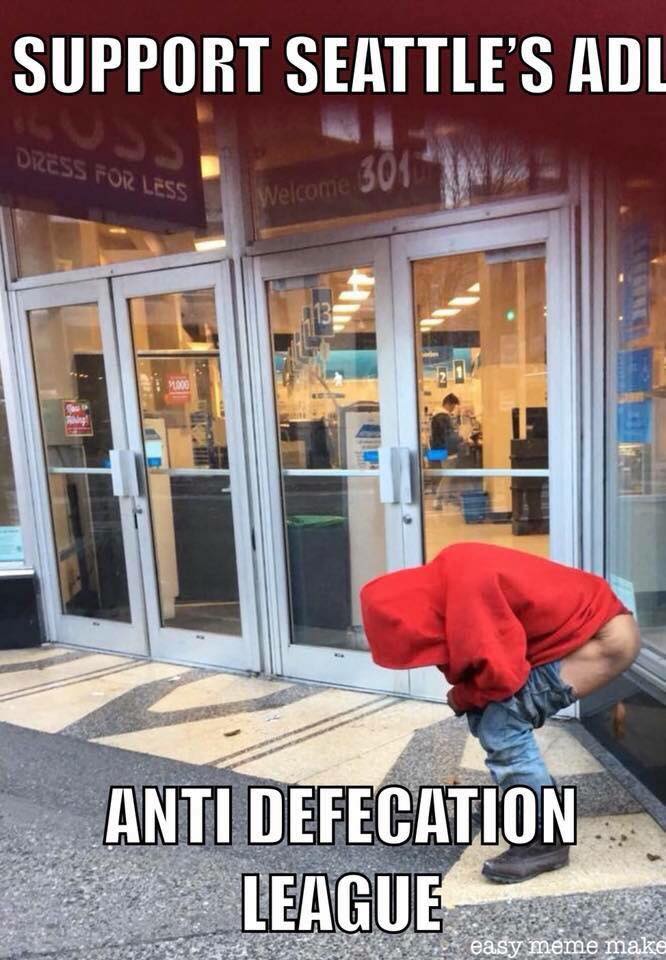 Seattle Looks Like Shit is a popular page that has been featured in the local media and regularly posts content of this type. I agree that the picture is generally offensive and that it does violate Facebook’s “community standards.” However, at the same time, I feel that the Facebook policy puts Seattle in a bind, because it effectively prevents us from talking with each other about scenes that occur daily on the streets of our city and therefore affect us all. How can the citizens be mobilized to stop this behavior if we aren’t allowed to tell each other that it’s happening?

The note and photos below document criminal activity. They were sent to us by Ari Hoffman, a Jewish man who has been fighting a years-long battle against the desecration of the Bikur Cholim cemetery in Seattle, where members of his family are buried. You can read more about Ari’s saga here.

This couple was caught having sex in Seattle’s Bikur Cholim [Jewish] cemetery. No arrest was made, but we filed a report anyway. Saw them wandering the neighborhood later in the day. –Ari Hoffman

This material was originally published on the Safe Seattle Facebook page in late May 2018. Because the crimes were alleged rather than proven, faces in the top photo were blurred, but the second photo was left unblurred because the individuals’ faces were not clearly visible. Two weeks after it was published, the second photograph was flagged by someone “brigading” the page and trying to take it down. Facebook removed the photo on the grounds that it violated the company’s mysterious “community standards” and without further explanation or appeal banned the poster from using Facebook for three days, with a warning that they could be booted from the social network permanently if further violations occurred.

Do you like what I do on the Blog Quixotic? Then please reward it!