Letter from the ‘hood: No more homeless camps here, please!

August 11, 2018 ~ Camp Second Chance is a sprawling cluster of tents and shacks located on Myers Way South, in the Highland Park neighborhood of southwest Seattle, just inside the Seattle city line. The camp popped up in the summer of 2016 when a handful of people from SHARE’s Tent City 3 homeless camp in north Seattle broke a lock and illegally occupied a patch of vacant land that had been set aside for a park just months earlier. The founding campers told me they were dissatisfied with SHARE’s management of Tent City 3 and wanted to create a new kind of camp modeled on sobriety and genuine self-management. 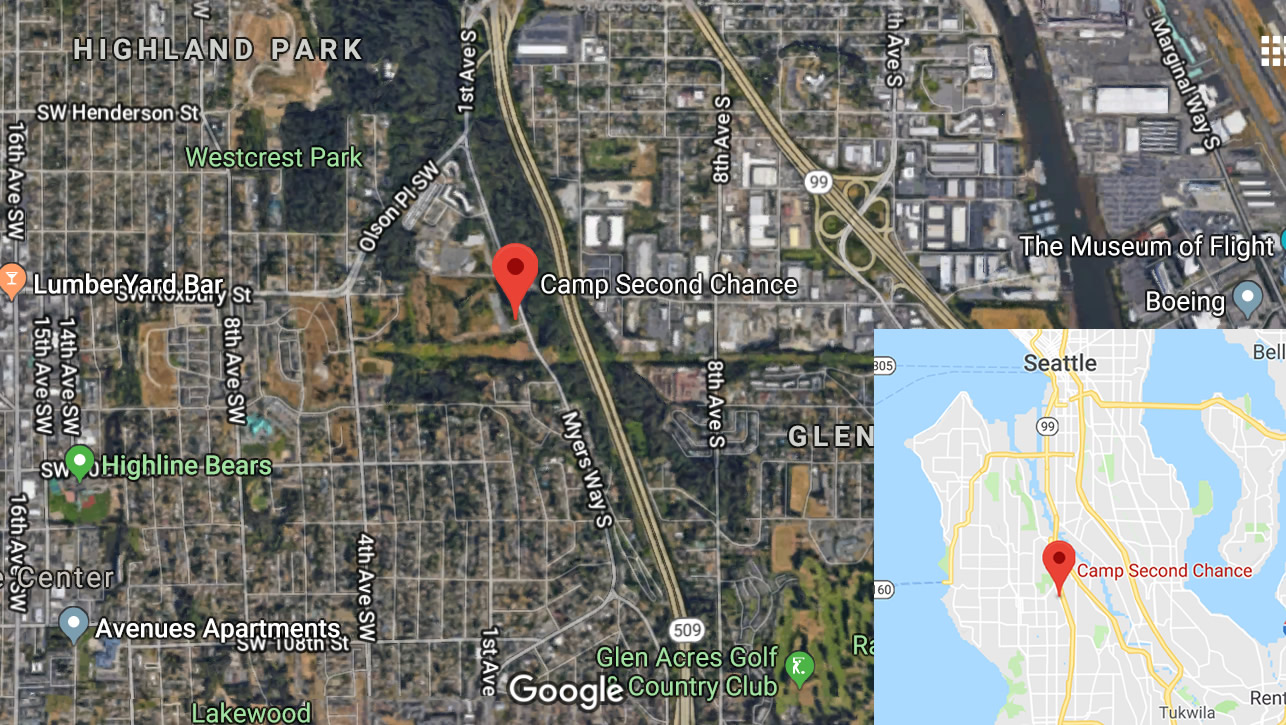 The City of Seattle decided not to evict the campers, and, after being there for a few months, the camp leaders decided they would apply for city funding to pay for services like trash removal, port-a-potty service, and electricity. In other words, they wanted to be a “sanctioned” camp and have a contract with Seattle to run homeless camps, like the ones SHARE had around the city. All sanctioned homeless camps require a sponsor, which can either be a church or a 501(c)3. In early 2017, a Buddhist group called Patacara, whose director, Polly Trout, had participated in the initial occupation of the land, received a contract from Seattle’s Human Services Department (HSD) to run Camp Second Chance; however, Patacara’s sponsorship of the camp ended a few months later, when camp leader Eric Davis accused Trout of financial mismanagement. The contract to run the camp was then transferred to SHARE* and its partner, the Low Income Housing Institute (LIHI). At the point SHARE/LIHI became, once again, the City’s sole contractor for running sanctioned homeless camps.

According to the terms of the City’s master encampments contract, a sanctioned homeless camp can stay in a given location for a maximum of two years, and the contract has to be renewed after the first year. The annual renewal for Second Chance came up in March of 2018 and was quietly granted by HSD. On June 8, 2018, a neighborhood group, the Highland Park Action Committee (HPAC), wrote a letter to HSD interim director Jason Johnson saying it was disappointed about the renewal and noting that since the camp had already been at that spot (illegally) for several months when it was first permitted, another renewal full renewal would mean that the camp will have actually been there for well over two years by the time the contract expires. 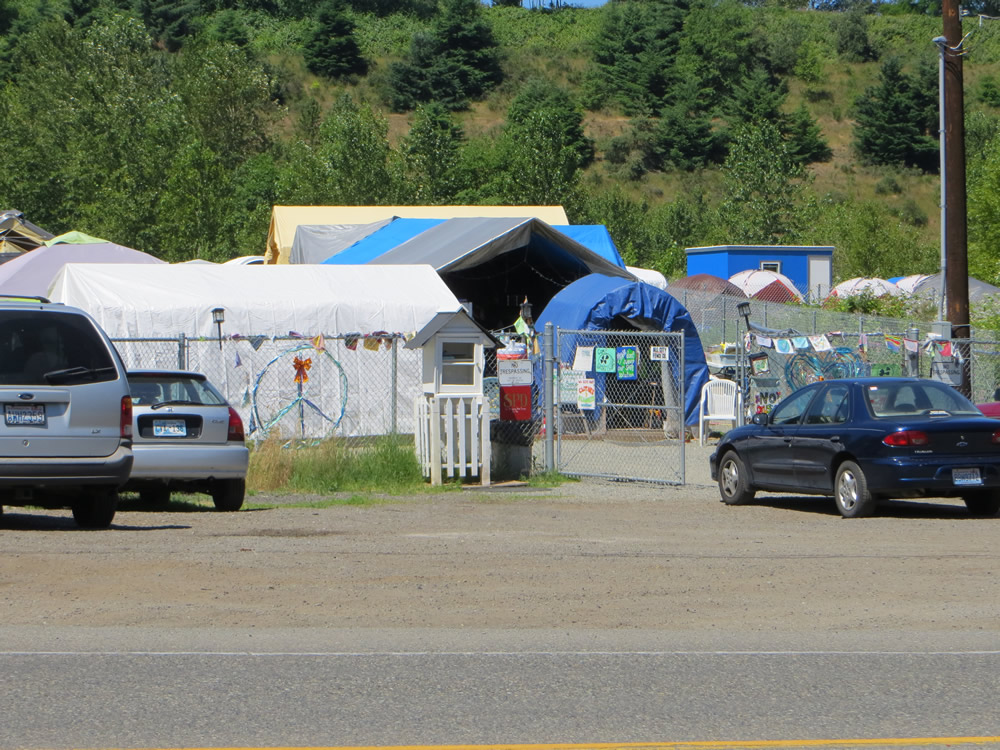 The entrance to Camp Second Chance in 2017. Photo by David Preston

The letter implies that Camp Second Chance management and HSD have failed to live up to their commitment to the neighborhood and urges the City to implement HPAC’s “Suggested Neighborhood Protocols for Sanctioned Encampments” which the group says it had already sent to the City several times. The protocols, which are attached as an appendix in the letter (see below), include such requests as: (a) assign a single contact person at the City to respond to neighborhood issues with the camp, (b) provide a timeline and plan for removing illegal camps and RVs nearby, and (c) give local community groups representation on the “advisory councils” that supposedly oversee the camps. The group implies that crime around the camp is a growing problem and says that more police are needed to address it.

But the gist of HPAC’s plea is that the community around the camp is already disadvantaged and it is therefore unfair for the city to impose any additional burdens on it:

Like most Seattleites, residents of our neighborhoods are compassionate and wish to address the homelessness crisis with empathy. However, in as much as the City claims to promote equity, we ask that neighborhoods like ours not continue to be overwhelmed with the responsibility of shouldering the burden of the City’s homelessness policies while wealthier, less diverse neighborhoods remain largely unscathed.

The document is six pages. You can page through it using the up and down arrows that appear when you mouse over the image. 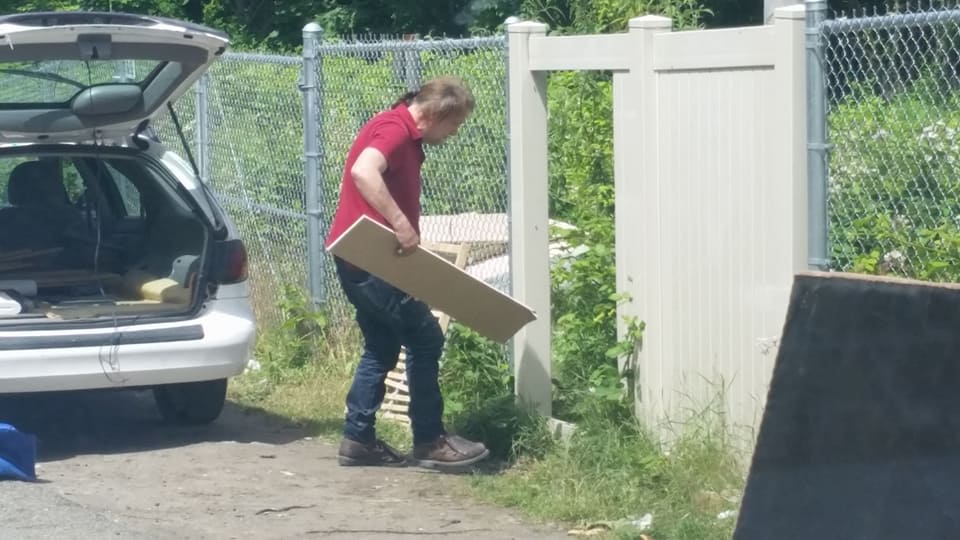 A squatter delivers building supplies to the greenbelt across the road from Camp Second Chance. Squatters are an ongoing problem in the neighborhoods around Seattle’s sanctioned homeless camps. Photo by Pamela Staeheli

Despite the many problems evident with the sanctioned homeless camp approach, the City of Seattle is determined to expand the program. It started three years ago with a single camp. Now there are eight, besides Second Chance. With two more in planning.

The camps share a number of common characteristics and patterns:

► They often appear in a neighborhood with little to no notice to the people living there. In some cases, like Camp Second Chance, they are created illegally and then approved retroactively by the City. They’re plagued by infighting and rebellions, which sometimes leads to the creation of new “breakaway camps” that are unsanctioned and completely out of the City’s control.

► The camps create problems for the neighborhoods in which they’re placed, problems like squatters, RV campers, and panhandling. The camp operator claims that since it’s not their residents causing problems, they bear no responsibility. For its part the City accepts the operator’s argument and treats the increased squalor as part of the general problem of homelessness in Seattle. They don’t provide the affected neighborhoods with any additional police services or trash pick-up. And they don’t remove the squatters.

► Regardless of their performance or neighbor feedback, the camps always get their permits extended for a second year, but despite that, they typically overstay their maximum permitted time of two years. The operators claim that it’s on the City to find them another place when their time at one location is up. Otherwise, they say, they’re not obligated to leave, contract or no contract.

► They are all run jointly by two organizations (SHARE and the LIHI) that have powerful friends at City Hall. Despite the optimistic claims made for them on the City’s web page, support services offered residents at the camps are minimal to non-existent. The camps have all failed to demonstrate that they have a higher rate of placing homeless people in permanent housing than evidence-based indoor housing programs like the Lutheran Compass Center and Mary’s Place.

► These camps cost Seattle taxpayers a lot of money ($700K per year for one camp, according to one estimate from the City) yet the most people any camp holds is a few dozen. All the camps together don’t make a dent in Seattle’s estimated total of 4500 (and growing) unsheltered people. 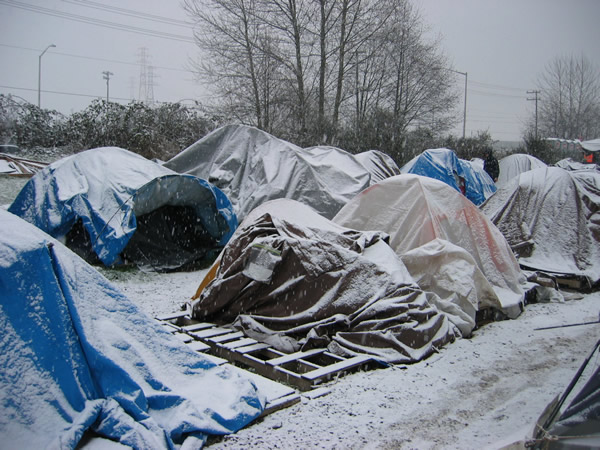 “Nickelsville” ~The same group that now runs Camp Second Chance ran a tent camp in Highland Park from the winter of 2011 to the fall of 2013. That camp was the subject of numerous public health complaints, and when it was finally evicted, it left a huge mess for the City to clean up. Photo by Kevin McClintic

I know the story of Second Chance because I live in this neighborhood and I have worked with the Highland Park Action Committee to keep SHARE/LIHI and the City from turning this struggling neighborhood into a permanent homeless camp. Everything the group says in their letter to Human Services is true: since 2011, we have been the site of a more-or-less continuous homeless camp, complete with all the attendant problems, but with none of the added support we need to address those problems. If nothing else, this is an equity issue. It’s not equitable for one neighborhood to make all the sacrifices while receiving no benefits in return.

In their letter to the City, the Highland Park Action Committee asked to meet with HSD Director Jason Johnson and Mayor Jenny Durkan. The group tells me that both have agreed to be at their September 26 meeting. Camp Second Chance’s contract expires in March of 2019. When that date rolls around, the City should do the right thing and either close the camp permanently or move it to another spot far away from this part of Seattle. In the meantime, the City should do the right thing and work with the neighborhood on their concerns. Squatters across the road from Camp Second Chance should be removed immediately, and police patrols in the area increased.

*Recall that SHARE was the group the original Second Chance campers said they were trying to get away from. Since it was first awarded a contract to operate a homeless camp in 2015, SHARE has been steadily expanding the number of sanctioned camps it manages for pay around Seattle. A thorough investigation would likely reveal that SHARE was involved with the creation of Camp Second Chance and that City employees had told the original campers that they wouldn’t be evicted if they occupied the land.

**From December 2011 to September of 2013, SHARE ran another homeless camp called Nickelsville just down the hill from Second Chance. When that camp was finally evicted by the City, it left a huge mess for the taxpayers to clean up. As the HPAC letter also points out, Highland Park has been the “staging area” for RV campers and there is a large squatter encampment just across the road from Camp Second Chance. 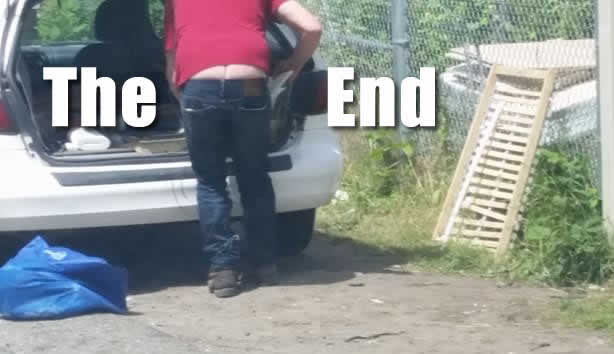 1 Response to Letter from the ‘hood: No more homeless camps here, please!