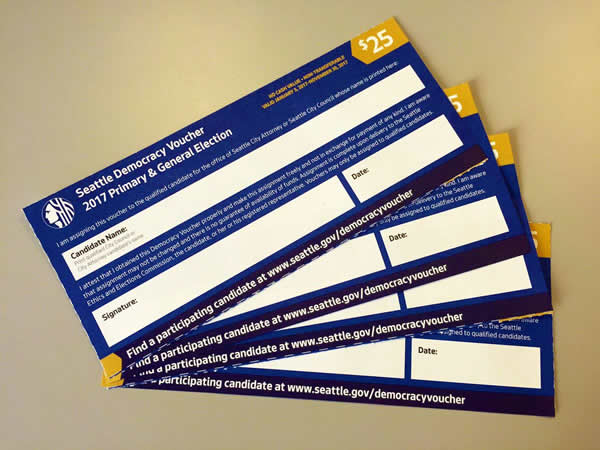 May 14, 2017 ~ In 2015, Seattle voters passed an initiative to create a public-finance pool for candidates in city elections. It’s called the Democracy Voucher Program, and it’s funded by a special property tax. Registered voters receive four $25 coupons in the mail, which they can distribute in any combination to various candidates for city office, who can then use them to finance their campaigns, provided they meet certain qualifications. The Voucher Program, which is in its first year in the 2017 races, is run by the Seattle Ethics and Elections Commission.

James Passey was running for a city council seat this year, but he recently withdrew, citing the Voucher Program as one of the reasons. When I asked him how the Program had factored into his decision to quit, here’s what he said:

The amount of rules from the Fair and Honest Elections / I-122 [the name for the initiative that established the program] are enough to discourage anyone with a regular full-time job from running for office, even if they have experience and motivation and vision. It didn’t fix the issue it was supposed to fix, according to what was stated in the ballot initiative. It was supposed to get big money and influence out of local politics. Instead, it has become a conduit for big money and influence to come in, take advantage of a system meant for true grassroots movements, and spend taxpayer money to finance campaigns. You must have lots of resources (people and money) to participate in the Democracy Voucher Program. Collecting 400 signatures and a minimum of $10 per signer isn’t easy and can’t be done part-time or even full-time. You need a well-organized campaign to pull this off.

Quoting from a blog post on I-122: “Backers of the initiative said it would bring more diversity to the city’s pool of candidates, giving those without access to big-money donors the ability to compete. Proponents also argued the measure would encourage candidates to spend more time listening to ordinary citizens’ concerns.”

–That is absolutely false. Our campaign spent the majority of our time trying to explain the program to ordinary citizens while hustling them for $10 and a signature. As a candidate, I was trying to juggle payments, signatures, making sure people follow the rules otherwise their signature and $10 minimum contribution doesn’t count, you name it. The program comes with very strict rules and guidelines that must be followed. I’d say more than 85% of my time was spent on the overhead of this program, and 15% of my time listening to people about concerns of the City.

The SEEC has been helpful and admittedly overwhelmed by the whole process. First they said all signatures were due June 2. A few weeks ago, that was retracted; apparently, you only have to opt in to the program by June 2. (This was discovered after they re-interpreted the language of the initiative.) It’s still unclear as to when the 400 signatures are due. But the Vouchers are only valid until December 1, I believe, so I presume you must have all signatures by then.

This June 2 deadline created a huge rush with multiple campaigns. You saw it all over event ads on Facebook and elsewhere: campaigns pushing and pleading for people to sign their “permission slip” (and give $10) for access to Democracy Vouchers, only to be told “Oh, never mind, you have longer than June 2!”

It’s just bizarre. After that announcement came out late-April, I knew this program was seriously flawed. How could they not know this deadline was artificial at such a late point? How many campaigns did they discourage from participating or continuing because of this deadline?

The best part? Once you opt in to the Democracy Voucher Program, you cannot opt out. I asked. I was told the only way out after signing the pledge was to violate one of the rules. Basically, you had to violate campaign finance or elections/ethics laws to get out of the program if you decided it wasn’t for you.

And all those vouchers people sent to me? Invalid. Once you assign to a candidate, even if the candidate never qualifies for the program because they can’t get enough signatures, it’s assigned to them. You can’t get it back. We were encouraged by SEEC to “immediately return Democracy Vouchers” as soon as they were assigned to our campaign, even if we weren’t even close to being near the signature requirement. I turned in thousands of dollars of vouchers that are now invalid. I’ll be directing voucher holders to the SEEC if they are angry that their vouchers can’t be used.

But most people shredded their vouchers because they thought it was junk mail.

Campaigns have special Voucher Replacement Forms. You can have a resident sign over all four (not one, not two, not three – it must be all four) to a candidate if the person lost their vouchers or threw them out. This form came with all sorts of other crazy rules.

I want to acknowledge that SEEC was helpful to me. But they were simply not prepared. The initiative is flawed. They were handed a messy job and had to do it.

Want to voice your concerns about this program? Contact the SEEC Executive Director Wayne Barnett, 206-684-8577 or Wayne.Barnett@seattle.gov.