Oh the irony! Seems that one of the ACLU’s two homeless plaintiffs – a woman who is crying foul over City crews removing her stuff from public land without due notice – is apparently quite the little thief herself. According to court records, Brandie Osborne has broken into people’s homes to steal their things. And she didn’t even given them the same 72-hour notice that she’s demanding of the City. Nor did she store the things she’d stolen so the rightful owners could later claim them.

Below is a picture of Ms. Osborne “speaking out” against the City’s plan to clear out “the Jungle” in the summer of 2016. Before moving ahead with that plan, the City teamed up with Union Gospel Mission to visit every illegal camp site and offer the residents a warm, indoors place to stay, along with adequate food and case management services. Many people accepted the offer. But not Ms. Osborne. It appears that she and the ACLU already had a plan of their own. 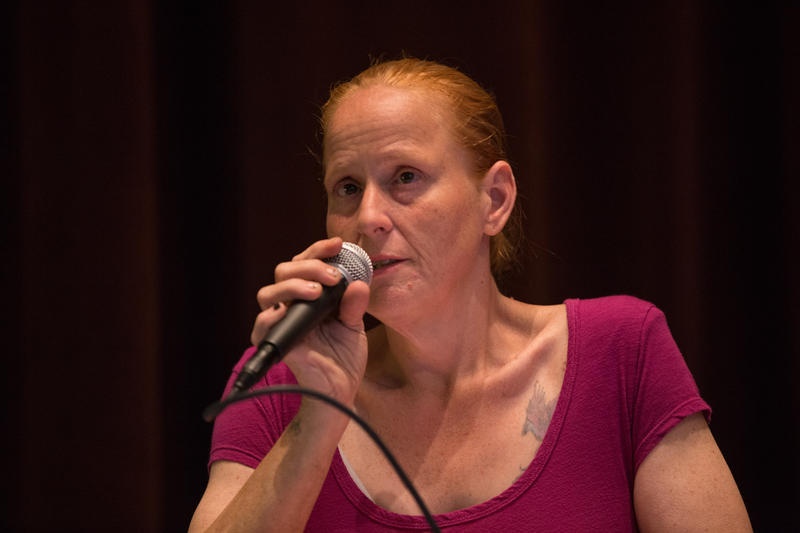 Jungle resident Brandie Osborne speaks out against Seattle’s plan to clear the area of illegal homeless encampments. Click to listen to the KUOW radio program about this.

At the time of the KUOW interview, Ms. Osborne was already well known to the police. Here’s an arrest record for her from May 30, 2014. At the time, Osborne was staying in SHARE’s Tent City 4 on the grounds of Temple B’nai Torah in the Seattle exurb of Bellevue. According to the police report, a Bellevue police officer noticed Osborne and another person on the property of a closed business just before midnight and when he stopped the two and ran a records check, Osborne’s name came up with an outstanding warrant for residential burglary, so she was arrested. The document is six pages; use arrows at bottom to navigate:

During questioning, Osborne was evasive, giving a series of false identities and lying to the arresting officer about her ID:

The female verbally identified herself as Brandi P. Shaw and stated she had no ID on her person. [Her companion] came back [with no warrants] out of Montana while Shaw came back with no computer record found. I asked Brandie again for her information and she now changed her middle name to L from P and state she wasn’t being serious before. Another records check was completed. Again no computer record was found. Eventually, I tried her maiden name of Osborne and completed another records check. This time the records check revealed that Osborne had a Felony Burglary warrant out for her arrest from [the King County Sheriff’s Office] for $15,000.00. [ . . . ] Upon searching Osborne incident to arrest, I located her Washington State ID card in her wallet.

Note the term Bellevue police officer Tarantino uses to describe Osborne and her accomplice: “hostile.” According to him, Osborne said that the city of Bellevue and the Bellevue police were harassing her and the management of Tent City:

The two also stated that they were being harassed and that they are new to the area and live at Tent City four. The female stated she helps run Tent City four [see the Brandie Osborne Timeline in the postscript] and complained about the city of Bellevue and about the police department. The female stated that the city did not like TC four and had forced the camp to put unnecessary rules in place.*

This hostility and blaming of others appears to be a theme of Ms. Osborne’s.

Dialing back six weeks, Osborne had another incident with police, with the King County Sheriff’s Office to be exact. In that incident, she and a companion were found shortly before midnight, sleeping outside a Sammamish business. When the officer asked her what she was doing there, she replied that she had been living at Tent City 4 but had been banned from there for seven days. At that time, Tent City 4 was at Lake Sammamish State Park. The document is three pages:

Note that in this earlier incident there were not one but two outstanding warrants: one for Snohomish County (“SCSO”) on a charge of Theft 2 and the other one we already knew about, for Residential Burglary. Note also that Ms. Osborne’s companion, one Jeffrey Scott Towle, gives his occupation as “resident coordinator” at Tent City. The report doesn’t say anything about him being banned from Tent City, however, so perhaps he was sleeping on the sidewalk with Ms. Osborne in solidarity.

Below are the court documents on the December 2012 burglary charge, to which Ms. Osborne pleaded guilty. On page 19 we see that Osborne received a 4.5-month sentence, which she was to serve under work release. There were several “conditions of conduct” attached to the work-release sentence, and we may infer that bench warrant Osborne earned derived from her violating one or more of those conditions. This document is 20 pages:

We learn several other interesting things from this document as well, including that:

► Osborne may have planned the burglary using information provided to her by a friend (see statement of Deborah Colley, page 5).

► Osborne was being sought for questioning in regard to several burglaries that occurred in the area at the time. Osborne agreed to contact Detective O’Bryant, but she never called him back (see page 5, second paragraph).

► Osborne was living at SHARE’s Tent City 4 homeless camp, which was in Redmond, Washington at that time Detective O’Bryant was trying to talk to her.

► Osborne had an earlier felony theft conviction in 2011 (see page 2) for which she served 20 days in jail (see page 18). This conviction was in Snohomish County, and it is likely the source of the Snohomish County arrest warrant that is referred to elsewhere in the documents. 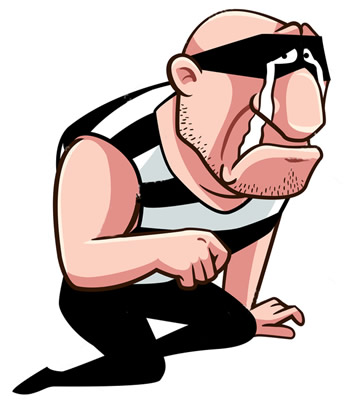 What we see with Ms. Osborne is a long-term pattern of stealing, lying, and generally evading responsibility for her actions. Just 21 months had elapsed between Osborne’s last theft-related arrest (in May of 2014) and February of 2016, when she claims, in the ACLU suit, that the City of Seattle was unfairly taking her stuff from a public space: 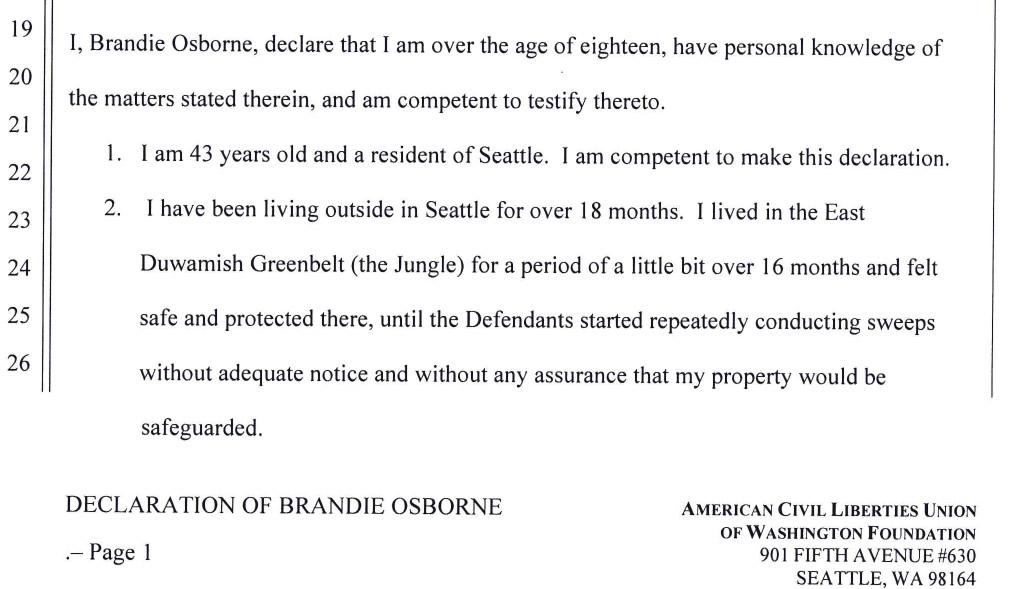 Let’s weigh the truth of her statements. She claims she’s been living “outside in Seattle” for 18 months. That statement is misleading. While she might have been living outside in Seattle for just 18 months, according to court documents we have here (see the timeline in the postscript) she’s been living outside around Seattle, in various tent cities, at least since August of 2011. Which puts her closer to six years of living outside in total. And it’s possible she’s been drifting around for much longer than that. Given the fact that she turned down UGM’s offer of help to get her out of the Jungle, one has to ask: Does this person really want to live indoors?

And what’s with this list of stuff she claims to have owned while “living outdoors” in the Jungle: 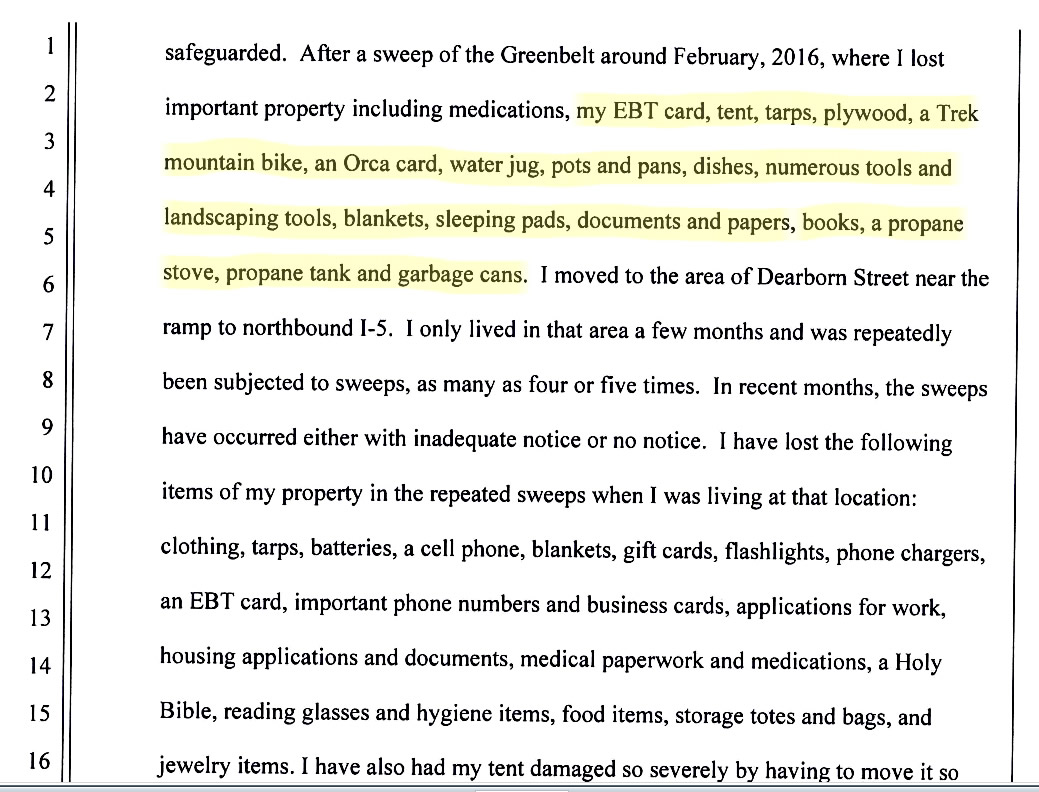 Plywood? Landscaping tools? Garbage cans? How long was she planning on being there, exactly? If you read through the documents on the ACLU’s court case, you’ll see that the main plaintiffs, Ms. Osborne and Ms. Lisa Hooper, repeatedly refer to the spot where they’re living (on public land) as their “house” or their “home.” Perhaps the ACLU coached them to say that in their declarations. Or maybe they really do think of the Jungle as their home. In any case, it’s telling.

One also has to wonder about the veracity of Osborne’s claim to have lost her ORCA (regional bus service) card and her EBT cards in the sweeps. Those things are as good as cash among homeless people, and Ms. Osborne would certainly have known that. So why wasn’t she carrying them on her person? City officials and other insiders know that EBT cards are often sold fraudulently and then reported as missing. Confidential informants who lived in sanctioned tent camps have told me that the managers of these camps advise them about stores where they can “cash out” their EBT cards for 50 cents on the dollar.

On reviewing Ms. Osborne’s long rap sheet and other information we have on her, it’s clear to us that she isn’t the victim the ACLU wants us to see her as. If anything, she’s the one who victimizes others. One might have hoped that with all the resources at their disposal, the ACLU could have done a better job of locating a poster child for their cause. But who knows, maybe they really did sniff around in the Jungle. And she was the best they could find.

By David Preston and Karen Morris

This sheds some additional light on both Ms. Osborne’s character and on the way SHARE’s tent encampments are run (two pages):

* The “unnecessary rules” that Bellevue forced SHARE and Tent City 4 to put in place included prohibiting SHARE from evicting campers for calling 911 or talking directly to their church hosts without permission from camp management.