The Ballard Bridge spans Salmon Bay to connect Seattle’s historic Ballard neighborhood with points south. The bridge and surrounding environs have been a long-term site of homeless camps at both ends. These camps, particularly the one on the north end, have been the cause of much strife between local residents and Seattle Councilmember Mike O’Brien who represents the Ballard area. O’Brien has taken a hands-off approach to the camps, and this has filtered down to Seattle police, who have repeatedly told residents that there’s nothing they can do, that their “hands are tied.” In recent months, Ballard residents have taken to social media with their complaints, using the Safe Seattle Facebook page* to post dozens of still shots, videos, and personal stories illustrating the danger the bridge situation poses to the community. The posts are then shared around on the Internet – along with CM O’Brien’s contact information. 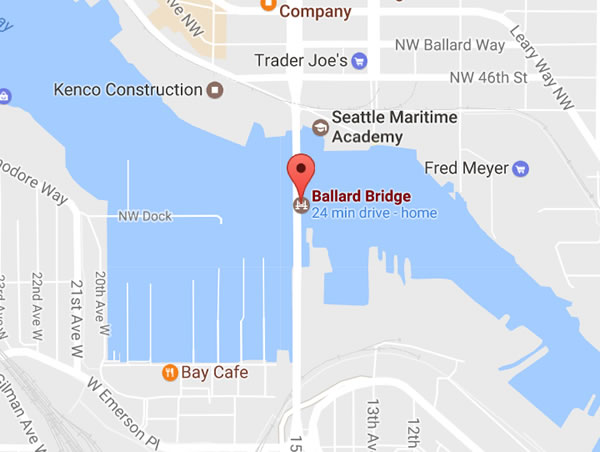 The social media blitz seems to be paying off, but there’s still a long way to go. In the past week, the north end of the bridge and vicinity has been subject to a major clean-up effort, but there is a challenge, because often, as soon as crews move homeless campers out of one area, they will resettle in the closest available space. This is the result of the fact that, while City officials are required to offer various kinds of services (including, naturally, shelter) to homeless campers, the campers are not required to accept them. Meanwhile, there’s no sanction if the campers don’t accept them. Their tents and possessions can be removed after sufficient notice has been given, but they cannot be arrested for vagrancy, littering, public intoxication, and so forth, because CM O’Brien, with support from the ACLU, has determined that camping in public is a Constitutional right – if campers have nowhere else to go. Or even if they simply don’t want to go anywhere else.

A Safe Seattle reader who wants to stay anonymous sent the following photos yesterday, along with the attached descriptions of what has been happening at the bridge lately. You can click to enlarge any of the photos. –David Preston 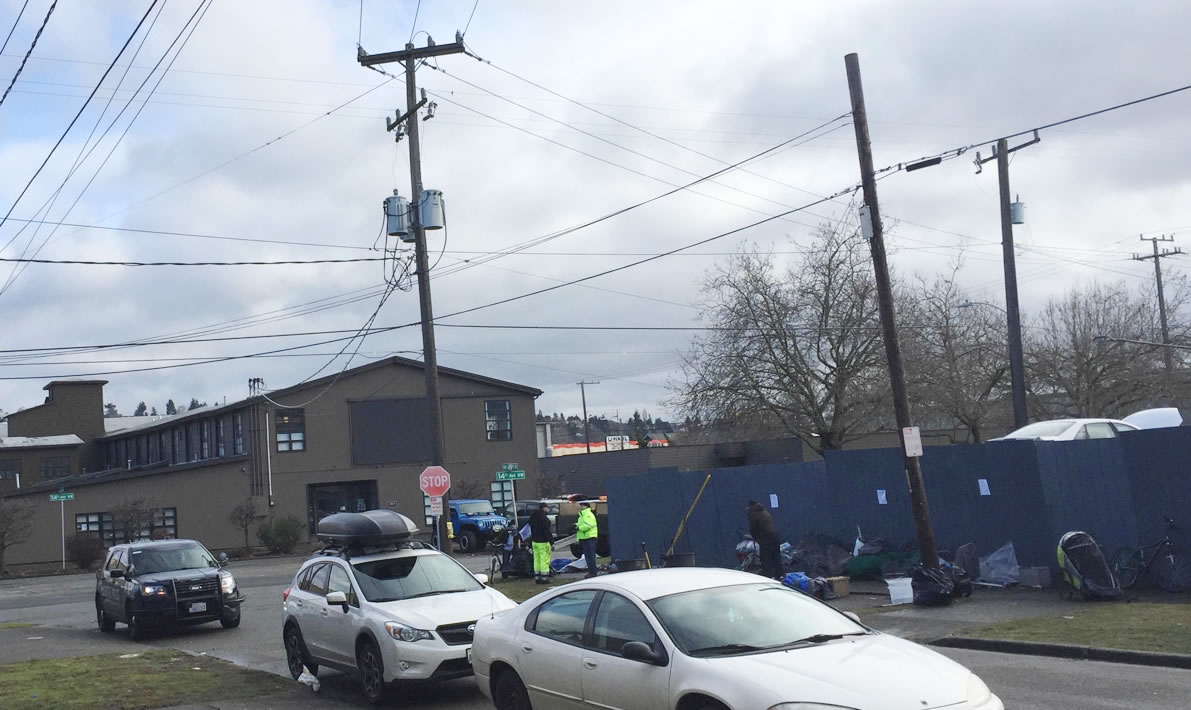 Above: Two SPD community police team officers in vehicle, monitoring clean-up of encampment at 49th and 14th NW, around 1 pm, Tuesday, Jan 10. This is after two large pick-up loads of material had been removed and several large shelters dismantled. Many bikes, parts, etc. Two workers were helping inhabitants move material. 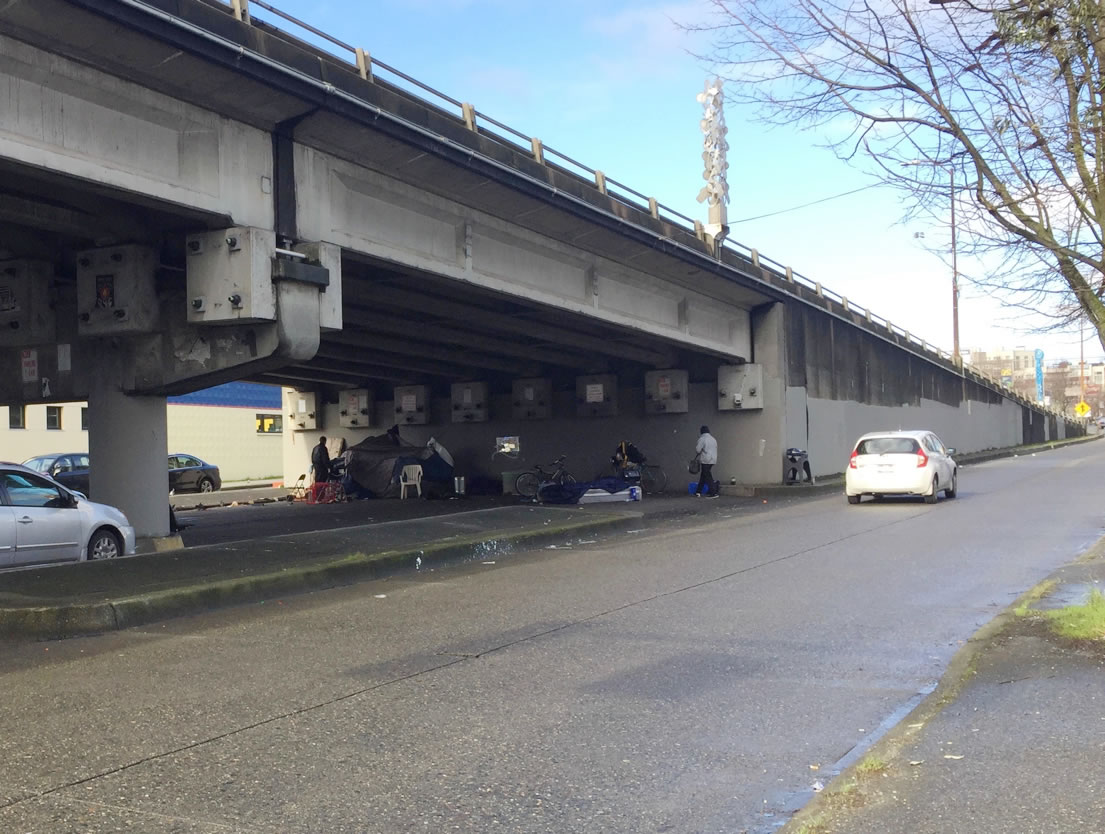 Some of the inhabitants were moving material around the corner and re-settling under the Ballard Bridge, just above Leary Way. This area was fully cleaned last week, by numerous clean-up workers and SPD (At what cost? Is anyone tracking site-specific budgets and neighborhood impacts?) It was resettled within less than 24 hours and is seeing additional activity today. 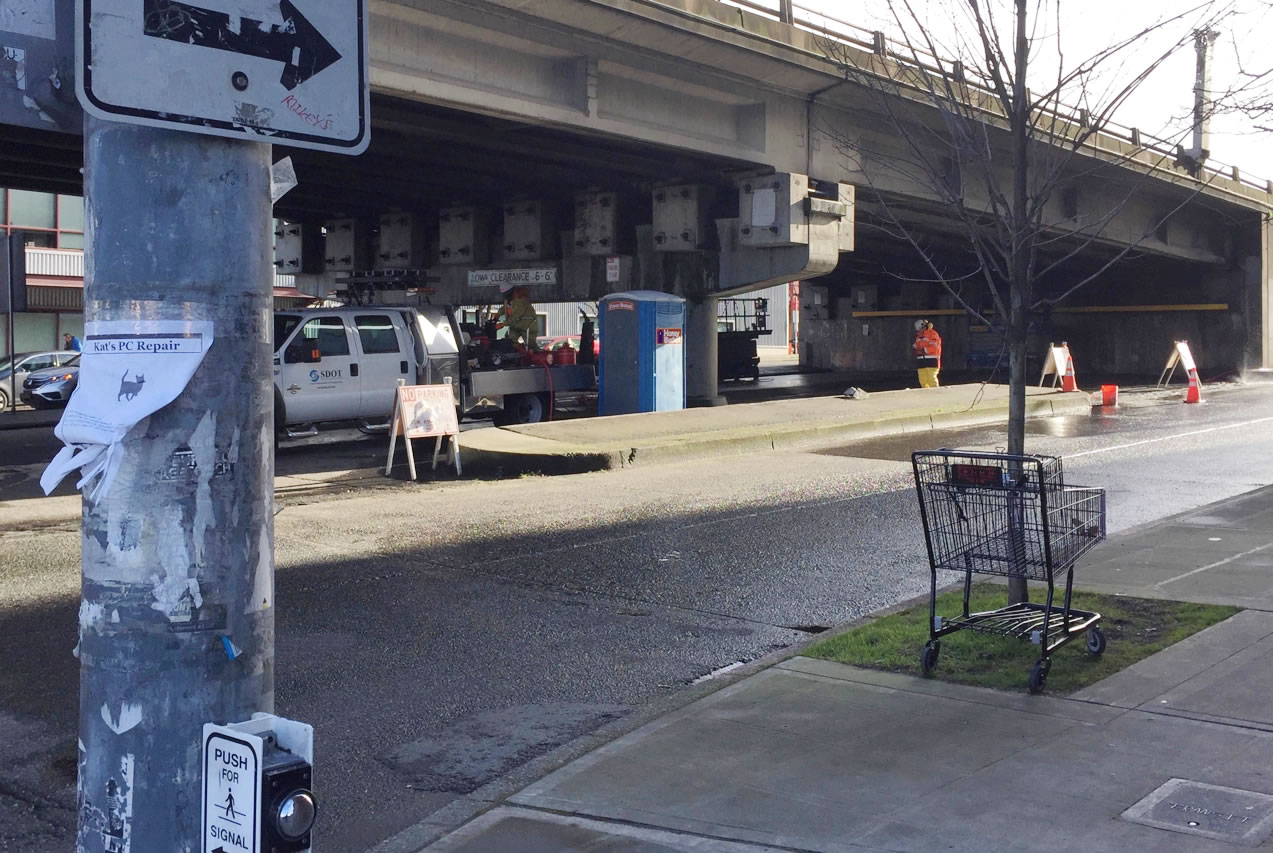 At 1 pm, Tuesday, January 10, SDOT crews were hard at work cleaning the area under the south side of the bridge at Leary Way, where a large encampment fire happened last month. This is the second day crews were at work there, as well as previous clean-up stints immediately after the fire. When I thanked him as I passed by, one of the SDOT crew cheerfully told me it’s great work, except when the weather’s really cold. His face was completely black with wet soot/mud from power-washing, and he was smiling. Impressive. The portable toilet is a fairly new appearance. There is also a new one on the sidewalk in front of Stone Way Hardware. (Thank you, Mike O’Brien?!) 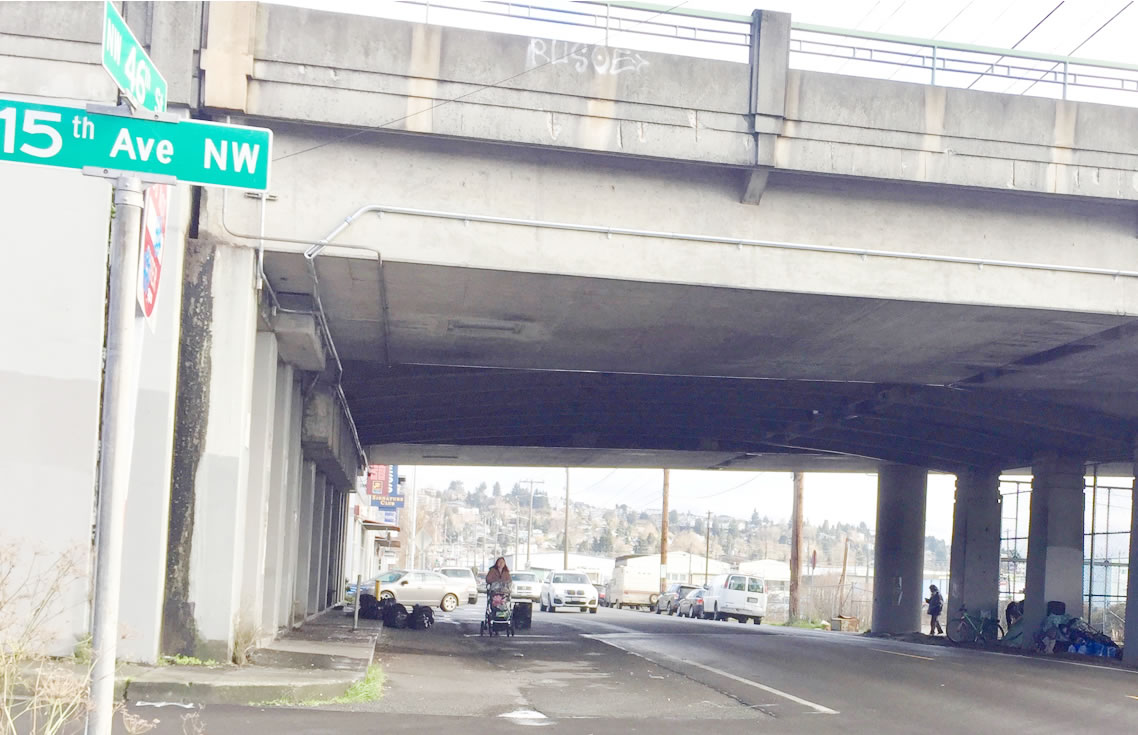 This is the area one block south under the Ballard Bridge at NW 46th St and 15th Ave NW, right by Trader Joe’s and LA Fitness. Note the mom with baby in stroller passing underneath. It is a route needed by pedestrians for reaching neighborhood amenities, with heavy vehicle traffic passing under the bridge, as well. The pile of gleaming trash bags just to the left of the stroller were freshly unloaded by men who appeared to have just left the encampment being cleared at 14th and 49th. I jogged back and told the CPT police team there that the sidewalk was again being impeded on both sides of this route. This area was fully cleared just a week ago but is already becoming impassable. This is the same intersection where a woman’s body was found dumped in a shopping cart in November 2015. Drug use/dealing and crime are a big problem still, with little enforcement.