Since Donald Trump’s 2016 presidential campaign pulled ahead of the GOP pack last month, critics to his left and right have been increasingly calling him a fascist. As evidence of this claim they cite footage of protesters – usually minorities – being manhandled and even assaulted as they are removed from Trump rallies. [See here for example.] Sometimes the scenes will be mixed with clips of Trump at the podium, ridiculing the protesters or encouraging his supporters to rough them up. 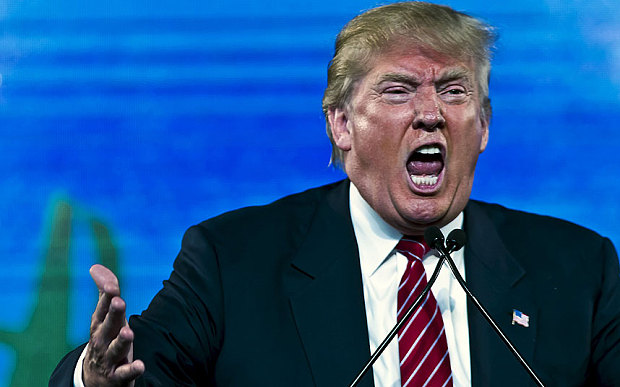 Is this fascist behavior? Well, kind of . . . but not really. At least, not in the historical sense of fascism. Yes, beating people up is something fascists do, but real fascists have gangs of roving thugs, and those thugs don’t wait for protesters to come to their rallies to start roughing people up. They actually go out on the streets looking for victims. Also, when you get beaten up by fascists, you get messed up pretty bad. Or killed. And that is not something we see happening at Trump events.

When people get tossed out of Trump rallies, they’re not getting tossed because they’re Mexican, or Muslim, or whatever. They’re getting tossed because they’re heckling the speaker, or are engaging in some behavior that is clearly rude and disruptive. While Trump doesn’t have the right to tell his fans to beat people up, he does have the right to ask disruptive people to leave, just as surely as a bar keeper has the right to bounce drunks.

I have a theory that some hecklers go to Trump rallies in the expectation of getting kicked out and then posting videos of the episode on the Internet in order to show that Trump is a bully and a racist. There’s no way for me to prove my theory at this point, but it is possible to prove the concept. To do that, I posed as a “social justice” film maker, went on Craigslist, and posted a “gig offered” ad in three cities: Seattle, Houston, and Detroit. The ad says I’m looking for people who are willing to make a fuss and get kicked out of Trump rally in exchange for a $100 stipend. Here’s what the Houston one looked like  . . . 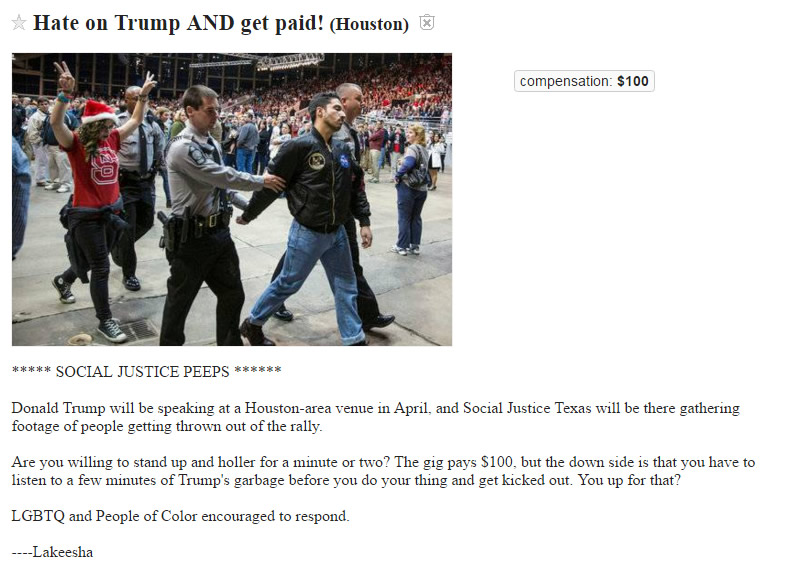 I had no trouble finding takers. Within an hour or two of posting each ad, I had collected several positive responses. Here’s a typical sample of the responses:

What does my little experiment prove? Does it prove that the animosity toward Trump is phony? No, the animosity is real enough. What the experiment proves is merely that there are people out there who are willing – for a little money – to go to a Trump rally, stir up a ruckus, and get kicked out, with the understood objective of making Candidate Trump look bad. Given that there are people this many people willing to do it for pay, is it that far-fetched to imagine that here are at least a few willing to do it for free?

Of the two dozen responses I got before I took the ads down, only one was negative. That was a from a gentleman in Houston who scolded me – or rather, scolded the person he thought I was – for trampling on people’s rights. He flagged my ad and Craigslist took it down.

For a related story on political manipulation, see my Outrage on Demand piece.

5 Responses to Outrage for Hire