Othello Village: How a homeless camp came to one Seattle neighborhood

Seattle officials recently hosted two community meetings in the city’s Othello neighborhood to discuss their plans for citing e a homeless encampment in neighborhood. The camp has been dubbed “Othello Village” and will be located in 7500 block of MLK Way S. (See Google Map view here.) Organizers say Othello Village will host up to 100 people in tents and “tiny houses” and will be there for 12 months, with the option to reapply for another 12 at the end of that term. Families with children will be allowed, but accommodations will be rudimentary. The camp will have portable toilets, for instance, but no running water, and electricity will be supplied intermittently by generators.

Othello Village is being sponsored by the Low Income Housing Institute (LIHI) – a non-profit group that owns the property – and will be managed the Seattle Housing Resource Effort (SHARE). LIHI and SHARE jointly manage two other encampments in Seattle. The City of Seattle has signed contracts with the two organizations and will be providing most of the operational funding. 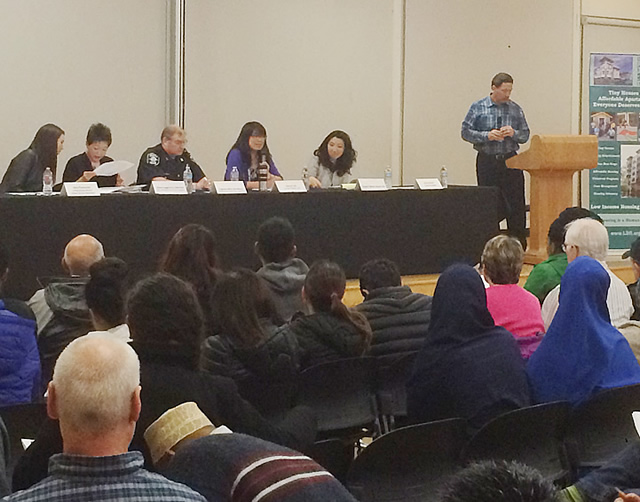 The community meetings were held at the New Holly Community Center on February 16 and March 3. Both were in the form of panel presentations. Officials on the panel included Deputy Mayor Hyeok Kim, Councilmember Bruce Harrell, and Sharon Lee, CEO of LIHI. Also there were representatives from the Department of Planning and Development and the Seattle Police. Scott Morrow of SHARE was also in the room to field questions the other members couldn’t answer. (Note: Morrow was removed from his position at another Seattle encampment last month. More info on that story here.)

Both meetings were well attended and included a number of people for and against the camp although, according to neighbors I spoke with, there more people against. Small business owners were particularly worried about the effect a homeless camp would have on the neighborhood, they claimed. 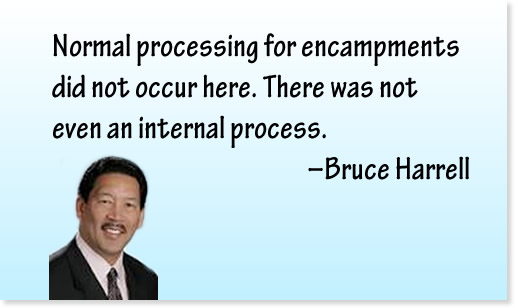 Pete Mahowald lives two blocks away from the encampment site and was in attendance both nights. He described himself as a neighborhood volunteer and sometime spokesperson. Mahowald is unhappy about the sudden way in which he and other neighbors heard about a homeless camp moving in. He told me that construction on the site began two days after the first meeting and before the land-use permit had been issued. At my request, Mahowald sent me pictures he’d taken showing several tiny houses that appeared at the encampment within 48 hours of the first meeting. 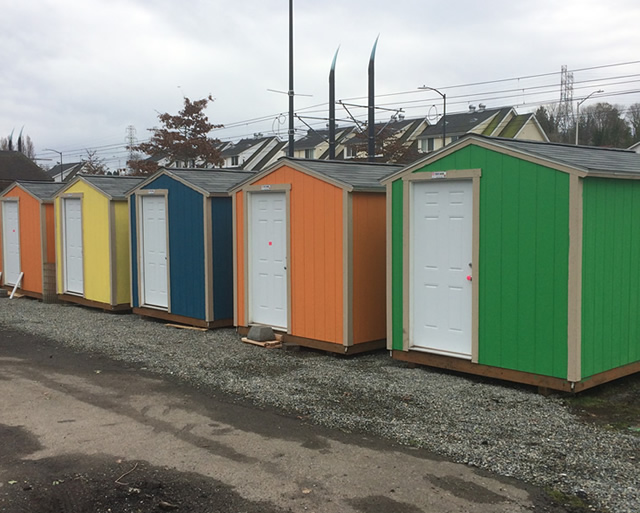 Mahowald was also not pleased with the way the meeting invitations were handled. He said he didn’t get an invitation for either meeting and only heard about them second-hand, despite the fact that at the first meeting he’d put his name on a list to be notified of future events. He brought this up with Councilmember Harrell in the meeting: “Bruce said that e-mails were sent out telling neighbors about the second meeting and when I said I didn’t get one, some 80% of the people in the room clapped. Those people hadn’t gotten a notice either. I know many of them. They’re local business people. Neighborhood volunteers. They found out the same way I did, by word of mouth or someone forwarding an e-mail around.” 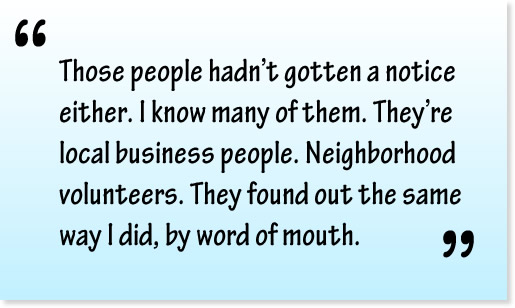 At the first meeting, Mahowald says, he asked whether the camp had already been permitted, and Harrell replied that the permit was still in process and that several things would have to happen before it could be finalized. However, at the start of the second meeting, Harrell announced that Othello Village was a “done deal” and the purpose of the community meeting was to help the City and LIHI address resident concerns going forward. Harrell told the audience that he didn’t have a choice in the matter himself, that he had to push the encampment through because the Mayor had declared a “state of emergency” for homelessness. Harrell was referring to Mayor Ed Murray’s press conference of January 31 in which the Mayor claimed that the city would now have “more administrative authority and flexibility in contracting for services and distributing resources.” How the Mayor’s declaration affects permitting laws remains to be seen. See more here. 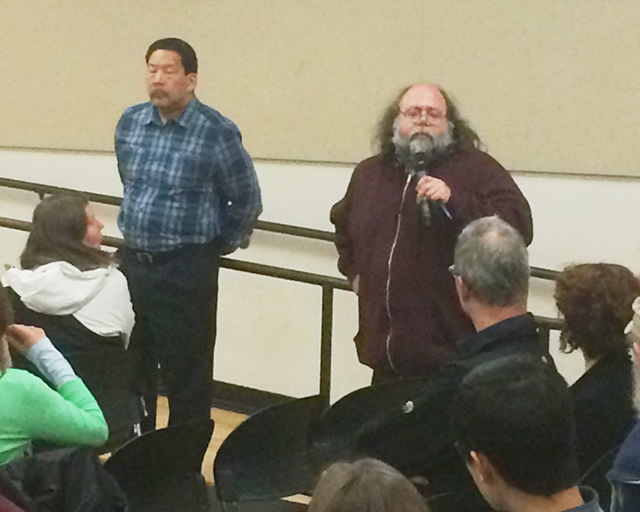 Organizers claim the camp will have rules of behavior for residents (see a sample intake form here), but Mahowald was skeptical. “They say that the people at Othello Village will not be allowed to buy alcohol within a mile of the camp. How are they going to police that? There are liquor outlets all over that area.”

Another neighborhood activist, Gaye Davies, echoed Mahowald’s account of being left out of the loop. Like Mahowald, she had put her name on a contact list after the first meeting but was never given notice of the second one. She said the panelists spoke for too long before taking questions: “We just sat there and listened and listened and listened. For an hour we listened. A few neighbors managed to interrupt with questions, but one of the things we got over and over was that we’re not in this [decision]. We’re not being consulted.”

Davies told me that her concerns are the impact on the “fragile” neighborhood and  the safety of the campers. A former Block Watch captain, Davies has a history of working on crime prevention with neighbors. She gave me examples of crimes that had occurred in the area of Othello Village. “We’ve had deaths in this area,” she said. “We have gun and drug activity. Every few weeks we hear gunfire.” 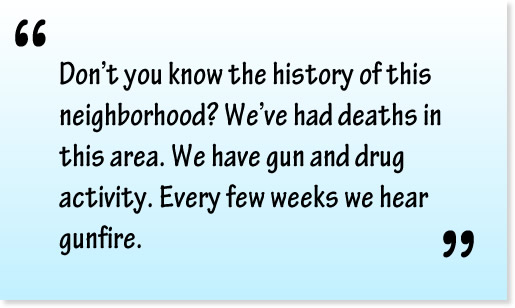 “I keep thinking: Do you people know where you’re putting this? –Right in the middle of a residential area, on the edge of one of the busiest streets in Seattle. Don’t you know the history of this neighborhood? It has improved, yes, but is certainly not a safe location for a vulnerable population.”

Davies has a Master of Public Health degree and she told me that that background informs her concerns about the project. “I keep punching on the public health angle,” she emphasized. “Supposedly they’re going to put in showers and sinks at a nearby mini-mart for the residents. How’s that gonna work? Two showers for a hundred people? The camp will have no hot water. I hate to think of kids in that place, with tents and no water. I have a dog sitting business and the City requirements on me are stricter than this. They tell me I have to have hot water for dogs, but they don’t have to have it for kids?” 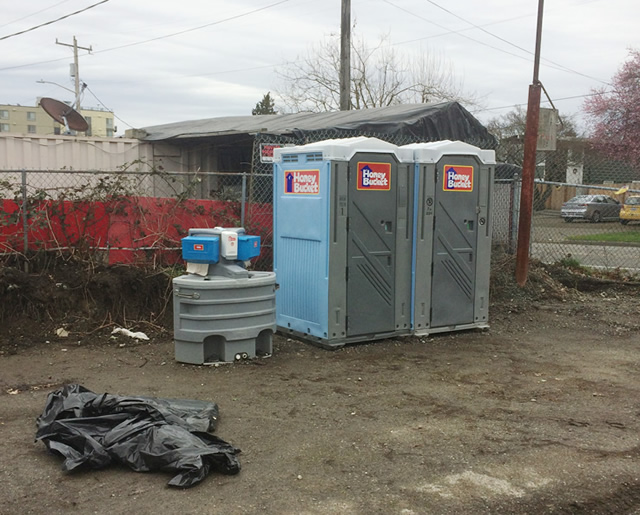 Port-a-potties and a hand washing station will greet the new residents of Othello Village.

At one point, Councilmember Harrell said something so startling Davies felt she had to write it down. She got her note and read it to me. Twice. “He said – and I’m quoting verbatim – ‘Normal processing for encampments did not occur here. There was not even an internal process. It did organically arise.’”

“Now what do you think of that?” she asked. I said the word “organic” made it sound like the camp was something the neighbors were asking for. “Asking for it? We didn’t even know about it, much less ask for it. I would say that at least half of the people at those meetings felt that the Othello neighborhood was being railroaded.”

According to late-breaking news stories, Othello Village will officially open on March 8, five days after the second community meeting.

11 Responses to Othello Village: How a homeless camp came to one Seattle neighborhood