Seattle Councilmember Kshama Sawant won’t respond to my complaints about the treatment of people in homeless camps. She won’t meet with me to discuss creating a streamlined and independent grievance process to protect homeless people living in city-sanctioned camps. And yet she has the nerve to send me invitations to her pep rallies. This latest rally has a theme of ending homelessness and several speakers will be there representing local non-profits. I thought I’d write and bring them up to speed. Below is the text of my e-mail. I’ve linked each name in the “To” line to a Web page showing the person’s affiliation.

I see that you and/or your organizations will be represented at Councilmember Kshama Sawant’s upcoming “People’s Assembly.” The theme of this event will be ending homelessness. 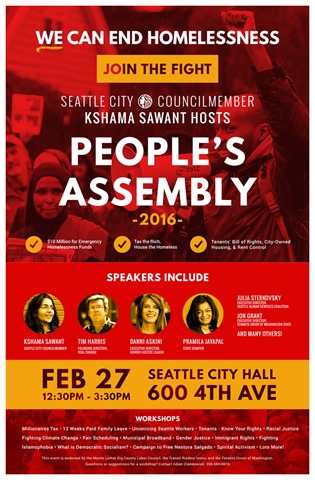 Kshama gets the the big picture on homelessness. But what about the little one? Since last fall, I have been trying to get her help on a problem involving a local non-profit that runs several homeless camps and shelters in Seattle. This outfit runs camps from the top down, and when campers complain about this, or when they have an issue with the camp boss or one of his pals, they get evicted from camp with no right of appeal. There is a pre-eviction grievance process at the camps, but that process is run by the camp boss and his cronies, most of whom don’t even live at the camps they oversee. Recently the Nickelsville homeless camp at Dearborn Street near downtown Seattle voted the camp boss out, whereupon the boss and his allies in the non-profit community stopped services and food donations to the camp and pressed the City to evict the campers en masse. In a letter to the City, the boss’s allies slandered the rebellious campers, claiming they were a band of violent drug addicts and needed to be removed immediately. The leaders’ response shows that this is simply not true. (Read more here: Letter From Camp Dearborn)

What’s happening at Camp Dearborn now is a replay of an uprising that took place at the same camp last year. In that case, the camp boss and his allies bullied the campers into submission after threatening the entire camp with eviction and using smear tactics against the leaders. In the fall, I contacted Kshama and other councilmembers and city officials, asking them to establish a fair and swift grievance process independent of the camp boss and his cronies, so that homeless campers would not be punished simply for exercising their democratic rights. Unfortunately, Kshama did not respond to my appeals. 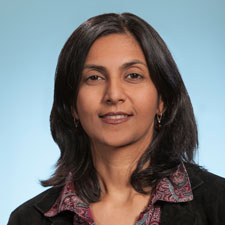 Several weeks later, at one Kshama’s forums, I discovered that the she has a political connection to the camp boss and his non-profits.  Suddenly it became clear to me why she was ignoring my e-mails about these organizations. (Read my story about that connection here: The Friends of Kshama Sawant.) The Low Income Housing Institute (LIHI) is one of the groups that has been represented at Kshama’s forums in the past. Sharon Lee, CEO of LIHI, is one who has cut off vital services to Camp Dearborn and has been urging the City to evict the camp. Ms. Lee makes $176 thousand a year and her organization gets some $5 million annually in grants and rental income. Needless to say, Ms. Lee is not someone who should be threatening homeless people. And she is the last person Kshama should be supporting right now . . .

Intelligent people can disagree about whether Camp Dearborn has a right to stay on the property and for how long. However, while negotiations are ongoing, it is not right that services should be cut off from the camp or that City-funded non-profits should be pressing the City for an eviction. I get why Kshama might be hesitant to go against groups that have been her loyal supporters, but at some point you have to put your political alliances aside and ask: What is the right thing to do here? How can I prevent the greatest amount of harm to the greatest number of people?

Please urge Kshama to intervene and halt the eviction of Camp Dearborn. Ask her to meet with me regarding the creation of an independent grievance board to protect the rights of people living in city-sanctioned homeless camps. Thank you.

If you want to send Ms. Sawant an e-mail, click here: Kshama Sawant