It takes a trash-heap to make a Village

A homeless man rummages through trash in an alley behind Seattle’s newest “sanctioned” homeless camp, Othello Village. The camp is run jointly by Seattle’s Human Services Department and the Low Income Housing Institute, a local non-profit group that oversees two other camps under contract with the city. I asked the neighbor who sent me the photo if this trash was the result of the homeless camp moving in. He said, “Oh, no. It’s always been like this. That’s just the neighborhood.” 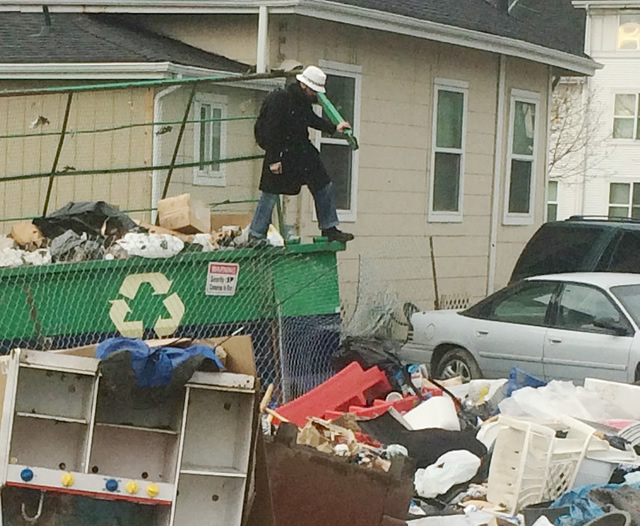 Unfortunately, city officials did not poll the Othello neighbors as to whether siting a homeless camp here was wise. Neighbors were simply summoned to a community meeting and told that the camp would be arriving in a matter of days. [See that story here.] As I reported earlier, some neighbors objected to siting the camp in this spot because of chronic problems with crime in the area. It now appears that sanitation could also be added the list of pre-existing neighborhood issues.

Homeless camps, sanctioned or otherwise, tend to be magnets for rats. [Read more here.] In this case, rats are likely already established in the area, and their numbers will no doubt increase as Othello Village fills up, adding up to 100 more men, women, and children to the vacant lot across the alley. In spite of what you might think, homeless camps generate significantly more food waste and other trash per capita than indoor living facilities. The reason for this is two-fold. First, there is typically a surplus of perishable food donated to the camps – more food than can be used by the campers – and so the campers have no choice but to throw out any food that can’t be eaten immediately. Even if campers wanted to store perishable food for later use, however, they have no way of doing that, so whatever they don’t eat in a single sitting has to be thrown out as well. There’s no way to wash dishes either, so paper plates, plastic bottles, and disposable tableware are the rule, and those items all end up in the trash as well, where they attract rats and other scavengers. 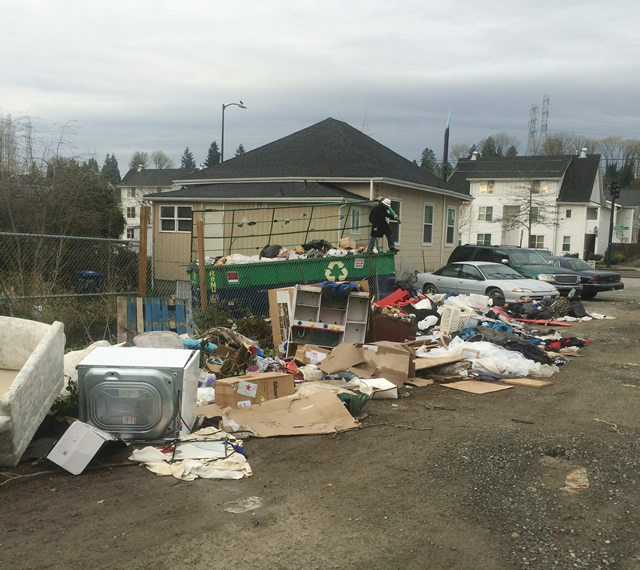 Trash heaps aren’t unique to the Othello neighborhood; there are several spots around the city that have this issue. One might think, though, that city officials would tackle this problem assertively in any area where it wanted to site an open-air homeless camp. It shouldn’t be a problem of resources, because the City has already agreed to set aside money for the camp’s operating costs. In any case, the non-profit overseeing the camp, LIHI, has sufficient resources on its own to address the problem. The group’s tax return for 2013 shows that it’s capitalized at $52 million and has an annual income of $5 million. For that kind of money, one would think they could at least spring for a one-time clean-up. Manpower should not be a problem because, as the photo suggests, there are likely to be several able-bodied people in the camp who know how to wrangle trash.

The trash has been cleared from the alleyway. Thanks to whoever took responsibility for this. Here’s what the alley looks like now. –David 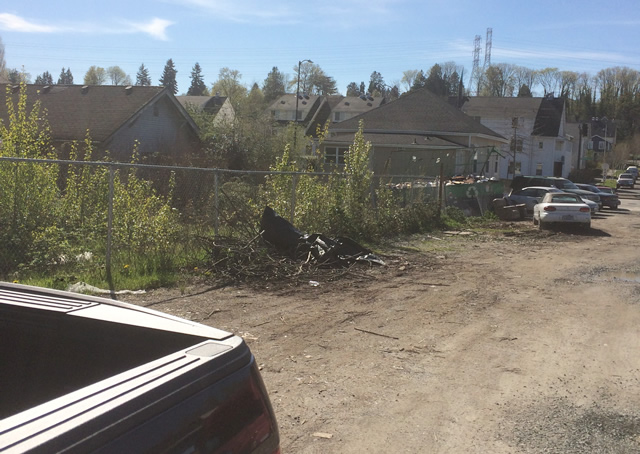