The Village Quixotic (or: How to avoid headaches by thinking with your tear ducts)

Some astute TBQ readers have been linking me stuff about Olympia’s new Nickelsville knock-off, a joint called “Quixote Village.” Here’s an extract from the 12/31/13 edition of the Olympian newspaper:

The residents of Camp Quixote are no longer vagabonds. They no longer need to move their temporary shelters from church to church every six months in the greater Olympia area.

Earlier reportage (and I use the term loosely) from Christmas Day:

On Christmas Eve, Linda Austin admired her new home as she set down a box of belongings. A couple of years ago, she faced dark and difficult times. That’s when Camp Quixote, a self-governing tent community for the homeless, took Austin under its wing.

The tent camp’s nomadic existence ended Tuesday as residents moved into 30 new cottages at Quixote Village. The project at 3350 Mottman Road SW was years in the making.

Other articles in the series:

Quixote Village (no relation to this blog) is a pet project of the the Olympian, a handful of state and local legislators, and a non-profit group called Panza. I imagine that there are strong connections between this project and Seattle’s SHARE/Nickelsville, but I don’t have any proof of that. Yet. (I plan on asking around.)

Now, mind you, I’m not necessarily against this type of subsidized micro-housing project. In fact, some aspects of it seem very level headed. I like the idea of having people living indoors instead of in tents, for example. And I’m glad that this outfit is not directly under the auspices of SHARE, Scott Morrow, Peggy Hotes, et al., even if it was inspired by that bunch.

But, on the other hand, I would like some accountability. Especially since tax money is involved. And I would like to have seen, somewhere in the Olympian’s extensive coverage, some deeper analysis of the problem of homelessness, and where exactly Quixote Village fits into that.

Unfortunately, I find no mention of drug treatment programs or jobs training in those articles. What I do find is vague talk of “self-governance,” “self-sufficiency” and “strict rules.” And that worries me, because that’s the kind of nonsense that’s been coming out of the Nickelsville’s propaganda machine for years: **

The camp is self-governed, as the village will be. All residents get to vote and determine their own futures. They can vote to decide who is admitted to the camp, or who must leave. Their rules ban violence, drugs or alcohol from the camp. Residents can be men or women, but must be 18 or older. And everybody must pitch in to keep up the camp.

Here’s another one that might’ve come straight outta the Nickelsville playbook. It implies that homeless people are homeless because others (shelters, social service agencies, etc.) don’t work cooperatively with them. (!)

“We work with the homeless people, not on them,” said [co-organizer Jill] Severn, noting that the village is one example of helping the homeless reach self-sufficiency. “There are many answers. This is certainly one of them.”

As to the question of how Quixote Village will measure success, we see that that, too, is rather fuzzy:

Severn describes a typical camp resident as “somebody who has an addiction and a mental illness and wants to get better.” She admits the camp is not all success stories, because it gives everybody a chance, “and when you give everybody a chance, you have a pretty large failure rate.”

–Hm. Pretty large failure rate, eh? OK. That’s not surprising, or even disappointing. But I guess I’m still not clear on what anyone’s doing here, with Quixote Village, that hasn’t been tried already. If it’s a matter of just giving people “a chance,” I daresay that that’s been tried. I can guarantee you that each person at Quixote Village has already been given at least one chance to turn their life around. Probably more like several chances. Possibly a baker’s dozen.

I wonder who decides who gets to stay in one of the little houses. Is there a formal application process? Or is everybody just going to take a vote on who to let in, like they did at Camp Quixote?

Or do you just have to know someone, that way it was at Nickelsville? At Nickelsville, if you’re a Friend of Scott Morrow, you get to stay in a shack. Otherwise, you can pick yourself a nice patch of dirt.

In answer to all these concerns, one might respond that Quixote Village isn’t about solving the country’s homeless problem anyway; it’s about helping individuals.

–Yeah. Thirty of them, to be precise. Which is nice. But Olympia’s a good-sized town, you know – 46,478 at last count, 254,095 in Thurston County – and I can assure you that hundreds of people are being helped out with housing there every day. So why all the hoopla for these 30?

I think I know . . . I think Quixote Village isn’t really about homelessness after all. I think it’s about swapping a big, complex problem for a much smaller, simpler one. And then solving the simple one instead.

In this case, the tough problems of What is homelessness? and How do we address it? were dropped, and in their place was put this:

How can I feel like I’ve done some good in the world, without having to actually do anything?

–And the answer to that problem was indeed, much simpler. The answer was: Quixotic Village.

It’s kind of like giving a buck to the panhandler on the corner. In the back of your mind you know what’s really going on. But you try not to think it to death, or second guess yourself, because that would spoil the fun. But still . . . you know the truth.

Does that handout solve the problem of poverty? –No. Of course not. And you know it.

Does it make you feel better about yourself?

I see that the Olympian just named Jill Severn, co-organizer of Quixote Village, to their editorial board (see here) so I’m not holding my breath waiting for them to start doing some real analysis. It’s not like I was expecting that anyway, because after all, the daily O is just a small-town outfit. But geez-louise . . . I’m even smaller outfit than them, and I beat them by a country mile.

* The September 28, 2013 piece estimates that Quixote Village will cost $1.68 million, but the December 25th article notes that “from permits to construction, the project’s total cost was about $3.1 million.” And remember: the land itself is essentially being given for free to the non-profit that runs Quixote Village. Do the math. At $3 million, for 30 150-square foot units, that’s about $100,000 per unit.

Take a look. Was it worth it? Was this the best use of $3 million? 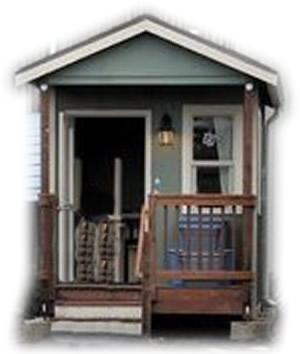 Remember: that $100,000 per box –er, I mean . . . house – does NOT include volunteered labor and supplies. Nor does it include land, which was essentially given to Quixote Village by Thurston County, free of charge.

Update (1/17/13): There is also a common area included in Quixote Village (see here), so you need to factor that into the total price tag. Let’s call that the point-1 in the $3.1 million.

** For examples of news stories planted in the Seattle media by Nickelsville’s Ministry of Information, see here.

7 Responses to The Village Quixotic (or: How to avoid headaches by thinking with your tear ducts)