Cleaning Up Puget Sound, One Rainstorm at a Time

Seattle’s sewer system was built over a hundred years ago. Under this old technology, the pipes have to accommodate both rainwater run-off and sewage. Whenever it rains hard (or rains not-so-hard but for several days straight) the system gets overwhelmed and mixed sewage inflow and rainwater are then dumped into the Sound. CSO storage tanks are designed to prevent that, by holding the overflow water until after the rains are over. The excess sewage can then be pumped back into the treatment system before it is released.

Currently, up to 5 million gallons of untreated sewage + street run-off are dumped into Puget Sound each year just at this one site in West Seattle, but when all the CSO storage tanks are finished, and all the other remediations – such as hundreds of rain gardens and permeable pavement projects – are in place, that amount will be reduced by 90% or more. 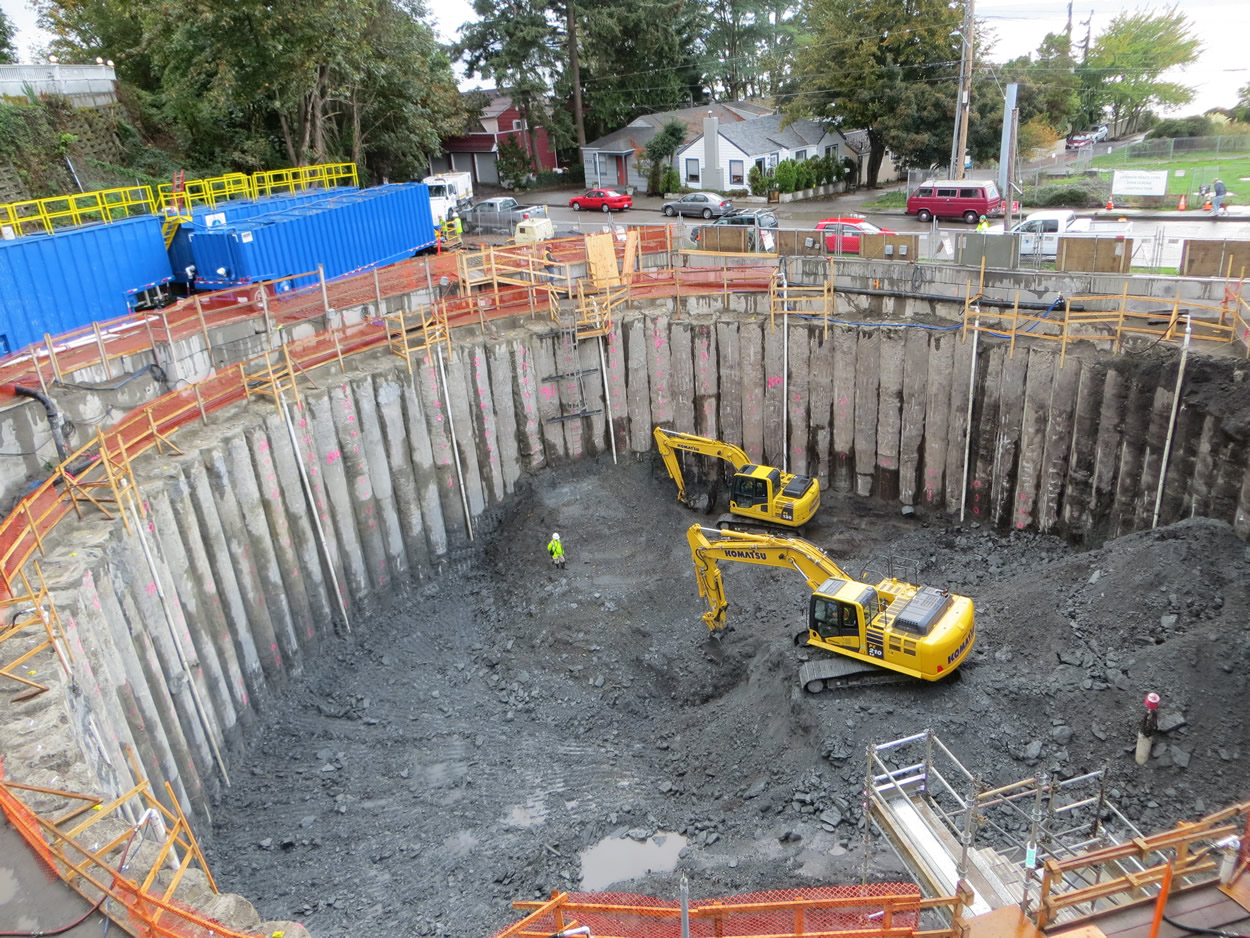 The CSO tank is being built in a densely populated residential neighborhood. The site was determined by King County’s Wastewater Treatment Division – in consultation with a group of neighbors and other interested parties from government – to be the site with the greatest benefit-to-impact ratio. Still, as you can see from the photo above, the tank is in a residential neighborhood, close to the shoreline.

Several homes were torn down to make room for the tank, and one neighbor, Dr. Ron Sterling, who lives in the rental unit directly between the construction site and the water, was very vocal and persistent in his opposition to the project. In the months leading up to the groundbreaking, Dr. Sterling posted a series of flyers criticizing the project at or near the project site. He also erected a series of elaborate and colorful displays lampooning city and county officials for their involvement in the project. 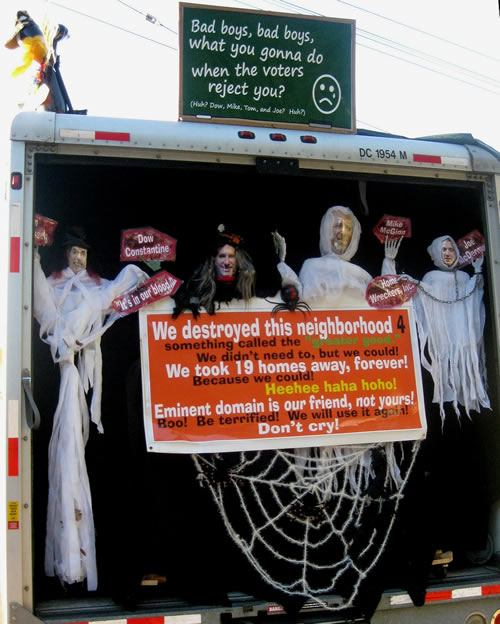 This Halloween-themed diorama was erected by Murray CSO project neighbor, Dr. Ron Sterling, to lampoon politicians who he believed disregarded neighborhood concerns about the project.

As of October 28, 2014, construction is proceeding, with a scheduled completion date of late 2016. When I visited with project spokesperson, Doug Marsano, at the site recently, he told me that the project is being constructed in such a way as to minimize impacts to the neighborhood. The cement columns you see surrounding the excavation in first photo above are called “seacant piles.” Seacant piles are a technology used for projects that involve digging below the water table. Instead of digging a large hole directly into the earth and then pumping out the seepage, construction crews first drill a series of holes and pour cement into them, creating a wall of cement columns that extends below the water table, blocking the seepage. Seacant pile construction is more complex than traditional dig-and-pour operations, but it saves time over the length of the project, and makes for a much cleaner, lower-impact project overall.

In this video, we see various operations going on at the CSO tank construction site:

Project Spokesperson, Doug Marsano, had the following to add to this story via e-mail:

Overflow volumes will change annually depending on the strength and frequency of the winter storms are each year. The County’s goal for the tank is to reduce the number of overflows to one per year over a long-term average. Doing so in dry years will likely reduce the volume by more than 90 percent of the average. In wet years, it could be less.

Note that the five million gallons you reference is just for the Murray project. Total overflow volume for both city and County systems is significantly larger, which is why you will see so many different projects underway around the city. Together, all of the improved CSO controls will give us a healthier Puget Sound, Duwamish River and Ship Canal.

These are technical points that may be more than you want to explain in your post. Still, out of respect for your interest in the project and the time you’ve taken to talk to me about it, I wanted to clarify how the tank is supposed to work (controlling the number of events rather than reducing to a certain volume) and the scope of the problem.

2 Responses to Cleaning Up Puget Sound, One Rainstorm at a Time