This page contains a discussion of a specific low-income housing provider business in Seattle. For the main page and introduction to this topic, see here: Homeless, Inc.

I gathered this material using a Public Disclosure Request.

*Covers only the period from April 1 through December 31. Presumably, money from previous year contracts be applied toward covering the gap. What this means is that you can assume that the actual City money used by this facility for the year 2013 was significantly higher than the stated amount.

Note that 2011 there were 11 executive officers working for CCS who drew salaries of more than $100,000, with president Michael Reichert pulling in over $160,000 in pay plus another $27,000 is fringe benefits. Unfortunately, this is a fairly typical package for a non-profit executive. (See page 7.) 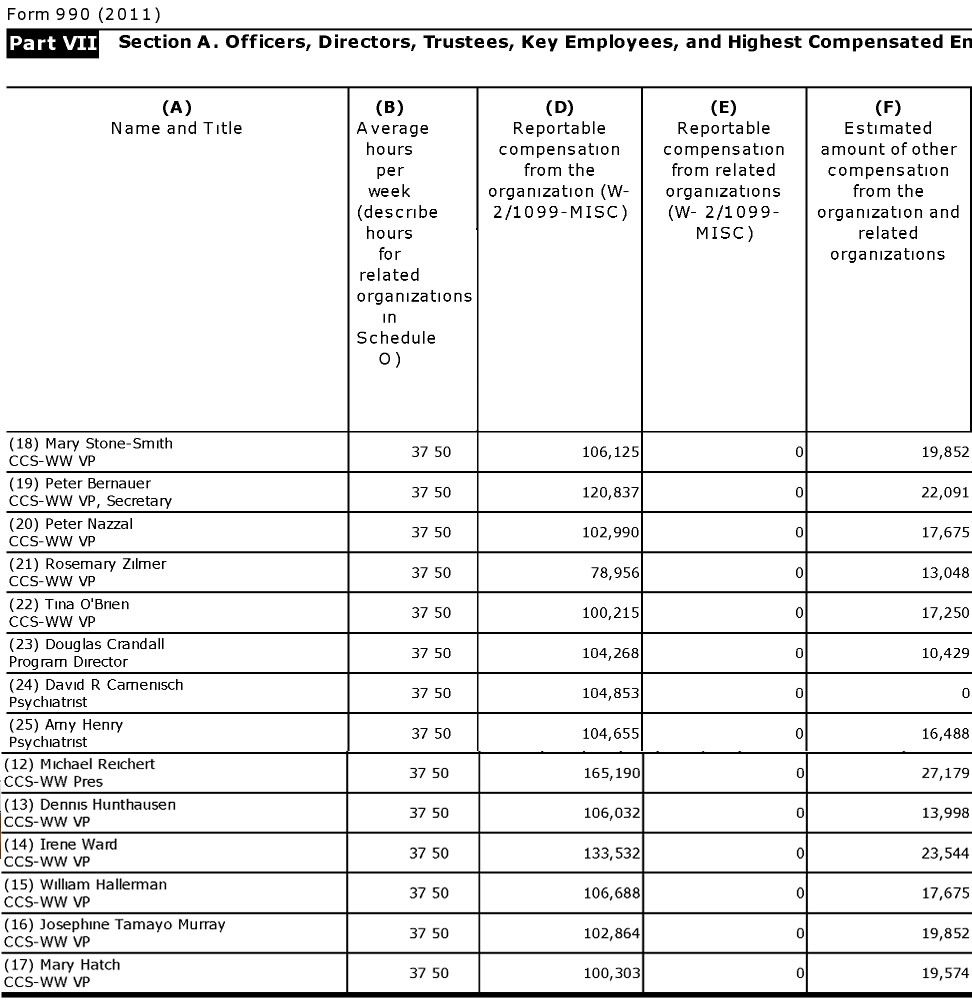 CCS paid a total of $75 million in wages and benefits for all employees in 2011 (page 1, line 15), and this represents nearly three quarters of its total operating budget. Rolled into this figure, however, are salaries of the many service providers it employs. Before judging whether the $75 million figure is excessive, we’d have to have an itemized list of the many services CCS provides. The breakdown in Part XI (page 10) gives us a better picture of the ratio of salaries to other “program costs” — but even that picture is far from complete.

Remember: Not All CCS Housing Programs Are for the Homeless

Strictly speaking, some of these CCS housing programs are (wisely) aimed at preventing homelessness, rather than helping those who are already homelessness. It seems reasonable to count such programs as part of the money Seattle spends on homelessness.

Also, note that housing programs, per se, are a tiny proportion of CCS’s total operation. As you can see from their tax year 2011 990 form, CCS has an operating budget of nearly $100 million, with net assets (e.g. real estate holdings) of more than $45 million. However, the programs and assets that account for this money are spread out across several cities and counties.

It’s not uncommon for a low-income housing program to pay for operations out of more than one pot, and these contracts reflect that. The Sacred Heart Shelter, for example, is funded out of at least four sources in addition to HSD money, as the table from the Sacred Heart contract (page 16) shows:

Thus, to determine what people really spend just to run Sacred Heart Shelter for one year, take the “other sources” total from the table above ($810, 657) and add that to the amount that Seattle taxpayers spend ($146,632) for a total of $957,289. Since I’m focusing on what Seattle taxpayers spend, I’ve included only the taxpayer supplied funds, but if you wanted to get technical, you could say that, in the larger sense, Seattle spends much more than amount that for each of CCS’s homeless programs.

Calculating the number of homeless people served by any one program can be tricky, because the way beans are counted can vary from service to service. A day center will help many more people during a given period than a live-in shelter with case management. Thus the number served cannot be compared with equal weight across different programs.

CCS is linked to SHARE via personnel, programs, and history. The Aloha Inn transitional housing program (Item #7 above) is managed by CCS. However, the Aloha is owned by the Low Income Housing Institute, another heavy hitting 501(c)3 program that was co-founded in 1991 by Michael Reichert (current director of CCS), Scott Morrow (current director of SHARE), and Frank Chopp (current speaker of the Washington State House and employee of the non-profit group Solid Ground, which is also a major player in Homeless, Inc.) Scott Morrow/SHARE have maintained an office at the Aloha Inn for at least 20 years.

CCS is also a beneficiary of taxpayer largess via its connection with the King County Crisis Line (2-1-1) service, which is funded by County and City money and which refers callers back to CCS shelters for service.

My Own Experience with CCS

Catholic Community Services has a good reputation, not just in Seattle, but around the country. Two years ago I took my friend to apply for a transitional housing position at the Aloha Inn and was impressed by the businesslike and professional appearance of the staff. Rumors have been bruited about for years to the effect that since Scott Morrow has an office there anyone who is on his “black list” will be denied admission to the Aloha program; however, I know of at least one instance of someone having irritated Mr. Morrow but still getting accepted into the program. I consider the accusation that Morrow controls CCS’s admissions policy to be unsupported.