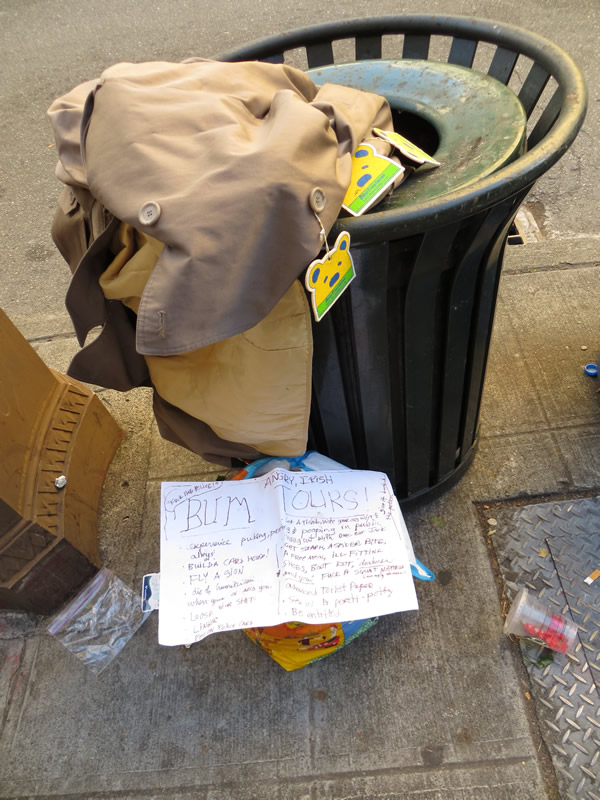 This picturesque tableaux was discovered around 1st and Seneca, just a block from the Seattle Art Museum and Benaroya Hall, two world-class cultural amenities. It’s not uncommon to see crud like this around on the sidewalk at all hours and even during high tourist season. Apparently some angry and sarcastic homeless person has decided to ditch his duds, along with a collection of his writings. Actually, there’s a good chance that what happened here is that dude was tossed out of the Downtown Emergency Service Center (DESC) or some other free squat in the vicinity, and he didn’t have the wherewithal to take his shit with him. I’ve moved folks in and out of these places, and believe me when I tell you that it’s an education in how little a person actually needs to “own.” I’ve seen people throwing away family pictures, treasured heirlooms, everything but what they could carry with them and sleep on. After just a few weeks of being homeless, you know the drill: Whether you’re under a roof in a downtown squat or right out on the street, if you can’t keep a eyewatch on it 24/7 then lose it NOW, because your’e gonna lose it in the end anyway, and in the meantime it’s gonna cause you nothing but grief.

There was a wealth of good material in the bag, and I would’ve liked to take some of it with me as a souvenir. But I didn’t know where that material had been, and my companions were waiting, so I gingerly unfolded the first leaf, took the photo, and then moved on.

With spelling corrected, the paper reads:

• Get a ticket, wipe your ass with it, give it back to the police
• Experience puking, peeing, and pooping in public alleys [Nice alliteration! -Ed.]
• Build a card house!*
• Fly a sign**
• Die of humiliation when your ex sees you
• Lose your shit
• Linger
• Pee on police cars
• Hang out with One-ear Jack
• Get staph, a spider bite, a free meal, ill-fitting shoes, boot rot, diarrhea and you***
• Fuck a squat mattress (an ugly woman)
• Advanced toilet paper
• Sex in a porti-potty
• Be entitled 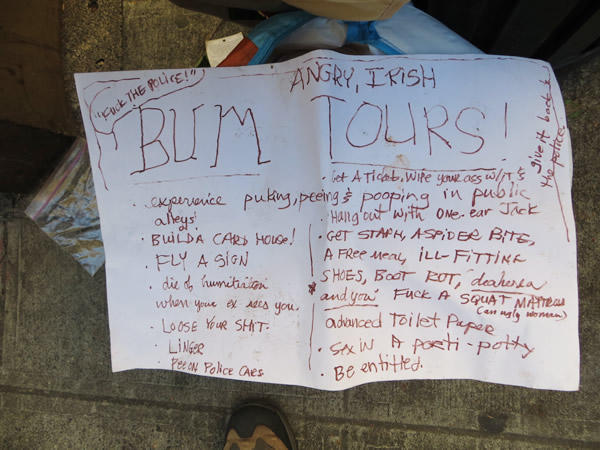 * I don’t know what “building a card house” means. It might refer to gift cards, meal tickets, or something of that nature. Or perhaps fake IDs.

** Refers to holding a sign up to street or sidewalk traffic, asking for money. (Panhandling)