Here’s a cleverly disguised puff-piece from a recent copy of Seattle Times. You can file this one under “Corporate Media Bias”:

It’s an article about billionaire Paul Allen, owner of the Seattle Seahawks NFL football team. It seems that Mr. Allen is planning to shell out millions – on top of the millions he’s already shelled – to fund research that will further the science on brain injuries. And this includes of course football-related brain injuries.

So the guy’s trying to do a good deed. What’s wrong with that?

Well . . . he’s trying to do two good deeds actually: one for brain science and one for his football team. Regardless of whether the brain thing works out, I’m sure the football thing will.

Ask yourself: What is the connection between football and brain damage?

Answer yourself: They go together. Like Yin and Yang. Like Abbot and Costello. Like gin and tonic. You don’t need to spend one more dollar on studies to discover that.

As long as there is football (and especially pro football) there will always be brain injuries in football. Got that? No matter how many precautions you take, and no matter how well padded the helmets, there will always be brain injuries in football. That’s part of why people LIKE football, remember? Not for the injuries, per se, but the violence that causes them. Fans love to see those head-on collisions between 300-pound linebackers, the high-speed thrown downs, the satisfying pile ups. That’s why they go.

But all that stuff is hard on the ole noggin. And it always will be. No matter how you pad it. 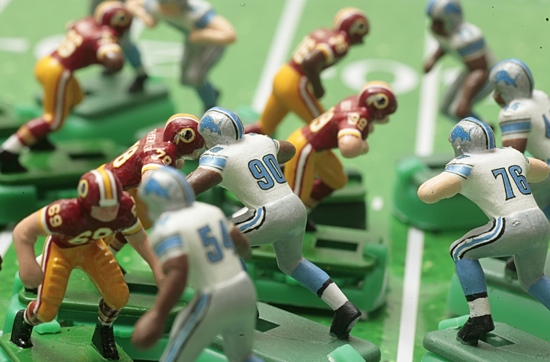 Since football is inherently dangerous to the brain (and always will be) the only logical conclusion that an honest brain scientist could arrive at is that football should be banned.

Do you think that’s the conclusion that Mr. Allen’s research team will arrive at?

Can’t you just picture it:

Hm. Doesn’t seem likely, does it?

Now let’s try adapting the original Seattle Times headline to a different industry. How does this grab you:

Do either of those headlines sound fishy to you? They should.

Tobacco companies did, in fact, fund such research in the 1970s and ’80s. And not surprisingly, when the results were in, they suppressed them. And the corporate media cooperated in this suppression, which was the subject of a movie called The Insider.

Wait a minute? Are you saying that Paul Allen would suppress the results of his own study? After crowing about it in the Seattle Times?

–No. I’m not saying that Allen would suppress results. But then, if he’s bankrolling all these hot-shot neurologists, and steering the research they’ll be doing for the next ten years, he won’t have to suppress anything. As their patron, he can keep these scientists chasing rabbits down any rabbit holes he wants. And all while giving out that he’s making football safe.

He will be making it marginally safer, it’s true. But not safe.

I dare say that with an occasional visit to the lab (just to see how everything’s going) and an extra million or two, judiciously applied, Allen can ensure that these brainiacs don’t come to the wrong conclusion, which (again) is that football is bad for the brain and should be banned. And any scientist who looks like he might even possibly be going in that direction will be brought to heel or promptly defunded.

Smart guy, this Paul Allen. Nothing wrong with his brain, that’s for sure.

Well, think about it like this: If you were to ask any individual at the Seattle Times – from the lowest copy editor to the scions of the Blethen family (who own a controlling share in the paper – the universal answer would be: We care! We care about football-related concussions. We want to reduce the number and severity of them. We want to make football safer. And we think our readers care about that, too.

–And they’d be telling the truth. Nobody is pro-concussion, of course. So then, why do they give Seahawks owner Paul Allen a free ride, just because he’s throwing a bit more of his money into research? Did the Times get taken for a ride here or what?

Not exactly. You see, the Times stands in the same relation to Paul Allen and the Seahawks as it stands to Boeing, Microsoft, Amazon, Starbucks, and every other corporate giant in town. These guys all need each other. The newspaper needs the corporate giants to put ads in the newspaper and to give them story material, and the corporate giants need the newspaper to give them good press. A front-page story that’s favorable to Boeing (e.g., “Boeing lands multi-billion order for Dreamliners”) is worth hundreds of thousands of dollars in Boeing advertisements in the paper. Both are designed to make Seattle-ites feel better about Boeing, but the story is actually much more powerful than the ad, because it has the legitimacy of being an ostensibly unbiased presentation of the facts, as opposed to being a one-sided presentation of Boeing’s point of view.

Boeing’s paid advertising is pretty useless in terms of making people feel good about the product, and Boeing knows it. (When was the last time you purchased a Boeing product? When was the last time you decided NOT to fly somewhere because the airline didn’t use Boeing products?) However, that’s not really the purpose of Boeing’s advertisements in the Times. The purpose of the advertising is to reward the Times for reporting on Boeing in a way that is favorable over time. Although the Times is allowed to run an unfavorable Boeing story from time to time, over time, the coverage must be favorable, or Boeing will trim its ad budget accordingly. And could you blame them?

Beyond this, it’s simply a fact that most people around here like Boeing because of what it does for the local economy. They might have a gripe with a particular Boeing CEO, but on the whole, people like the Boeing company, because it puts money in their pocket. So they don’t want to see a lot of negative reporting about it.

Ditto for Paul Allen. People might dislike him as a person, but they still like his football team, because they like football, and the Seahawks are the home team. Or they like his company (Vulcan) because they have some financial interest in it. So here again, knowing the stake Mr. Allen has in the Seattle economy, people round these parts don’t want to read a lot of negative stories about him. And the Times is merely honoring that by running the occasional puff piece on Mr. Allen.

So what should the Times have done differently?

In an ideal world, the Times and all news outlets would disclose two things at the beginning of each news story that involves a corporation:

1) The financial interest the newspaper has in that corporation.

-Does the corporation advertise with the paper? (How much?)

-Does the corporation have any other relationships with the paper? (e.g., joint stock holdings, in-common directorates, charitable associations)

2) The way the story came into being.

-How did the Times hear about the story?

-Did the Times approach the corporation or vice versa?

I have no idea how much advertising money Paul Allen pumps into the Times through his various local enterprises, but I imagine it’s considerable.

As to provenance, it is likely that the Times did not dig up the Paul Allen/brain-injury research story on its own but rather that the story was fed to it, either by Allen’s own media people, or by the PR desk at the Seahawks, or by one of the research departments that will be benefiting from the funding. (Most brain researchers couldn’t give a fig about good publicity, but the institutions they work for sure could.) In any case, the way it almost certainly played out is that someone associated with Paul Allen put a call into the Times news desk (they’ve probably got it on speed dial) and said something like:

Hey, Jim!  [or whoever] We’ve got a great story for your Science page. We’re going to be doing our own press release in a few days, but in the meantime, here’s a draft copy of it, and here’s a list of people you can talk to . . .

Now, isn’t that the kind of information you’d like to know when you’re evaluating the veracity of a news story about a corporation? I know I would want to know that.

On the other hand, disclosing all that information for each story would probably make for a pretty dull newspaper, so I think the best approach for the Times to take would be to simply try and write stories from a less biased perspective. That doesn’t mean they should try to eliminate bias; that’s a fool’s errand. It simply means they should sit down, admit their bias to themselves, and then proceed to write the story as if they had no personal interest in it.

In other words, Seatte Times staff: just try to be as honest and ethical as you can be. Is that too much to ask? I think not.

In the case of the Paul Allen story, it should probably not have been written at all, because it’s not really news. In the first place, the amount that Allen is kicking in to the research kitty is minimal compared to the total of what’s out there. Even from the standpoint of what Allen has already been spending, it’s small potatoes. Which is not to say that football-related brain injury is not a story in itself: It is! But Paul Allen’s role in that story is a minuscule one and is certainly not worthy of putting him in the headline.

To write this story in a more relevant and unbiased way, the Seattle Times should have made the link between football and brain injury the focus of the story. They could then have talked about some of the latest developments and then, to put a more positive (or at least neutral) “spin” on it, they could have made the point that, even though football-related brain injuries are tragic (and unavoidable) scientists are turning this tragedy into something positive by using the brains of football victims to further the science generally. See this piece from the New Yorker magazine for an example of what I’m talking about:

New Yorker: Does football have a future?

Finishing up, the Times could have mentioned the fact that local boy and Seahawks owner Paul Allen is funding some of his own research along these lines and his team is making progress. Giving Allen’s people the last word would give the story local color and relevance without vilifying Allen, exaggerating his role, or painting a happy face over the relationship between football and brain injuries.