Background: “Nickelsville” is a series of Seattle-area squatter camps run by a man named Scott Morrow and his lady friend Peggy Hotes. Morrow and Hotes also run a non-profit shelter organization called SHARE that already gets millions of dollars in funding from various government agencies and is always clamoring for more.

Although SHARE claims to be providing shelter beds for homeless people in the city of Seattle, the group has been unable to account for how they spend the money they get. Meanwhile, SHARE operates two roving “tent cities” at church properties around King County, in addition to to three roving semi-legal homeless camps they collectively refer to as Nickelsville.

These are recent pictures taken at Nickelsville’s Skyway “neighborhood“: 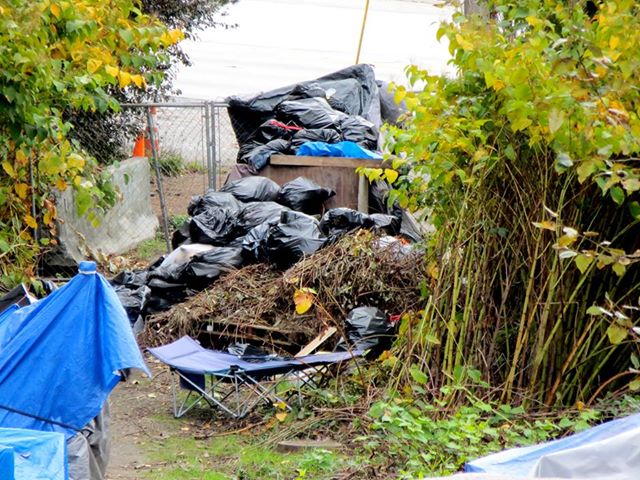 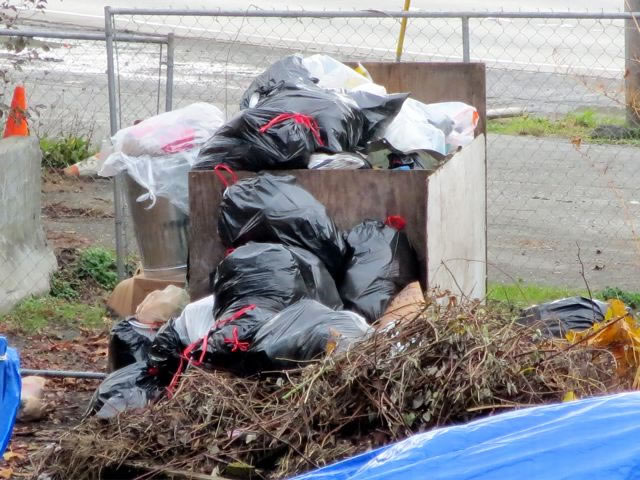 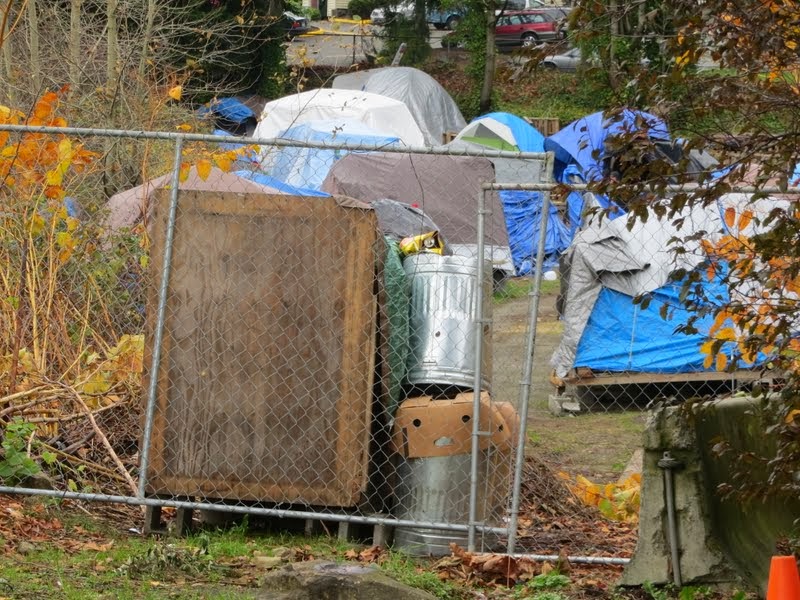 This is obviously unsanitary, in addition to be a fire hazard, and an eyesore, but it is currently tolerated by King County government, thanks to a permit for the camp issued by Jim Chan of the King County Department of Permitting and Environmental Review. (See below.)

These conditions have been prevailing since September 1st, 2013, when the camp moved – illegally, and without a permit or advance notice to the Skyway neighborhood – onto empty property owned by a millionaire tax dodger named Peter Sikov, who owes back taxes of more than $73,000 on several properties in the area. He’s also pals with Scott Morrow, so that’s very convenient. (He’ll probably figure out a way to use Nickelsville as a tax write-off.)

Examples of Sikov back taxes owed:

So why is this happening?
Why is trash being allowed to pile up like this?

1) It’s happening because Nickelsville either can’t afford Dumpster service or because the trash company won’t work with them any more, after being stiffed for previous bills. According to a recent news story citing someone in charge at the camp, the Nickelsville organization owes $9000 for expenses related to their eviction from their previous squat at Highland Park, Washington. [See a slideshow on that disaster here.]

2) It’s happening because Jim Chan of DPER gave Nickelsville permission to let the trash accumulate on the ground until a volunteer agrees to come by with a truck and pick it up. When Nickelsville (belatedly) applied for a permit to camp out on the land, they promised they’d have a Dumpster on site, but they never got one. When Mr. Chan came through for a pre-permit inspection, he could see that there was no Dumpster on site. Incredibly, he granted Nickelsville the permit anyway. How did he get away with this? Simple. He just equated the trash pile on the ground with a “dumpster.” See the inspection letter here:

At the time of the inspection, the site was reasonably clean; the trash-heap had just been hauled off. However, Mr. Chan is well aware of the general situation at Skyway Nickelsville. Residents have been sending him pictures of the trash and filing complaints all along. In addition, I’ll be sending him a link to this story.

3) Finally, this is happening because of Scott Morrow’s “Fuck You” attitude toward government officials and citizens. He’s just a sloppy, trashy person and there’s no nice way to put it. It’s  Fuck You attitude. The more crap people tolerate from him, the more he rubs their face in it.

It should be obvious to everyone by now that people like Scott Morrow – people who can’t provide the most basic standard of cleanliness to the people he claims to be caring for – have no business running a single homeless camp, let alone three. And it should also be obvious that people like Mr. Chan – people who either can’t or won’t do their job as public servants – need to be removed from that job, along with anyone who’s protecting or encouraging them.

On Monday, I’ll be contacting the Seattle-King County Department of Public Health and filing an official complaint. Last year the Health Department wasted tens of thousands of taxpayer dollars on rat control at Nickelsville Highland Park, and it was all because people there were letting trash pile up where the rats could get it.

As of Monday, November 18, trash was as bad as ever at Nickelsville. Bags of trash have been accumulating pretty much constantly since Nickelsville moved onto this site (illegally) on September 1st. A brief exception was around the beginning of this month when Jim Chan of DPER made his inspection visit. Nickelsville organizers made arrangements to have the trash carted off before he got there. After he left, the trash pile quickly regrew.

Documented complaints from several Skyway residents have been coming in to Mr. Chan’s office regarding this situation, along with complaints from other public officials. Mr. Chan has responded to these complaints by noting that, as of his inspection two weeks ago, there wasn’t a pile of trash on the site; therefore, he considers Nickelsville to be in compliance with the law and no enforcement action is necessary. Below is a photo of the Nickelsville Skyway “dumpster” as of about noon on November 18. This photo has been sent to Mr. Chan, as have the other photos I’ve posted. 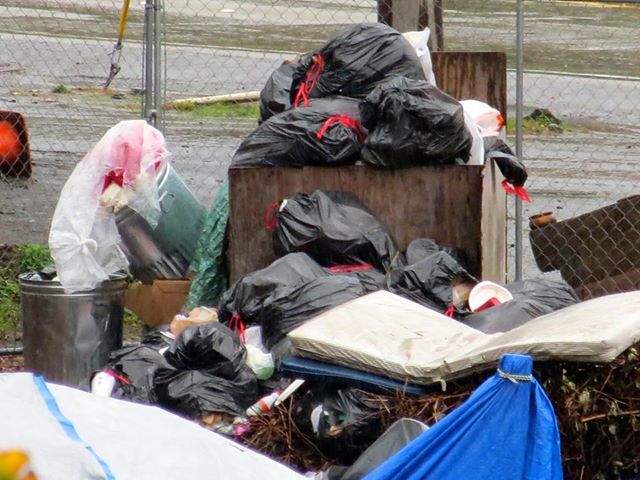 Another picture of the camp. As you can see, it’s a mess, and trash is accumulating everywhere, not just in the corners. 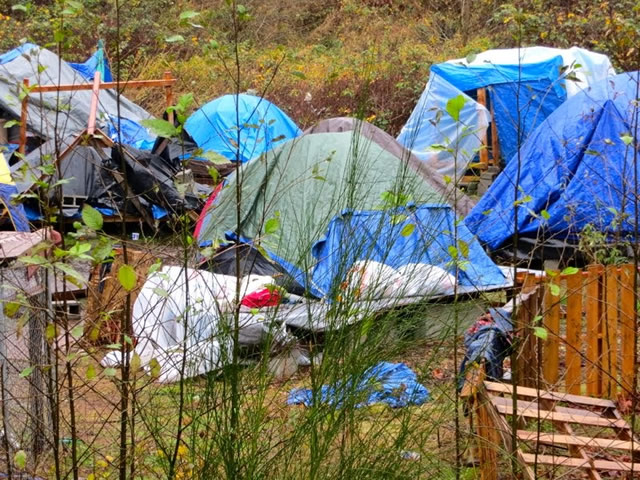 Who in their right mind would believe that Scott Morrow, Peggy Hotes, and SHARE are capable of managing a homeless camp? Hell, they can’t even afford a Dumpster! And they’re still $10,000 in hock to Waste Management (or someone) after the Highland Park move-out. And that’s after the City of Seattle spend $500,000 to move people out AND paid for the massive clean-up tab!

And remember: Skyway is just one of their operations. Besides this, they’ve got two other camps downtown: Nickelsville E Union (for thugs) and Nickelsville on Jackson (for children and NV aristocracy) and two roving “tent cities” elsewhere in the County. And then they’ve got a couple hundred homeless beds scattered throughout the City . . . or so they claim.

SHARE takes in millions of dollars in public and private money every year, and they get all kinds of special favors from politicians like Mike McGinn and bureaucrats like Jim Chan. They claim they’re addressing the problem of homelessness. But after all these years, what do they have to show? SHARE doesn’t offers homeless people any plan for getting people into housing, and they don’t have any paperwork to show what they’re spending all that money on. (Believe me. I’ve asked.)

You can see for yourselves how people are living at Nickelsville.

Every day, in every way, the trash heap known as Nickelsville Skyway is getting worse and worse . . . 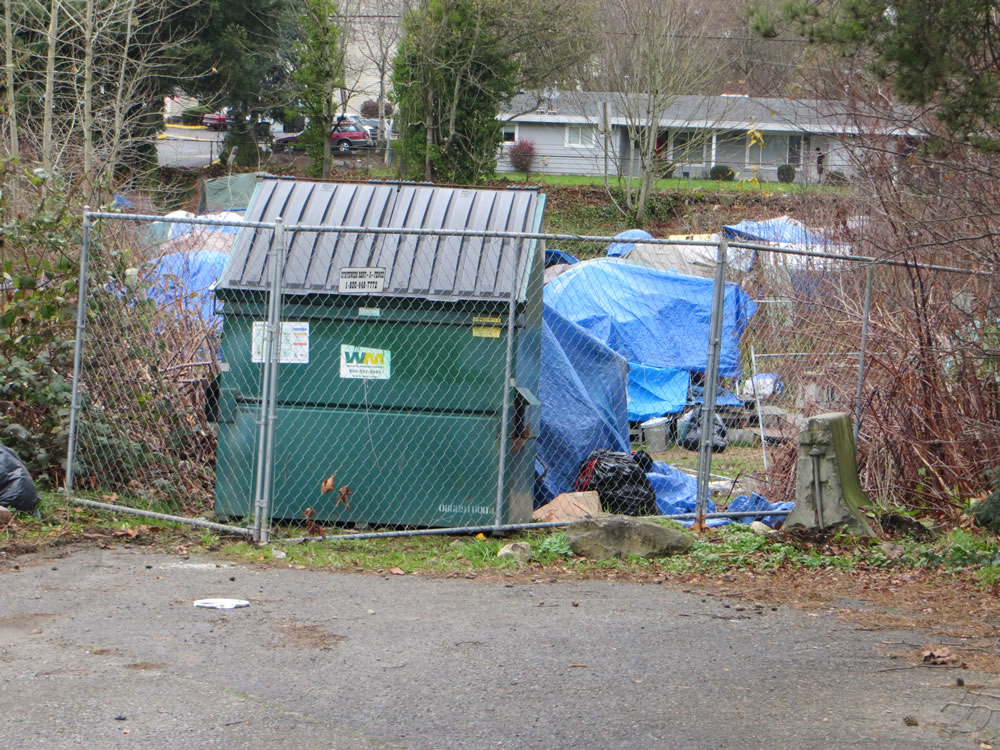 Wouldn’t it be lovely to be the owner of that blue-grey house on the hill? My, what a view! And what a smell!

Notice that there’s now a Dumpster in the picture. That Dumpster landed there two days ago, thanks to the efforts of a West Hill Community Association board member, who worked with the Dept. of Permitting and Environment Review for more than two months (!) trying to get a Dumpster on that site.

Notice also that the Dumpster is facing the wrong way, with access pretty much blocked by the hurricane fence. A guy in the neighborhood told me that when the Dumpster was delivered, people in camp ignored it. Folks were sitting all around the camp watching, but nobody lifted a finger to tidy up.

–But then, why should they? There’s much more trash on the ground than could possibly fit into a Dumpster that big, and unfortunately this Dumpster is only good for a one-time pick-up anyway. And even that is being billed to the taxpayers ($671) and not Nickelsville. Obviously Nickelsville should be footing the bill for this but, according to them, they’re broke. They still owe money to Waste Management for the Highland Park move-out. So you might ask (again): If they’re broke what makes them think they can run a camp for homeless people? Do they have some special skills in this area? Really . . . how much expertise does it take to get a bunch of people together and pile up trash in a vacant lot? 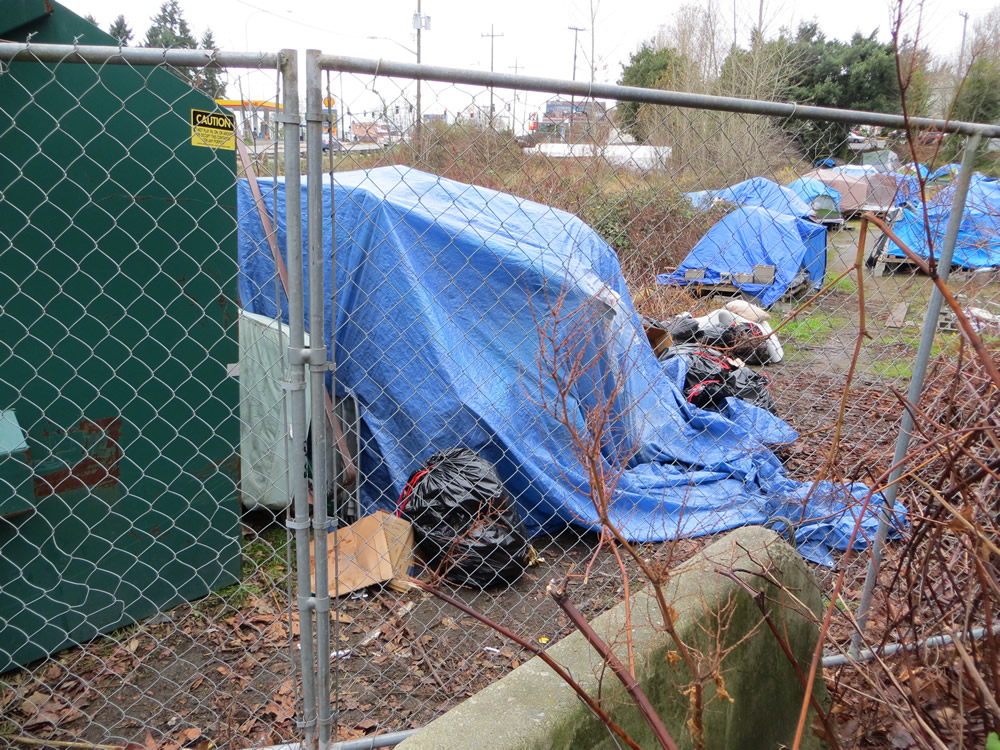 That’s not a tent behind there, folks. That’s a 20′ by 20′ pile of dreck, covered by a tarp. People are afraid to lift up the flaps (Yikes! There’s rats under there!) so now they’re tossing bags of trash outside the tarp, even. Worse: Up front, by the pantry, they often leave the lids off the food-refuse cans. (Why worry about it now, right? If there’s rats, there’s rats.)

I called in an inspection from Public Health, and the Public Health guy told me he gave Nickelsville coupons for free dump runs. The dump is just ten minutes down the road, so honestly, I don’t know what’s stopping Nickelsville from organizing a few volunteers with trucks to haul all this shit outta there. Where are all the sanctimonious church ladies and bleeding-heart politicians now, huh? There must be at least one pick-up truck in that bunch somewhere.

Hell, they don’t even need outside volunteers. SHARE (the outfit that runs Nickelsville) got a utility van donated to it by King County a few years back . . . 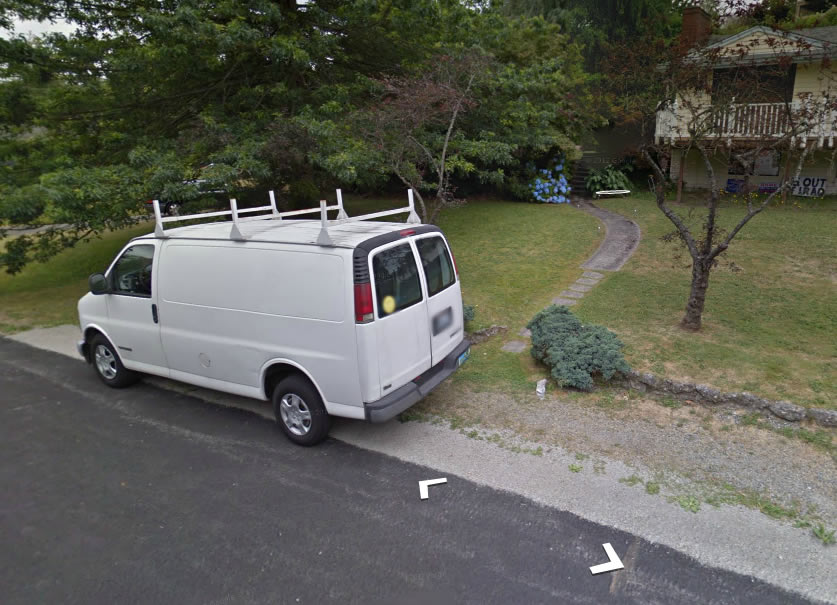 Yowzah! Is that the same one Attorney General Bob Ferguson helped ’em get, back when he was on the King County Council? I bet it is! Fold the seats back and put a cargo bin on top of that sucker and wham-o! you got yourself a swell little refuse delivery vehicle. Why not?

Anyway, my point is that between the free utility van, the free dump run vouchers, the free Dumpster, the volunteers with pick-up trucks, the friendly Health Department, and all the able-bodied men and women sittin’ around in that camp, they ought to be able to keep the trash down.

But they’re not keeping it down, obviously. And you know why? Well for one thing, keeping the place tidy doesn’t jibe with Scott Morrow’s “Fuck You!” attitude. What he’s doing here, clearly, is punishing people in the neighborhood for complaining about the camp. But he’s got  another angle on this, too, I bet. See, I think Scott wants to force the County to pay for all the clean-up costs in Skyway – just like he did in Highland Park – and then he can just keep those dump-run vouchers for himself. I don’t know what the face value is on those suckers, but I’m guessing they’ll pull at least $20 a pop on the black market.

And speaking of Highland Park, the more time passes, the more this Skyway squat resembles the last days of the Highland Park squat. Oh, what an unholy mess that one turned out to be. 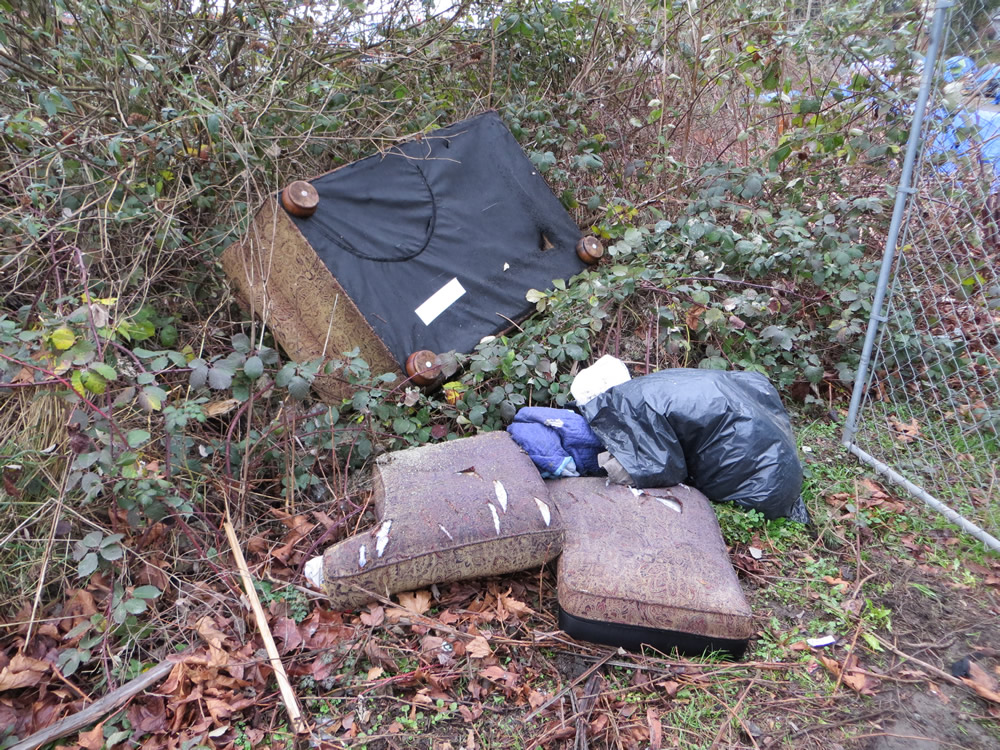 At the end, people were dumping all kinds of crap there at Highland Park. It got to be so you couldn’t even tell where Nickelsville ended and where the crap pile began. But I guess that was by design. It was just another Fuck You! from Scott Morrow to the City of Seattle, for having the nerve to evict him from public land.

But just when you think you can’t get any more cynical . . . look what happens. The Low Income Housing Institute (co-founded by Scott Morrow, Frank Chopp, and Micheal Reichert in 1991) has some kind of “gala” auction to raise money for itself and its pals, including Nickelsville.

Just look at this bunch of trendy, latte-swilling Seattle fat cats! Do they have any idea where their money is going? Or what it’s going for? Or are these auctions more about buying out of reality, than buying in. 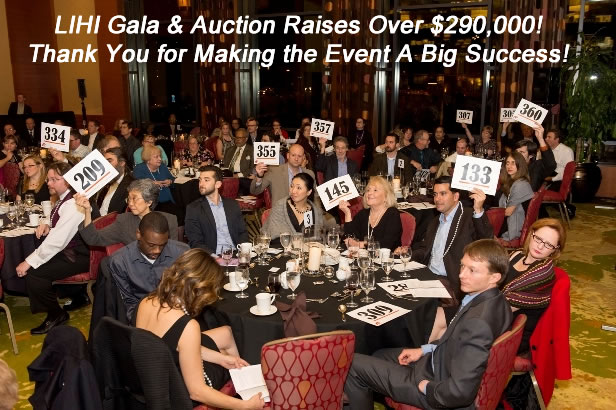 Let’s just karma-shop this picture a little bit, shall we?

How’s it look now? I call it “Gala Auction Trash.” 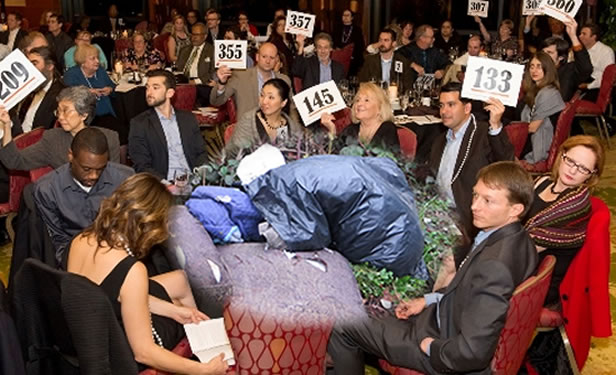 You wanna buy a signed copy, maybe? Hell, I’ll give you one, if you’ll just promise to haul the trash away from Nickelsville in Skyway.

Take a last look, folks. This is what went up on the “Nickelsville Works” Facebook page ten days ago: 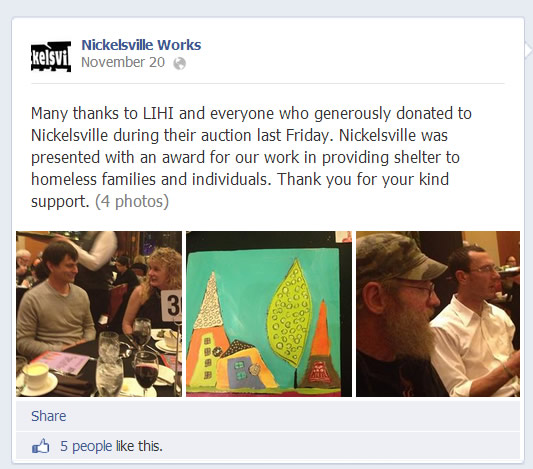 And this is what I saw at Nickelsville today: 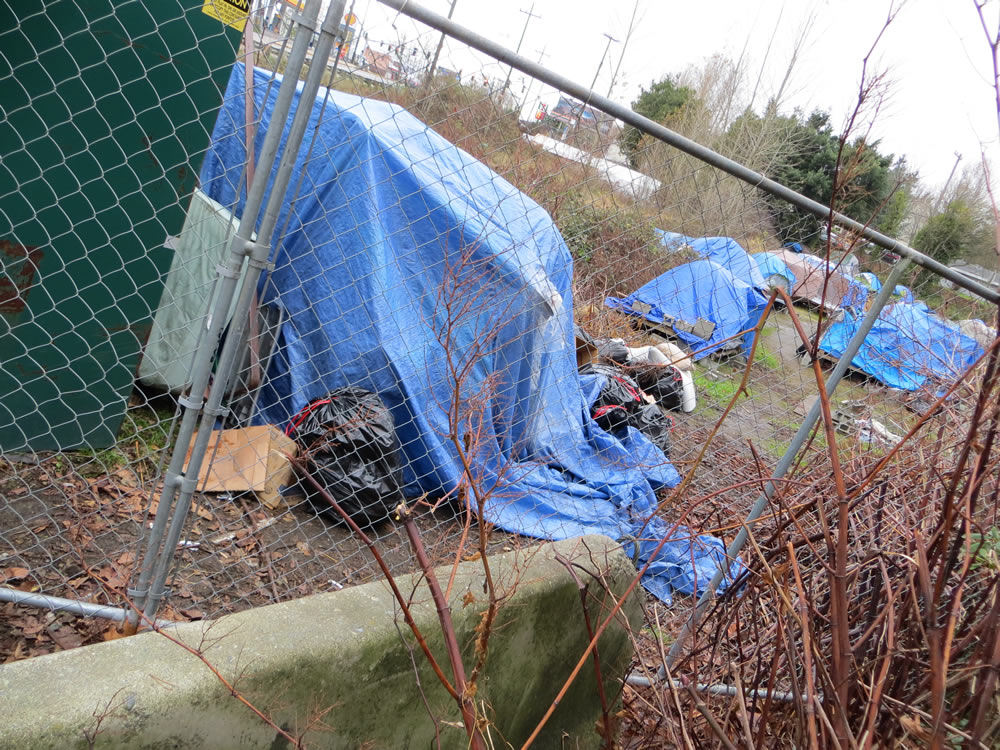 Once again . . . something is very wrong with this picture. 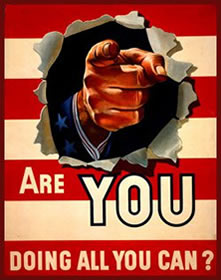