I offer this recent guest editorial from the Seattle Times for your edification. The author, one Derek Low, is a student* in the MSW (Master of Social Work) and MPH (Master of Public Health) programs at the University of Washington:

It’s not a badly reasoned piece. In fact, I agree with one of his main points. There really ought to be a safe and permanent place for Nickelsville – a place that offers shelter from the elements, a modicum of sanitation facilities, and decent food. Unlike Mr. Low, however, I feel that case workers (like his future self) do have a role to play at Nickelsville. Nickelsville will need them if for no other reason than that the camp needs a way to winnow out anyone who really wants to pull himself up out of homelessness. Case workers can help with that.

Moreover, I believe that for Nickelsville to work, it will have to be under the direct supervision of the City, and not under the control of an organization like SHARE, or individuals like Scott Morrow and Peggy Hotes. Oddly, Mr. Low didn’t mention SHARE, Morrow, or Hotes in his editorial, a fact that belies either a lack of understanding or a certain disingenuousness on his part. SHARE is, after all, the organization that runs Nickelsville, and has run it since the beginning. And Scott Morrow and Peggy Hotes are the people who run SHARE. As readers of this blog well know, SHARE has trouble accounting for the millions of dollars it has received from the City over years. SHARE also has a pattern of willful disregard for the law and for the health and welfare of the people under its “care.”

Here’s another thing that suggests Mr. Low might be weak on his background knowledge :

This summer, the Seattle City Council found an extra $500,000 stuffed under our proverbial mattress. These funds were allocated to help the residents of Nickelsville find housing, as the council also voted to displace the camp. Local churches and housing-services groups then helped residents of Nickelsville who were moved to three different sites.

No new housing was built, no new shelters were made available and no new space was opened for Nickelsville-style tent cities. Instead, Nickelsville residents get more case managers.

–There’s some confusion here about just what that $500,000 was for. It was supposed to be used to get all the people who really wanted help out of Nickelsville so the City could shut Nickelsville down. That was the plan, anyway. In allocating that money and voting to evict Nickelsville from public land in the same stroke, the City Council explicitly acknowledged that Nickelsville was not a safe place for homeless people to be. The City also mentioned, in their rationale for the eviction, that Nickelsville was not offering social services to its residents or otherwise doing anything to help them transition out of homelessness.

–And that is still the case, in fact, which should surprise no one. You see, SHARE believes that homelessness is an acceptable lifestyle choice, and that the government shouldn’t try to force housing on people who don’t want it.

Predictably, as soon as the $500,000 relocation plan was announced, Mr. Morrow and Ms. Hotes began sabotaging it, by throwing the doors wide open and inviting anybody and everybody to show up at Nickelsville, thus overwhelming the City’s efforts and “proving” that the City could never “solve” Nickelsville, that Nickelsville was here to stay. 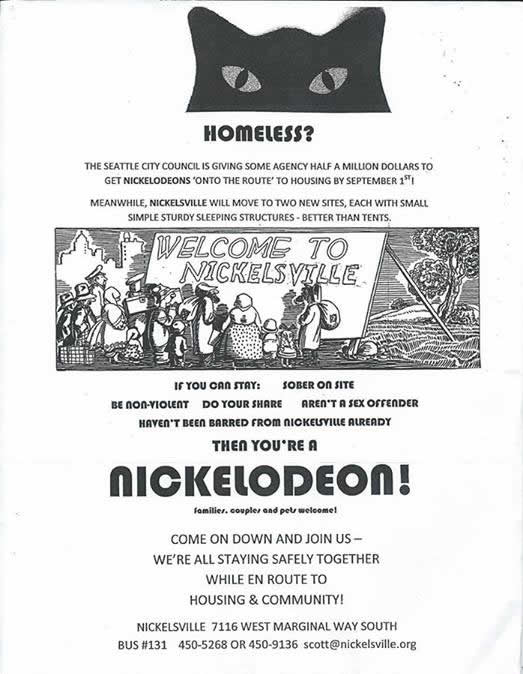 Finally, Mr. Low overlooks the inconvenient truth that many at Nickelsville don’t find housing (case managers notwithstanding) because they don’t want housing. Many of the camp’s long-term residents have been offered subsidized housing. Repeatedly. And they’ve turned it down. Other residents have not been offered housing, but then, they don’t need it, because they are perfectly capable of working and paying a market-rate rent. They simply refuse to do that, though. Which is their right as Americans.

Just take a look at Nickelsville’s official Facebook page: Here. On these pages you will see both supporters and residents. Among the residents are several healthy young males, engaged in a variety of tasks, skilled and unskilled. Can someone explain why any of these people should not be able to find jobs or decent places to live in an economy as strong as Seattle’s?

See this picture? You could call it “Nickelsville a la Nutshell” 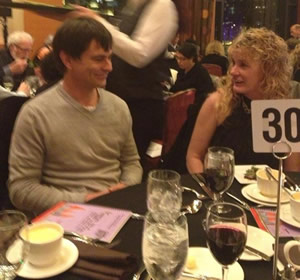 It was taken at a recent “gala auction” hosted by a big time poverty pimp LIHI (co-founded by Scott Morrow.)

The guy on the left has been homeless and living at Nickelsville, by choice, for several years now. His name is Ion (pronounced “yawn”) and in spite of what you might think, he’s not only able-bodied, he’s intelligent. Intelligent enough to apply for (and get) a $2000 grant from a City agency to build a garden at Nickelsville’s Highland Park location.** In addition to filling out the paperwork, Ion did much of the design work for the garden, and did a lot of the gardening to boot. So . . . you telling me someone who can design urban gardens can’t get a job in Seattle?

The gal on the right is Diane, and she, like Ion is a Nickelsville long-timer. Though not quite so able bodied, etc. she is just as capable of landing an indoor gig as Ioan. Diane’s had two children with her at Nickelsville at various times and has had her picture (or her kids’ pictures)  in the papers repeatedly. Believe me, she’s been offered housing. But she’s declined.

Y? –EZ! Because living in a stable household, with rules and accountability, is just not her thing.

There are many Ions and Dianes sprinkled throughout the Nickelsville archipelago. They make up the core population of the camps and constitute the vast majority of those who stay there for any length of time. They like it there, though, and in exchange for permanent “place” at Nickelsville – what irony! – they are willing to do SHARE’s bidding when called upon: promoting the camp’s interests before the City Council, giving guided VIP tours of the camp, getting their pictures taken at gala auctions. You know the drill.

In concluding I would just offer these words of advice to a budding MSW . . . that in order to find a “solution” to Nickelsville you must first understand something: It’s not about poverty and it’s not about government. Hell, it’s not even about housing. It’s about trying to create a safe place for people who simply don’t want to live indoors.

That’s where you have to start.

**That garden’s gone now, destroyed when Nickelsville Highland Park was razed by the City. What a waste.