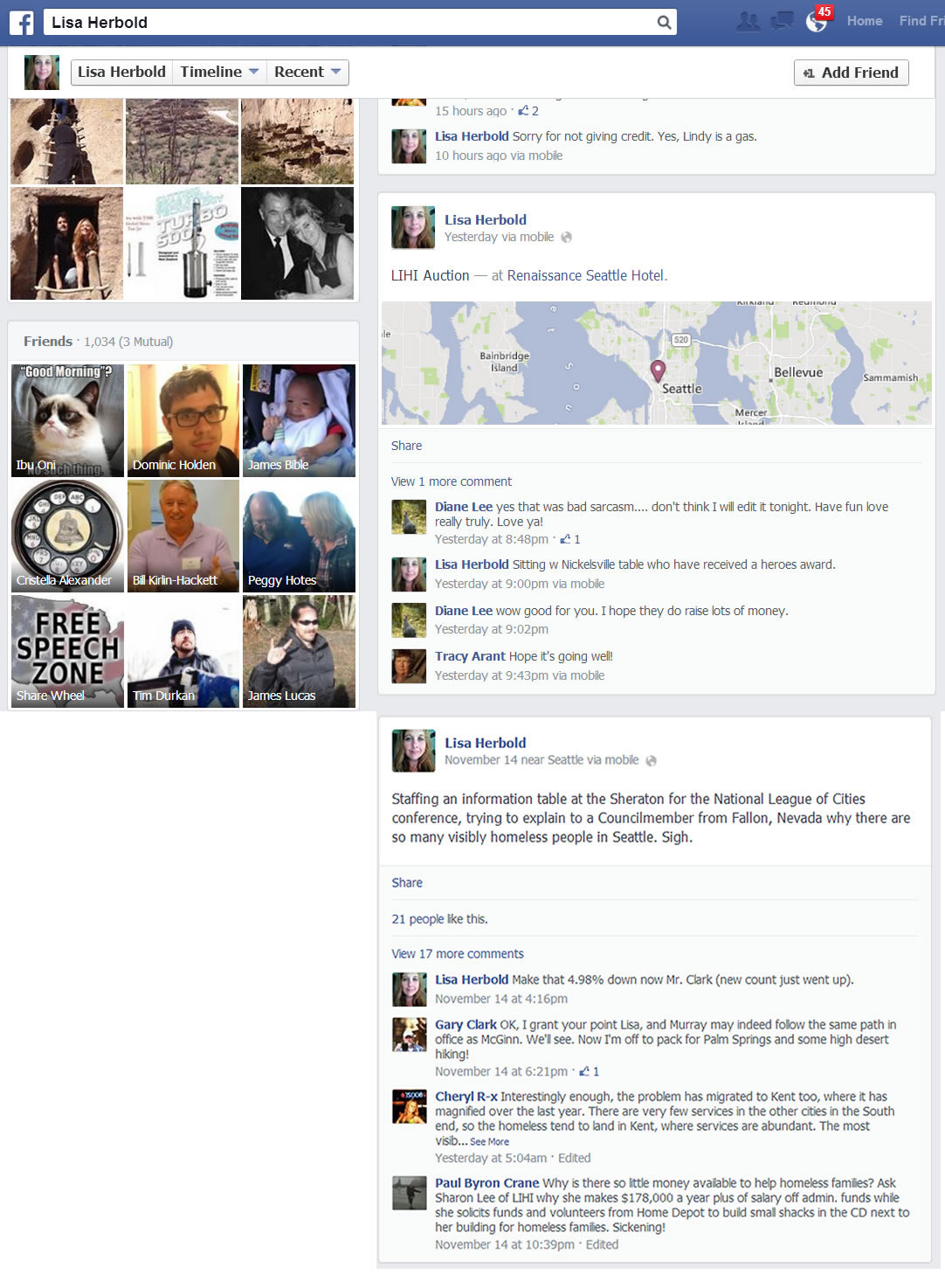 So what do we know about Lisa Herbold from her faKebook page? A lot of things, actually.

We know that Lisa ♥’s Scott Morrow, and vice versa.

They ♥ Lisa back, too. And why wouldn’t they? She’s helping them all get some more money. That’s what she’s doing at this auction, sitting with the Nickelsville table who uh . . . just received a “heroes award” . . . and a bunch more money.

You all remember Nickelsville, right? No? Here. Maybe this will refresh you.

By some weird coincidence (totally bizarre) Lisa Herbold happens to be the Seattle City Council’s go-to gal on Nickelsville and other concentra- er. . . I mean homeless camps run by SHARE. That means that whenever someone complains to the City Council about Nickelsville, or SHARE, or SHARE boss Scott Morrow, that complaint goes straight to the desk of . . . Lisa Herbold.

I kinda wonder if it’s good idea to let people in government who ♥ certain people in the private sector deal with official complaints against the people they ♥.

Or it’s like when a lady gets beat up by her boyfriend, and then she complains to the boyfriend’s sister about it. Well, the sister ♥’s her brother, naturally, but does she also ♥ the brother’s girlfriend? –Not so much . . .  So the sister tells her brother that his girlfriend is complaining about him, and then next thing you know . . .

Well, you already know what’s the next thing you know, dontcha?

So who else does Lisa Herbold ♥?

She ♥’s LIHI, obviously, or she wouldn’t be shilling for them at their auction.

You all remember LIHI, right? Low Income Housing Institute? That’s the extremely wealthy and powerful housing non-profit that was co-founded by Scott Morrow back in 1991. Why, just look at their 990 form. Look how much they got! Look at how much their execs make. It’s no wonder their ED Sharon Lee contributes to political campaigns around town, is it? God knows she can afford it. She probably doesn’t live anywhere NEAR the Nickelsville concentra– . . . whatever.

There’s so much love goin’ around here, it’s crazy. It’s like a fuckin’ commune. They should call themselves the Homeless Inc. Rainbow Love Israel Family, or something.

And LIHI ♥’s Nickelsville, too. Indeed they do. They ♥ Nickelsville so much that when the City evicted Nickelsville from Highland Park, LIHI let SHARE bring their little concentration ca- . . . er . . . I mean homeless camp onto some LIHI property downtown. And LIHI even let them bring children there too. Wasn’t that nice of them?

And LIHI ♥’s SHARE, too. LIHI received more than a hundred thousand dollars of City money in the winter of 2012 to pay to SHARE for emergency shelter, but when I asked   LIHI to show me some receipts for that money, they refused.

Dominic works for a Seattle newsweekly called the Stranger. You remember The Stranger, don’t you? Surely you do. (Oh gawd. Wasn’t it awful!) 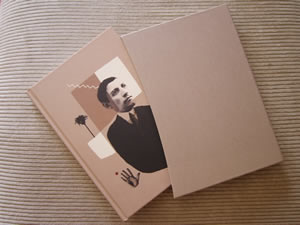 The Stranger is supposed to be reporting on things like government fraud and corruption. But that stuff can wait, because Dominic has been busy writing stories about “The Smartest People in Seattle Politics.” And guess who one of the smartest people is, according to Dominic. 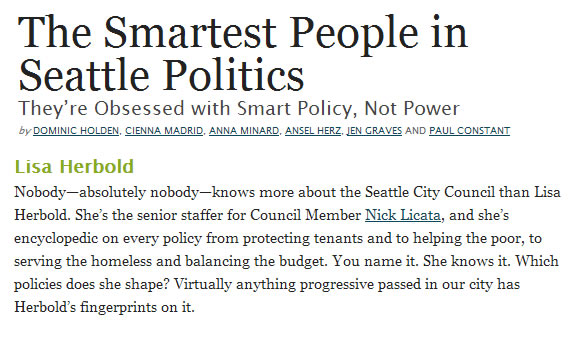 Can’t you feel the ♥? Don’t stories like this make you wish you were one of the smartest people in politics, too? Just like Lisa Herbold? And Scott Morrow? And Dominic Holden?

“Virtually anything progressive passed in our city has Herbold’s fingerprints on it.”

Yes. I’m sure that’s true, Dom. But I can tell you about some other things that have Lisa Herbold’s fingerprints on them, too. And I will tell you about those things, in good time.

And when you hear them, you’ll be like: Ew! That’s not progressive!

And I’ll be like: I know, I know. But what can you say? People do crazy things when they’re in love. 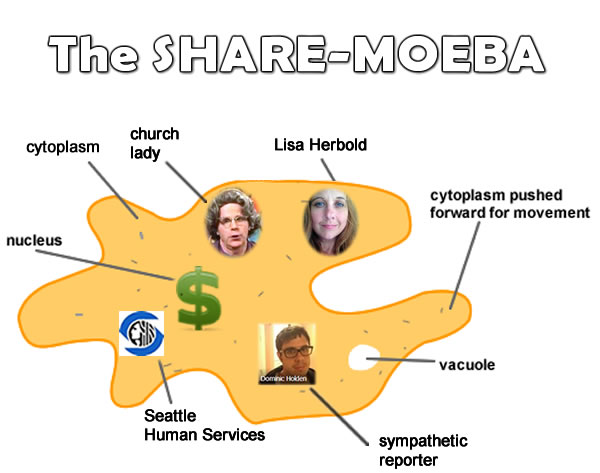